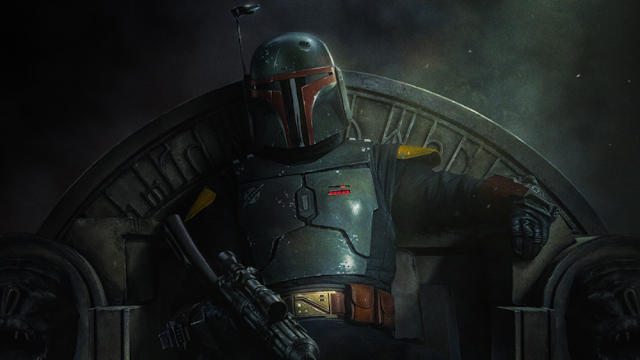 Personally, I’ve never understood the broad fascination with Boba Fett in Star Wars fandom. He looks tough and was badass in limited screen time in Empire. I’ve always felt the sparse, looming presence and few words went a long way to create an air of mystery and a certain mystique, and aside from that I've never found his appearances elsewhere particularly interesting. But his “end” in Return of the Jedi is so bumbling and unceremonious it’s laughable. But people are obsessed with him, so what do I know? Anyway, now Lucasfilm is attempting to retcon the bounty hunter into a good guy (or good-ish guy) and here’s the first trailer for the upcoming Disney+ series The Book of Boba Fett.
It’s Star Wars, so of course I’m going to watch this. The Book of Boba Fett is not something I’ve ever clamored for, but lots of people seem excited. This trailer looks similar in tone and style to The Mandalorian, which is popular, so your enjoyment may hinge on how you feel about the first episodic endeavor in that far, far away galaxy. I enjoy it well enough, so I’m cautiously optimistic here.

[Related Reading: 'The Mandalorian' Season 2 Trailer: This is the Way (and Baby Yoda is Still Adorable)]

Honestly, more than seeing Temuera Morrison reprise his most famous role, I’m stoked to see Ming-Na Wen back as Fennec Shand. She’s a cool character who showed up and looked promising, only to be pushed aside too quickly.

“The Book of Boba Fett,” a thrilling Star Wars adventure teased in a surprise end-credit sequence following the Season 2 finale of “The Mandalorian,” finds legendary bounty hunter Boba Fett and mercenary Fennec Shand navigating the galaxy’s underworld when they return to the sands of Tatooine to stake their claim on the territory once ruled by Jabba the Hutt and his crime syndicate.

With Boba taking over Jabba the Hutt’s turf on Tatooine, there’s sure to be plenty of callbacks to earlier Star Wars properties. My hope is that they don’t lean too heavily into that and actually do something new and interesting. We will see how that shakes out when The Book of Boba Fett debuts on December 29.

Posted by Brent McKnight at 8:21 AM