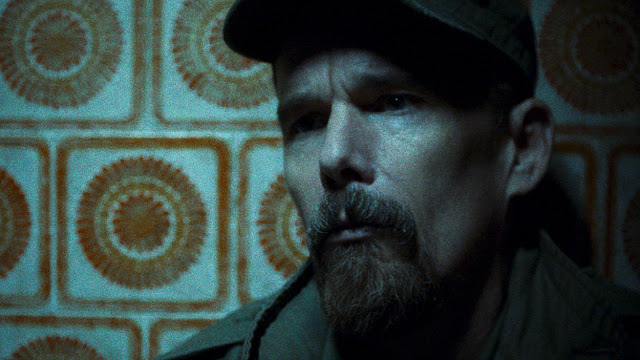 Abel Ferrara’s pandemic-shot terrorism thriller, Zeros and Ones, presents a difficult mystery to unravel. In the end, it remains to be seen whether or not finding a concrete solution is even entirely possible, but the sparse, lean, meditative tale offers an esoteric and, most importantly, compelling journey of obtuse motivations, dubious loyalties, and looming violence.

Ethan Hawke (Sinister) plays J.J., an enigmatic American military man stationed in Rome. Over the course of one night, he navigates the COVID-riddled nighttime streets to thwart an imminent attack somehow connected to his brother, Justin (also played by Ethan Hawke, First Reformed), a vehement radical with extremist ties. The plot unfurls like a quiet, contemplative, political Heart of Darkness as J.J. traverses the Italian capital, from one fraught, shadowy encounter to the next. 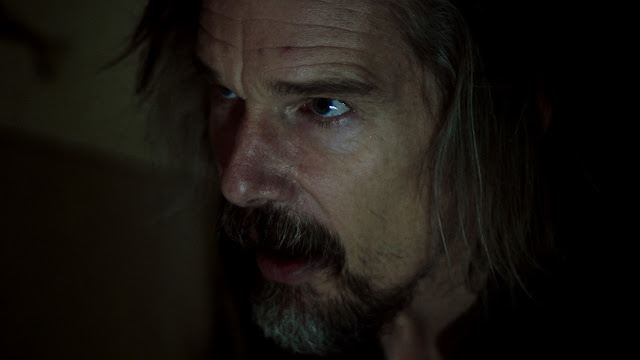 Both Hawke and J.J. wear grizzled, world-weary visages. The actor and the character shoulder the weight of the story and themes, but also the real-world epidemic, and it shows in visceral fashion. Hawke does double duty as the stoic operator on a mission, one who’s true aims remain ambiguous to say the least, and the unhinged, imprisoned Justin, ranting and raving against imperialist forces, and who may or may not still be alive.

COVID colors the entire film, both narrative and production. Gritty and grainy, shots and scenes feel stolen and illicit, pilfered when and where Ferrara and company could find them on empty Italian streets. Characters often interact via video-calls, which grounds the story in a specific moment, but also likely served a practical function during filming. J.J. dons an omnipresent mask, and at each stop has his temperature taken and douses himself with hand sanitizer. It paints a portrait of terrorist hunting in a time of a raging plague, piling a layer of tension on top of J.J.’s search.

[Related Reading: 'In a Valley of Violence' Movie Review] 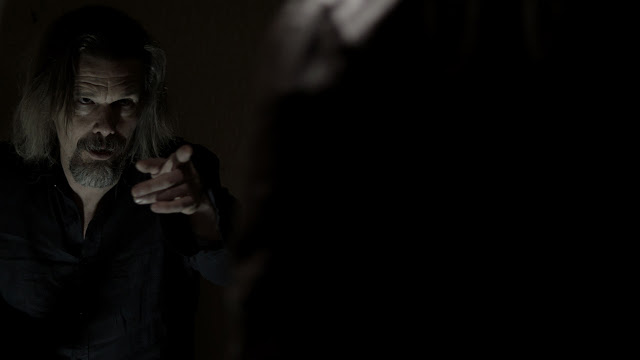 If nothing else, Zeros and Ones is an interesting illustration of ways to create during a pandemic and how to tell somewhat familiar stories in unfamiliar times, all with scarce resources at your disposal. Ferrara and cinematographer Sean Prince Williams (Good Time) shoot in handheld and close up, staging the action the tight, sparse locations available, using natural light, often with a minimum of people present. There’s an immediate, immersive, fly-on-a-wall sensation as the film unfurls.

Clocking in at 86 minutes, with an introduction by Hawke and lengthy opening and closing credits, this is more like 75. Tops. The earlier uses of words like sparse and lean aren’t hyperbole. And while the end result plays understandably thin, Zeros and Ones offers up intriguing ideas with which to grapple. Religious iconography peppers the film, as well as ideas of duality, loyalty, and more, and though they often ring hollow and unexplored, the film nevertheless offers a fascinating, often gripping watch. [Grade: B-]

Posted by Brent McKnight at 2:10 PM