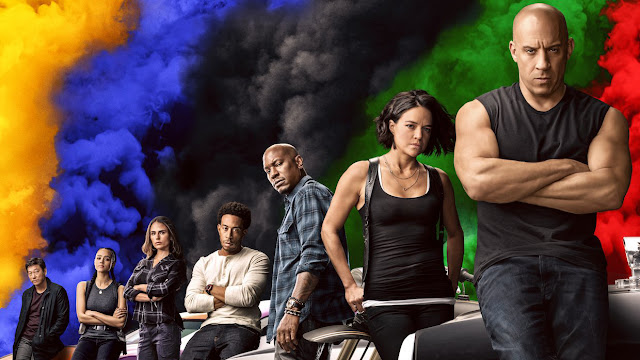 F9, yes, the ninth installment of everyone’s favorite family-centric saga of street-racers-turned-international-agents-of-espionage, is somehow both exactly as ridiculous as expected and even sillier than anticipated. This makes the movie simultaneously ludicrous over-the-top escapism and tediously overwrought nonsense drama. It’s a strange duality. We’ve come so far from the days of hijacking shipments of DVD players.

First of all, plot has largely become a secondary concern in the Fast & Furious universe. They went from drag racing to international heisting to being an integral part of the United States’ intelligence program. In reality, it’s all a framework for Vin Diesel, and his on-screen alter ego Dominic Toretto, to say grandiose things about family, stroke his own ego, and set up increasingly absurd, physics-defying action set pieces.

[Related Reading: 'Furious 7' Movie Review: Over the Top and Entertaining as Hell] 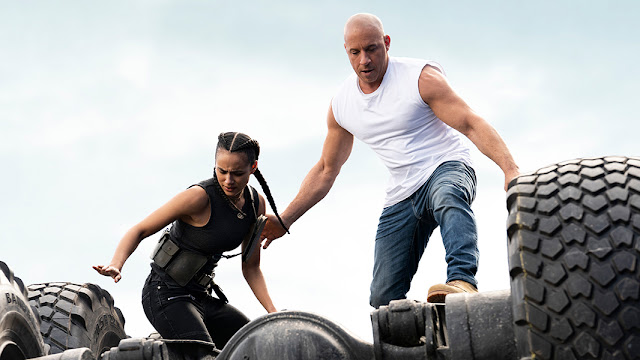 Second, to attempt to succinctly summarize the plot of F9: The Fast Saga, is a fool’s errand. Director, co-writer, and franchise mastermind Justin Lin and company cram a lot into 145 minutes. I cannot overstate a lot. It also relies heavily on what has come before, building on the ever-shifting mythology of the previous eight Fasts and leaning on an audience’s existing knowledge to the point those without an encyclopedic recall, or at least an extensive crib sheet, will likely be lost.

As is tradition, the film begins with our heroes thinking they’ve left this life behind for a more peaceful, tranquil existence. Their old life, however, comes calling. There’s yet another vaguely apocalyptic super weapon on the loose, and they have to mount up and save the day. A convoluted sequence of events involves the return of Cipher (Charlize Theron). Only the big wrinkle this time is that the main villain who wants this particular doomsday device is Jacob (John Cena), who just so happens to be Dom’s long-lost little brother. Sure, a guy who talks endlessly about family for eight movies (okay, six, he’s not really in 2 Fast 2 Furious or Tokyo Drift) not mentioning a brother is a stretch, but don’t worry, the film explores their backstory in great, tedious depth via flashbacks to the death of their father. 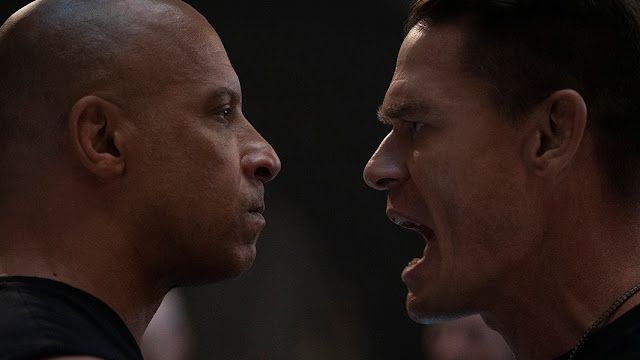 This is the main conflict that drives F9. Everything else serves this end, no matter how elaborate, twisted, and long-winded things get. And they get very, very long-winded. After the inciting event, which involves a jet picking up a car mid-air with magnets, because physics is meaningless, the larger group breaks up into smaller factions for various side quests. For instance, Letty (Michelle Rodriguez) and Mia (Jordana Brewster) head to Japan, while Tej (Ludacris) and Roman (Tyrese Gibson) visit Germany. Despite the careful planning, in the end their ultimate plan, as always, winds up largely half-assed and improvised.

Most of these side quests involve looking for an “old friend” of one stripe or another. Damn near everyone who has ever appeared in a Fast movie gets a scene. Queenie (Helen Mirren) shows up for a car chase. Santos (Don Omar) crawls out from whatever rock he’s been hiding under, though Leo is nowhere to be found. Sean (Lucas Black), Twinkie (Shad Moss, aka Bow Wow), and Earl (Jason Tobin) all make an appearance. Hell, FBI Agent Stasiak (Shea Whigham) pops in to say hi and there’s even a young Vince cameo in a flashback. Most of these are one-off callbacks and fan service, but a few, including the worst kept surprise that’s been spoiled in every last piece of marketing, play more substantial roles. 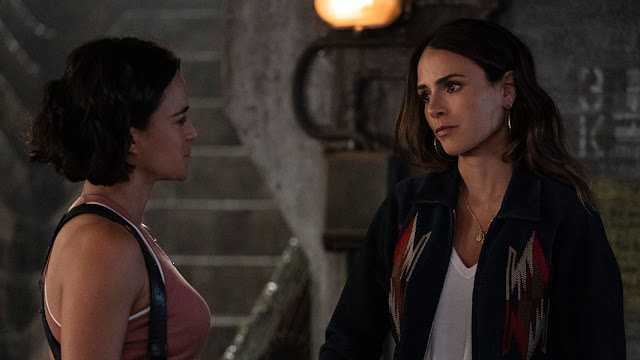 For his part, Dom’s “old friend” visit ties into his earlier life and in a lot of ways, his thread feels like a different movie from the rest. He mopes around in a maudlin family melodrama while the others fistfight and vroom vroom their ways through exotic locations and sticky situations. The whole thing is like Diesel’s ego splashed across the screen. Every scene with Dom plays like Diesel made demands and the filmmakers acquiesced. He gets his elaborate flashbacks and backstory, he has his oh-no-he-might-be-dead-we’re-all-sad moment, and even fights, successfully I might add, 20-plus armed soldiers at once.

Every single one of Dom’s lines is a grand, vapid platitude delivered with dead serious intention and comically overblown results. Seriously, F9 is what Vin Diesel sees when he closes his eyes at night, almost two-and-a-half hours of wish fulfillment and self-aggrandizement where he’s the center of it all. You can’t help but think he saw Hobbs & Shaw and had to outdo The Rock at every turn. In that regard, it’s bonkers how much one man’s ego steers an entire franchise. 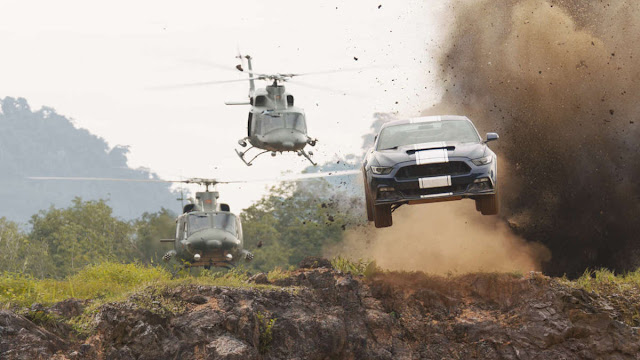 The climactic chase in Fast and Furious 6 is the moment where, in my opinion, the saga morphed into what it is now. For three films, it was about street racers, even as it tried to figure out its identity. In chapters four, five, and most of six, it became a grounded-ish outlaw story with heists and schemes. But when Dom catches Letty with his car and bodies collide mid-air without grievous bodily injury, the laws of physics flew out the window and the action transformed into the cartoon it has become.

Furthering this progression, F9 pushes things to heretofore unimaginable extremes. The action here is fully unhinged. No joke, there’s a scene early on straight out of Bugs Bunny, like if you run off a cliff, you won’t fall if you don’t look down style logic. The creative team no longer feels constrained in any way by whether or not a particular feat is physically possible. There are, in the Fast & Furious world, no longer any rules. At times that’s incredibly entertaining, but at others, it’s exhausting and cheap. “How do we get out of this predicament?” “I don’t know, let’s use magnets, that will work.” There’s no longer any tension because any option, no matter how outlandish, is on the table and because they always, always work—they never fail, they never get hurt, they never truly die. 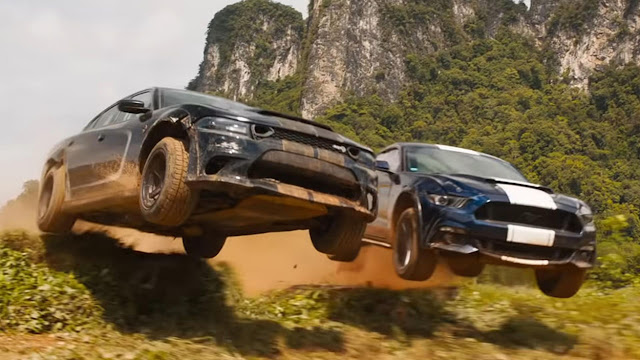 In this regard, as is so often the case, Roman becomes a mouthpiece for the audience. Sitting in the theater bearing witness to this deranged action spectacle, we’re aware of the inherent absurdity. Roman personifies the voice in the theater yelling, “you can’t do that, that’s impossible,” at the screen, only to be ignored. At one point, he muses that he, and by extension the rest of the family, may be immortal or invulnerable. This comes on the heels of his being closely surrounded by 14 guys with machine guns all emptying magazines at him from mere feet away, only to emerge without a scratch. (He says 14, in reality it’s more like eight, but the peril stays the same.) It’s a question we, watching this movie, also ask. Over and over again. He might not be wrong.

In my notes hastily scrawled in the dark of the theater, I scribbled: “Mission: Bond-Possible.” That’s what F9 wants to be—even down to bits of score that are clear riffs on the classic Bond theme. And to an extent, it does play a bit like a beefed-up take on the sillier Roger Moore-era James Bond pictures. For a franchise that found itself at an unexpected place—what series figures out what it is four movies deep?—it seems uncertain, unsure what to do next and what it is now. 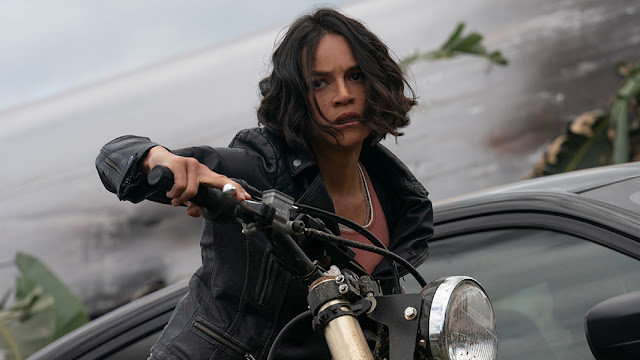 F9 is a mess. Bloated and brutally overlong, it vacillates between frantic action and dreary monotony—the side quests are not compelling and the middle drags on and on. When it peaks, the absurd action can be a blast. At other times, however, it’s stretches credulity too far and falls flat. Worse still, other moments devolve into visual incoherence. The bond between this rag-tag chosen family forms the endearing heart of the earlier movies, but this time out we’re left with empty lip-service and hollow bonds that rely entirely on what came before for even a whit of emotional resonance and good will. Every insipid line is THE MOST IMPORTANT LINE EVER, delivered with such unintentional laugh-out-loud faux-sincerity it borders on caricature. The result is a big, loud, dopey facsimile of better movies in the franchise, cranked up and over-exaggerated. [Grade: C]