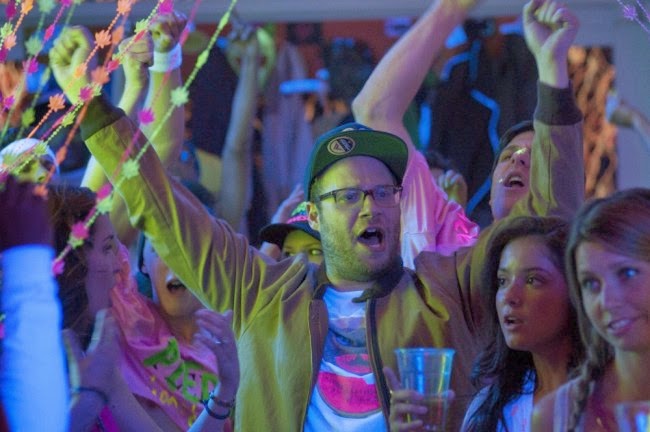 “Neighbors” is the big, raunchy, R-rated comedy you were hoping for this summer. Seth McFarlane’s “How to Die in the West” may challenge for that crown, but it has an uphill battle, because Nicholas Stoller’s latest film is a total, uproarious blast. Delightfully foul—like a dildo fighting, baby chewing on a used condom filthy—this is better written than you expect out of this kind of movie, and really better than it has any right to be. Normally, comparing a movie to a classic is a sure sign that it is nowhere near as good as the benchmark, but you can’t help but imagine that “Neighbors” is going to get called this generation’s “Animal House.” And it very well might be. If nothing else, it will make you laugh your ass off from beginning to end.

Mac and Kelly Radner (Seth Rogen and Rose Byrne) have their shit together. They’re married, just had an adorable baby, and recently purchased their dream home. Sounds like everything is hunky dory, and it is, until a fraternity moves into the house next door. Initially they’re cool—Mac and Kelly desperately want to not be as grown up as they are, and for a brief moment they form a sincere bond with their younger neighbors. It isn’t long, however, before the situation devolves into an epic, all out war between the Radner’s and Delta Psi, led by Zac Efron’s Teddy and Dave Franco’s Pete.

For all the gross out jokes and juvenile shenanigans, “Neighbors” has a feel similar Stoller’s “Forgetting Sarah Marshall,” not to mention a similar re-watch potential, and has an accessibility that will appeal to a wide spectrum. That is, as long as you don’t mind a few having obscenities hurled in your general direction in the process. These are relatable folks, on both sides of the fence. Mac and Kelly want the best of both worlds, to still be fun and relevant, but also have all of the responsibilities that come with being parents and adults.

Perhaps most impressively, “Neighbors” makes the frat guys more than just stock, one-dimensional types. You empathize with them. Sure, they want to party and get rowdy, but these are modern men, and, much like how the cool kids in “21 Jump Street” evolved into something different, so have they. Teddy represents a softer, gentler breed, a guy who isn’t afraid to talk about feelings with the pledges even as he forces the new recruits to march around dressed like half-nude elephants. And the central conflict isn’t just a one-sided affair. Over the course of the movie, the impetus and initiative swing back and forth a few times. Mac and Kelly call the cops because a party is too loud, the frat retaliates, the couple comes back at them, and the film follows that cyclical pattern. At one point the war is over and the hostilities have ceased from each camp. It isn’t ideal, but they’ve learned to coexist in close proximity. However, it’s Mac and Kelly who upset that balance simply because they’re bored.

Beyond being plain old funny, this balance is what makes “Neighbors” stand out from the pack. It isn’t just an us versus them plot, and illustrates that a story is never as simple as that. They may be jagweed frat guys, but even they have their own individual narratives and hopes and dreams. One of the most engaging subplots delves into the relationship between Teddy and Pete—Teddy is stuck in frat-president mode and can’t see beyond graduation, while Pete is preparing for life after college. You don’t get that kind of parity in movies, especially gross-out comedies like this, all that often. There’s an adorable earnestness to their friendship. And as strange as it sounds to say this, you walk away thinking that Zac Efron can actually act, in addition to being an absurdly handsome human male.

For Rogen, “Neighbors” represents a sort of maturation. I said sort of. He is very much in a similar spot as Mac. He wants to have it both ways, with the crass, gross-out humor that he’s built a career on, while recognizing that he, like much of his fan base, is getting older. This is a kind of steppingstone between those two worlds. You can relate to it because you like dick and fart jokes, but also because you’re raising a family and have ever-increasing responsibilities. On the other side, younger fans will find comparable strings to cling to with the frat guys.

“Neighbors” is raucous, rowdy, and funny as hell, but it still manages to have heart once you strip away the foul-mouthed layers. This is the kind of movie that you’ll want to see in the theater then buy and watch at home over and over again. In a summer full to overflowing with big action spectacles and superheroes galore, “Neighbors” is a perfect counter to that, and lets hope that it finds the audience it deserves.

Posted by Brent McKnight at 9:22 PM