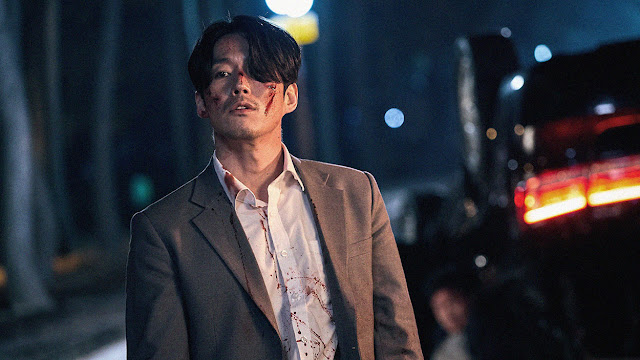 Just a heads up right out of the gate, Paid in Blood has been marketed as a fast-paced action film, which it is decidedly not. Despite a few quick flurries, there’s really only one straight-up action scene. More than that, director Yoon Young-bin’s film, also known as Tomb of the River, aims to be more of a taut, sprawling underworld epic. It eternally lingers right on the verge, on the precipice of violence, but even punctuated by quite a few stabbings, they’re honestly pretty low-key as far as stabbings go.

As far as plot goes, things are pretty basic: In the South Korean criminal underworld, two factions face off for control of valuable turf. Kim Gil-seok (Yu Oh-seong, The Great Battle) runs his crew out of Gwangyang. When Lee Min-seok (Jang Hyuk, The Swordsman, The Killer) brings his set into town from Seoul, conflict arises. 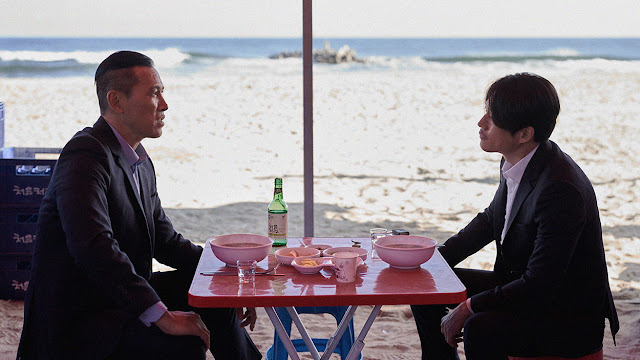 The primary clash comes from the differences between the two main characters. Protagonist Gil-seok is not much of a gangster. He’s chill, doesn’t want to cause a ruckus, plays by the long-established rules, and is in reality more akin to a businessman than a crime boss. To be honest, he’s not particularly interesting as a character either, choosing to remain passive and simply let things happen without much of a reaction. You’d think perhaps that’s the point, that his arc is being pushed to the point where he must take decisive action, but…like maybe. But not really. What modicum of change occurs, is too little, too late.

Min-seok, on the other hand, is a wild card. Those stabbing mentioned earlier? He’s the one holding the knife for most of those. A debt collector by trade, he’s vicious and ruthless, using his leverage over the debt-ridden to force them to take the fall for his crimes. For example, he’ll murder a rival and in exchange for clearing what they ow, some desperate sucker will confess to the crime. Of the two, he’s the most fun to watch, but still lacks things like motivation and purpose. Sure, he wants all the power, but mostly he wants all the power just to have all the power, without the appearance of any more substantial reason than that. Ultimately, neither Gil-seok nor Min-seok is all that interesting, and that’s a problem. Within this relatively simple mano-a-mano framework, there are also various underlings, side stories, shifty loyalties, hidden agendas, and all the usual grab bag of crime movie complications. It aims to be a wide-reaching gangland thriller full of tension and escalating stakes, but instead of being intricate, it plays convoluted; instead of gradually ratcheting up the pressure, it plods along. The whole plot exists to throw these two people into conflict, but it constantly edges up to the abyss, to a point where it looks like things are going to kick off and deliver on all this set up, only it backs away time and again. Eventually, after this happens again and again, it’s hard to care or work up much enthusiasm for what happens on screen.

There are promising pieces in place. Paid in Blood is a nice-looking movie, slick and well put together; the acting is strong across the board; and the core idea could be interesting. Emphasis on the word could. It aims for deep philosophical reflections on violence and evil and the life these men have all chosen, but it never comes together in any meaningful way, and instead spends an hour and 59 minutes being almostinteresting. [Grade: C]