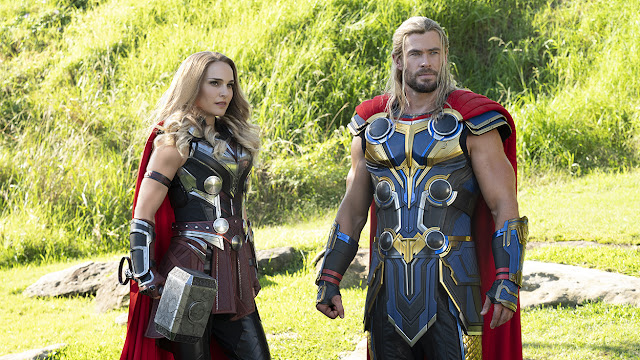 Do you have one of those friends who tells a joke, and when you don’t laugh, they proceed to poke you in the ribs, like, “Huh, right, get it? Get it?” If you know this person, or have seen countless iterations of them on TV and in movies, that’s the general sensation of watching Thor: Love and Thunder, the latest in Marvel’s candy-colored, Norse-mythology-inspired arm of their cinematic universe. The entire film, and by extension director Taika Waititi, feels like it’s just going to stare at you awkwardly until you force a weak chuckle then it will bask in the glory of its own wit.

In short, it’s very, very pleased with itself and believes itself endlessly clever. But for all its bombast, CGI eye-candy, and bravado, the on-screen result is a tepid, lackluster superhero yarn. Waititi and company attempt to recreate the fun and irreverence of Thor: Ragnarok, only to force the issue to the point where it becomes tiresome at best and insufferable at worst, which is all too often. 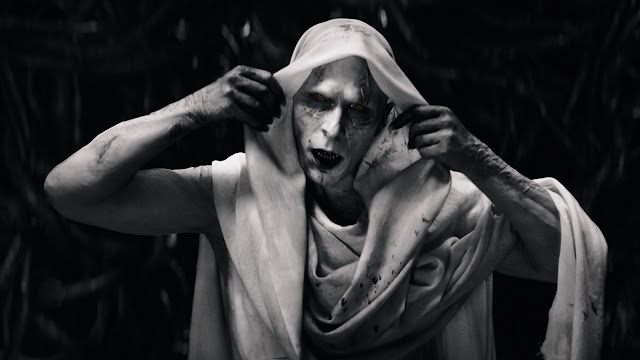 Love and Thunder picks up with Thor (Chris Hemsworth) still tooling around with the Guardians of the Galaxy crew, having adventures, and popping into conflicts to save the day. He bounces when Gorr the God Butcher (Christian Bale) starts, as his name implies, killing all the gods. The hunky blond deity enlists the help of his old pal Valkyrie (Tessa Thompson), as well as his ex, Jane Foster (Natalie Portman), who now wields Mjolnir and has become Mighty Thor. Their travels take them various places across the universe, including to the pantheon of Greek gods, headed by Zeus (Russell Crowe doing just an insane, and not in a good way, accent).

Hemsworth obviously finds a great deal of joy in this character. He’s having the time of his life and that shines through as he plays Thor with lunkheaded, affable charm. Thompson underscores Valkyrie’s sardonic deadpan with a current of sadness, longing, and ennui that makes her much more interesting to watch. Portman got jacked as hell to wield Mjolnir and gets to mix it up with film’s various pixelated monsters, throwing down as well as anyone. Love and Thunder is best when these three are together, bickering, bantering, and Thor and Jane having a slew of awkward ex moments. This trio has a strong chemistry, which carries the bulk of the film. 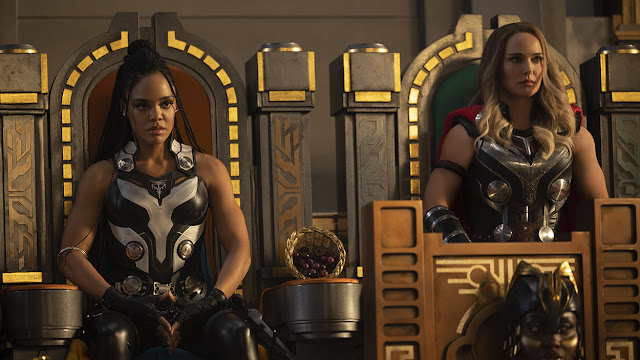 Bale unfortunately falls into a trap far too common in the MCU: He’s a villain who feels more like an afterthought than a fully realized character. Which is a shame because he’s giving his all, and the general aesthetic is as creepy and dark as one might expect from a man driven to slaughter the divine. But for all the surface affectations, he has little personality and the motivation that sends him down this path has not only been done countless times but isn’t even done particularly well here. There’s potential to create a sympathetic antagonist, someone who connects with the audience and maybe, just maybe, has a convincing argument. But the script never takes the time or care to develop anything more and he winds up another disposable Marvel could-have-been bad guy.

When it boils down, that’s the biggest problem with Love and Thunder, it’s much more affect than substance. It hits all the markers that make the previous Thor movie so entertaining—bright colors, big computer-produced action gobbledygook, omnipresent needle drops (there are no less than four Guns ‘N Roses musical cues, among many, many others)—but there’s nothing to back it up. There’s no emotional hook; there’s little going on beyond what’s right there, slapping you in the face; and nothing carries any weight, not even the lingering reasons behind the Thor/Jane reunion, which is… let’s call it a questionable choice. And amidst this, Waititi and co-writer Jennifer Kaytin Robinson shoehorn in an onslaught of wearisome shenanigans, like a running gag about screaming goats that isn’t funny the first time, and certainly isn’t the tenth. 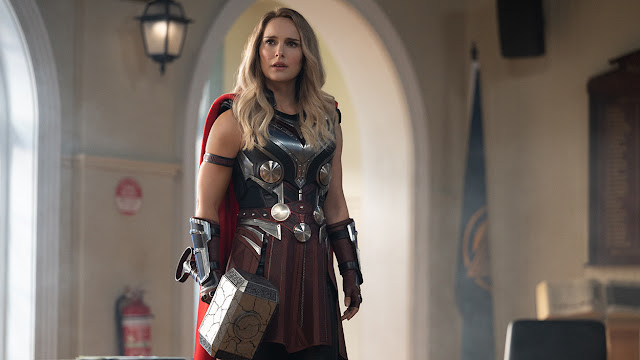 Thor: Love and Thunder isn’t terrible (it’s a welcome step up from Doctor Strange 2, for example), but there’s nothing memorable in the slightest, and nothing stands out or leaves any lasting impression. It’s a movie you see then immediately begin to forget. [Grade: C]

A note on the post-credits scenes: I won’t get into specifics about the ubiquitous Marvel post-credits scenes, but I have concerns about where the MCU is heading. So, I’m going to speculate and spitball for a moment. In my Doctor Strange in the Multiverse of Madness review, I wrote that it feels like they’re spinning their wheels, waiting for something to take hold in the popular imagination so they can let that thread play out, and that for the first time it feels like there’s not as concrete a plan to move forward. Head honcho Kevin Feige recently said in interviews that the MCU’s new direction will become clear in the “coming months.” Maybe it’s just me, but the impression this statement left was that we would see that begin to manifest in Thor: Love and Thunder. If that’s true, and if that does indeed connect with the first of the two stingers, oof, I kind of hate it and I really hope I’m wrong. But we can discuss this further when people have seen the movie.

Posted by Brent McKnight at 1:34 PM

My favorite part of this movie was when Thor said "Get ready lads, it's thundering time" and then thundered all over everyone
I really love the love and thunder thor series. I wish it had taken a more severe turn because I agree with the villain’s perspective and it would have been amazing to see him as a more developed character.