At a glance, the story of Ana Lily Amirpour’s Mona Lisa and the Blood Moon is relatively straightforward. When Mona Lisa Lee (Jean Jong-seo, Burning) escapes a mental institution, she finds herself alone and struggling to survive on the streets of New Orleans. From those simple beginnings, however, things become much more complicated, dreamy, and strange. In part, at least, because Mona Lisa has unusual abilities, she can control other people and make them do things.

More than plot and narrative beats, the early going of the film concerns itself with tone and texture. Wide-angle lenses, long dissolves, eerie, esoteric songs, and more create a sensation of a heightened, highly stylized version of reality. Amirpour luxuriates in the New Orleans of it all, from the debauched chaos of Bourbon Street, to a low-key laid-back crew chilling outside a corner store, to banks of the Mississippi under the Crescent City Connection bridge, the sense of place permeates every frame, setting the stage and crafting the vibe. Before the primary narrative thrust kicks in, the film, and its protagonist wander and roam, soaking it all in. 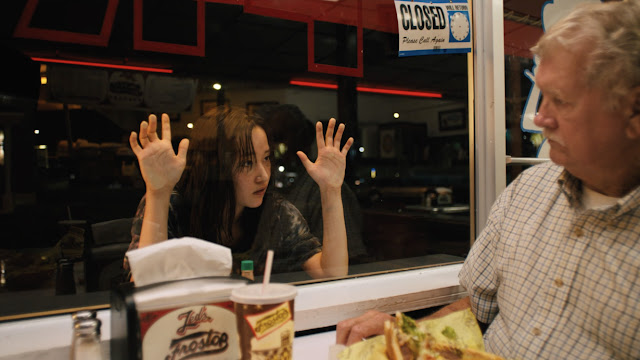 At its core, Mona Lisa and the Blood Moon is about control, specifically individual bodily autonomy. Mona Lisa can take control of other people; while they know what they’re doing is wrong, they’re powerless to stop it and understandably freaked out by the sudden loss of self-governance. At the same time, through drugs, doors, straightjackets, and confinement, the mental institution seeks to control Mona Lisa in a similar fashion. A stripper named Bonnie (Kate Hudson) manipulates Mona Lisa to her own financial gains at the strip club, and Officer Harold (Craig Robinson), hot on her trail through the whole film, wants to arrest, confine, and otherwise constrain her. Mona Lisa must rest back self-rule from those who have or seek to usurp it and exert her own force over her surroundings.

On the other end of the spectrum, there are characters like Fuzz (Ed Skrein). A stony low-level street dealer and wanna-be DJ who, initially he looks to be another person out to use Mona Lisa, but is much more pure of heart and earnest in his aims, fascinated by this person before him. Or Charlie (Evan Whitten), Bonnie’s young son, who has an almost terrifying amount of freedom under the non-watchful eye of his freewheeling mother. They never seek to force her to conform to their ideals, content instead to accept her as she is.

[Related Reading: Ana Lily Amirpour's 'The Bad Batch' Trailer Had Me at Keanu Reeves as a Post-Apocalyptic Cult Leader'] 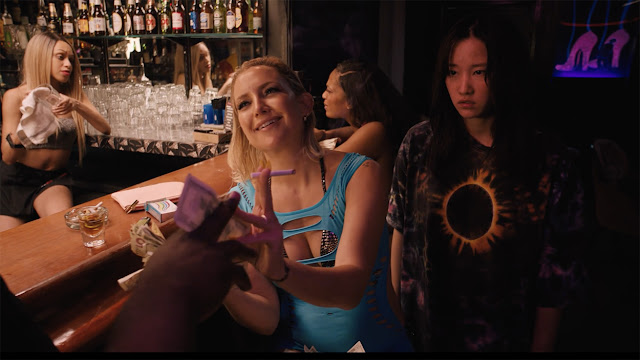 With a nebulous backstory that’s only ever hinted at with a few striking clues, Mona Lisa presents an intriguing cypher. But with all the mystery and questions, and strange abilities, Jeon grounds her. Despite everything, we feel her frustration and pain, but also her joy in the world she experiences and the bonds she forms. Strong supporting performances surround her—Whitten is remarkably good; Hudson infuses Bonnie with a tough, world-weary front that masks a deep, sweaty desperation; and Skrein has just the best damn time as Fuzz—but Jeon carries things, cutting a compelling if curious figure in the night.

Between A Girl Walks Home Alone at Night and The Bad Batch, Ana Lily Amirpour is a must-watch filmmaker around these parts, and Mona Lisa and the Blood Moon further cements that status. (Seriously, where's her damn Cliffhanger? We’re waiting.) This certainly won’t land the same for everyone, and the meandering, esoteric gauze definitely won’t work for many, but damn, I dig the hell out of this movie. [Grade: A]

Posted by Brent McKnight at 8:40 AM