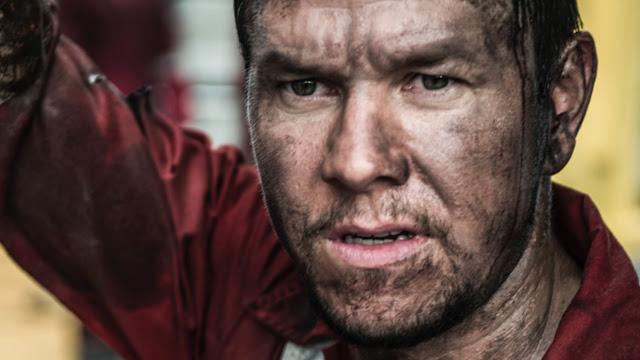 As a filmmaker, Peter Berg is in love with the process of things. He fills his films, even Battleship, with meticulous, methodical sequences, like a helicopter refueling early on in his latest tale of real-life disaster and heroism, Deepwater Horizon. An affection and even tenderness washes over what amounts to little more than a mechanical interaction between man and machine.

Similarly, Berg is in love with dismantling things, specifically the male body. He puts the same near-loving, borderline-fetishistic care into absolutely pulverizing the Navy SEALs in Lone Survivor, breaking them apart piece by piece. And Deepwater Horizon features the same care and carnage. He also adores just beating the shit out of frequent collaborator Mark Wahlberg. Good god, that man goes through hell in Peter Berg movies—what do they have lined up for Patriot’s Day? 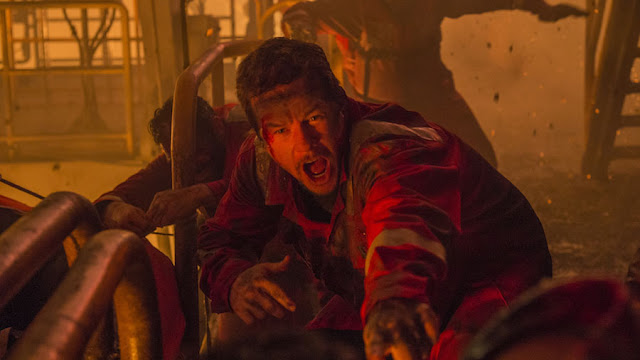 Deepwater Horizon tells the story of the 2010 BP oil spill that dumped 49 million barrels of oil into the Gulf of Mexico over the course of 87 days. More than the disaster, the film focuses on the men and the (at least according to the movie) lone woman on board the titular floating drilling platform, the sequence of events leading up to the initial explosion, and the crew’s struggle to escape.

Mark Wahlberg plays to his strengths as Mike Williams, a good husband, father, and all around family man just trying to make a living. Kurt Russell turns in a fantastic grizzled, handle bar mustachioed turn as Mr. Jimmy, the big boss on the rig—he may be tough, but his guys would all crawl through hell for him. Gina Rodriguez’s Andrea Fleytas essentially drives the rig, Dylan O’Brien plays a new guy, Ethan Suplee shows up as another crew member, and there are a bunch of bit players who only have names because there are real-world counterparts. 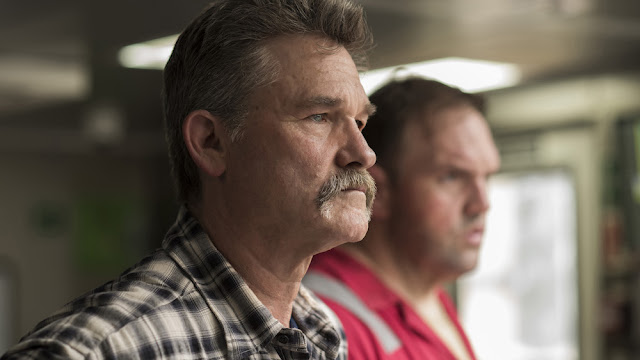 Though there’s nothing much too these characters—we only see Mike and Andrea, briefly, beyond the confines of work—they have a nice banter and solid chemistry. The screenplay from Matthew Michael Carnahan and Matthew Sand gives the dialogue an authentic lived-in feel, and we know enough about the characters from their interactions that we don’t need pages of backstory. After all, nuanced individuals are not this movie’s main concern, explosions, mayhem, and gut-wrenching physical injury are the order of the day.

Class conflict burbles under the surface, eventually boiling over. Berg, as he often does, paints the blue collar working man as good and noble, knowledgeable and capable—they’re practically flawless. On the other hand, he casts the BP officials as clueless bureaucrats at best—like two middle-management suck-ups on board for a photo op—and maniacal villains with a willful, deliberate disregard for the consequences of their actions at worst. Seriously, every moment John Malkovich’s Donald Vidrine appears on screen, channeling his inner Wicked Witch of the Bayou, he’s half a second away from cackling and tenting his fingers. The capitalists-versus-laborers conflict is simple, but, like the characters, gets the job done well enough. 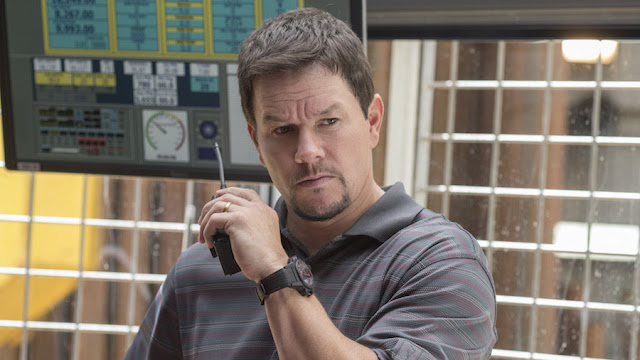 Deepwater Horizon truly shines when it gives up trying to be something bigger, something lofty and idealistic, and settles into its role as a throwback disaster flick. It’s here that Peter Berg hits his stride, crafting tense, raw action scenes as the crew attempts to stop the bleeding as it were and fight their way to survival. Like a less frantic, more coherent Michael Bay, Berg makes the audience feel the impressive fiery force of nature. And when it crests, Deepwater Horizon thrills with visceral panic and chaos, and hellish apocalyptic imagery.

Anything outside of the scenes on the oil rig, however, remains superfluous and distracting. Deepwater Horizon sets Mike up with an idyllic wife (Kate Hudson) and daughter—just enough to give him something concrete to live for. Fine as bookends, the script tries to sew this threat into the larger fabric of the story, despite the fact Hudson has nothing to do but generic cut-scene handwringing. Cloying and tedious, these moments pull the viewer away from the main thrust of the narrative. We already know the specifics of Mike’s struggle for survival, and watching his bland, boring wife worry adds nothing and lessens the fraught tension of the nightmarish inferno. 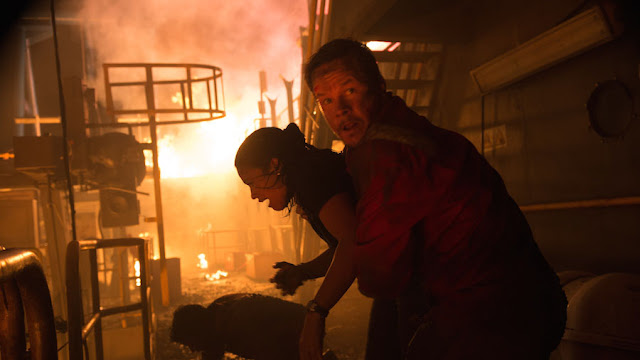 Berg wants to celebrate the heroism of these men and make a grander point about the perils of the profit-over-consequences corporate mentality, an endeavor that meets with moderate success. The true cost of greed takes center stage—in both human life and unprecedented environmental destruction—and Deepwater Horizon is sure to piss people off anew as it puts a personal face on this unprecedented catastrophe and rams home that the people responsible faced shockingly little blowback.

The use of archival footage and photos at the end—similar to Lone Survivor—feels overly blunt and unnecessary. We witness the resilience and survival against incredible odds, and the film is largely respectful to the eleven crewmembers who lost their lives. This add-on just feels like being told again what we’ve already been shown—Deepwater Horizon does a good enough job of that on its own without needing to resort to cheap tricks and sentimentality, however innocuous.

Though this one element feels like forced rah-rah enthusiasm (it’s almost like the film says, “Look at these faces, these are real people, if you don’t like this movie, you’re an asshole”) and the overall package is uneven, Deepwater Horizon toes a fine line between honoring a real-life tragedy and being one of the most exhilarating Hollywood disaster movies in recent memory. [Grade:
B]

Posted by Brent McKnight at 9:39 AM