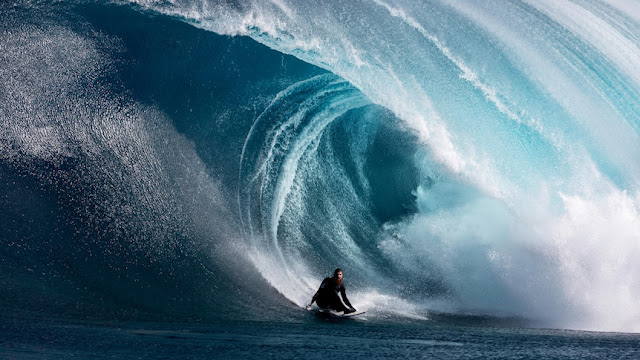 I’m not a surfer. It’s one of many, many things I’ve always wanted to try but have never actually got around to. (It doesn’t help I’m from a not-particularly-surfy place.) But on film, the sport shows as beautiful and serene; a perfect love letter to the majesty of nature. It’s also often harrowing and reminds us of the true power of that natural force. Bentley Dean’s new documentary, Facing Monsters, captures all this splendor, all this peril, as well as one man’s connection to the waves that runs as deep as any ocean.

There’s plenty of cinematic documentation of surfers going bigger, farther, more extreme; padding out into increasingly hostel tides, near-tsunami-sized breakers, even using jet skis to get to previously inaccessible aquatic terrain. For the likes Laird Hamilton, the late Eddie Aikau, and more, this goes beyond a hobby or a sport or even a lifestyle; riding giants is a calling, a purpose. And Kerby Brown definitely belongs on this list. 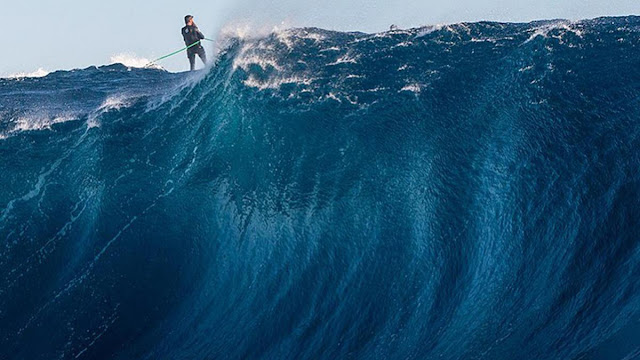 Slab wave surfing is a phenomenon with which I was wholly unfamiliar. The basic premise is, a wave crashes into a shallow reef or submerged outcropping of rock. This impact forces the water up with a fervor, creating big, intense waves that offer short-but-extreme rides that often play out in just a few feet of water and end up against cliffs or reefs. If that sound gnarly, that’s because it very much is. It’s one of the riskiest, most exciting forms of surfing, and it’s where Kerby plies his trade.

Facing Monsters begins like so many of these documentaries, by showing the Australian surfer doing his thing, explaining that thing to the unfamiliar as it goes. It then gets into his background, childhood, and all the usual stuff. It’s interesting enough, but what truly grabs the viewer here are the visuals. This is a stunning movie to behold. The way the cameras capture the waves; the expansive, isolated nature of the remote breaks; the grandeur and power of the ocean, is a spectacular sight. The frame soars above and below the waves, and lenses attached to Kerby and his buddies in support roles, like on jet skis waiting to tow him in or pull him out, place us in the midst of it all, offering immersive immediacy. Even non-surfing moments are shot and framed with grandiosity and bravado; something as simple as a shadowy outline of Kerby, backlit by the roaring flames of a bonfire, creates a sense of scope and scale as he tells his tale. 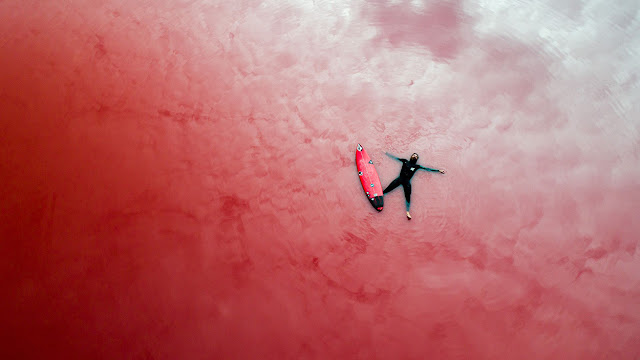 But the real hook, the true emotional resonance of Facing Monsters, surfaces when it digs into Kerby’ psyche, that of a singular man who goes to such extremes more or less for kicks and his own satisfaction. This isn't a lucrative existence. A fascinating, driven individual, the film offers an up-close, intimate, warts-and-all portrait. We watch the profound, lifelong bond he has with the tides and currents, and witness not only how it impacts and shapes his life, but also the lives of those closest to him. As one might imagine, such a focused, single-minded personality is not always easy to be around and love, and it’s riveting to see all the struggles unfold.

After a serious injury, which is one of the most terrifying, suck-the-air-from-your-lungs scenes I’ve encountered in any film, let alone a documentary, watching Kerby grapple with an uncertain future is both harrowing and heartbreaking. Does he keep going, pursuing the thing that’s always given his life the most meaning? Or does he hang up his board for his own health, not to mention the well-being of his wife, his kids, his friends, his father, all of whom have had to come to terms with how he lives? It’s every bit as impactful watching them wrestle with how to approach him on this subject. They don’t want to tell him to knock it the fuck off or he’s going to kill himself, but they so, so obviously want or need to tell him to knock it the fuck off. From outside it sounds so simple, on both sides—he should just quit, they should just tell him, right?—but the movie does the work setting up precisely how much this means to him, how much it’s saved his life even as he continually puts it at risk.

[Related Reading: 'All the Streets are Silent' Documentary Review] 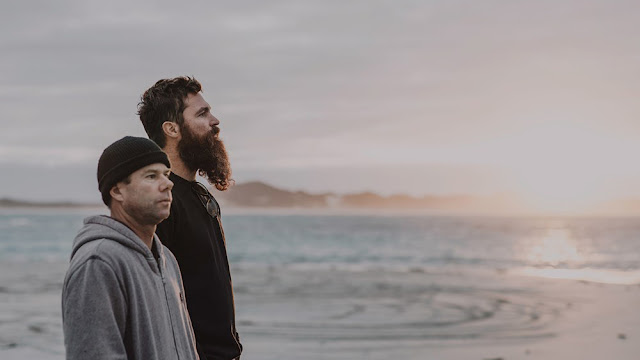 Facing Monsters may not break the mold, but it does exactly what this type of documentary should do and does it incredibly well. It focuses on a remarkable, charismatic individual engaged in a fascinating, unusual pursuit; it digs deep into what makes him tick, what truly drives him to push boundaries; and creates a sincere emotional reverberation in the core of the viewer. The cherry on top is that it’s an absolute stunner to behold and one of the best films of the year. [Grade: A]

Posted by Brent McKnight at 7:27 AM