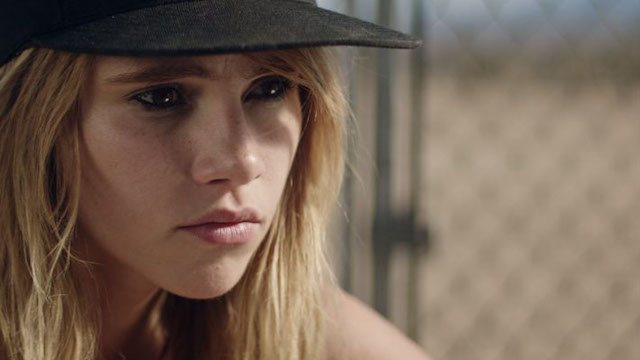 Did I jump the gun a bit putting Ana Lily Amirpour’s black-and-white, pseudo-western, Iranian vampire indie A Girl Walks Home Alone at Night on my Top 25 Movies of the Century So Far list? Probably. But I love the shit out of that movie. And I am, understandably, excited for her follow up, The Bad Batch. It just debuted at Venice (with an appearance at both Fantastic Fest and the Toronto International Film Festival on the horizon), and we’ve got two new clips to gawk at and salivate over.

Set in a post-apocalyptic wasteland—think a twee, indie Mad Max kind of place—The Bad Batch follows a young woman who is kidnapped by cannibals only to escape and crew up with another band of misfits. Perhaps now you realize why I’m so stoked on this.

The Bad Batch also has a crazy, eclectic cast. It includes Suki Waterhouse, Jason Momoa, Keanu Reeves, Giovanni Ribisi, and Jim Carrey. Yes, Jim Carrey. It’s being described as a near silent movie with almost no dialogue, which is readily apparent from these clips.

The first shows off a sort of post-apocalyptic muscle beach. These folk apparently aren’t going to let the fall of civilization prevent them from getting swole.

The second provides a sense of place, tone, and style. And again, this is right up my alley—artsy, esoteric, and post-apocalyptic.

We don’t get much in the way of plot or character, but these two glimpses certainly give us a feel for what’s in store in The Bad Batch. If you’re after more concrete details, here’s a lengthy synopsis:

A girl walks across a cannibal-infested desert at midday…. Ana Lily Amirpour’s highly anticipated follow-up to A Girl Walks Home Alone at Night feints in the direction of sensationalistic horror — and, be forewarned, blood is spilled and limbs are hacked — but The Bad Batch, like Amirpour’s deliciously low-key debut, uses genre as a springboard for high style and social commentary.

The aforementioned girl (Suki Waterhouse) is one of thousands of Americans deemed unacceptable to civilized society. While wandering in her desert exile, she is captured by a community of cannibals. She manages to escape, soon ending up at a very different enclave of outcasts. Our heroine is safe here, but still does not quite feel that she has found her tribe.

On an excursion beyond the gates of her new shelter, she encounters one of her former cannibal captors (Jason Momoa), who ends up requiring her help. But can she do it without one of them getting slaughtered in the human-eat-human world where savagery is considered central to survival?

The Bad Batch is making the fall festival rounds, but there’s no word on when it’s going to venture out into the wider world. But produced by Megan Ellison and Vice Films, it has a decent amount of hype behind it, so hopefully we’ll know more on that front soon.
Posted by Brent McKnight at 9:34 AM