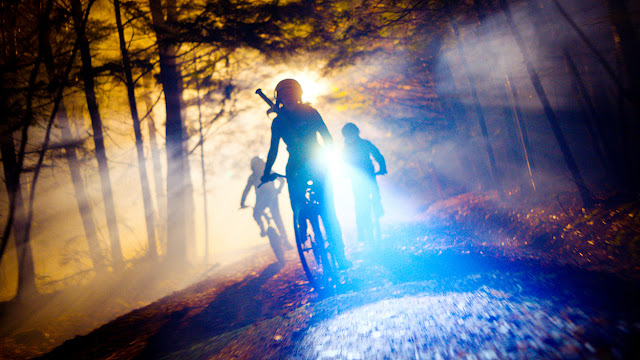 All the important bits are right there in the name: Kids vs. Aliens. There are kids, there are aliens, and they fight. That’s the gist of director Jason Eisener’s first feature since 2011’s Hobo with a Shotgun. (If you haven’t checked out his excellent docuseries Dark Side of the Ring, do so, even if you’re not a wrestling fan.) Like his previous endeavor, though in decidedly less brutal fashion, what works best here is a total blast, but at times the thesis statement of the title wears a bit thin stretched out to 75 minutes. (And sans credits, it’s more like 68.)

Friends Gary (Dominic Mariche), Jack (Asher Grayson), Miles (Ben Tector), and Gary’s sister Samantha (Phoebe Rex) are a wrestling-obsessed crew who spend their day making elaborate horror movies. A few years older and growing more interested in putting childish things behind her, when a group of popular teens, led by the hunky douchebag bully Billy (Calem MacDonald), approach Samantha about hosting a party while her parents are away, she can’t say no. That party, as is the cinematic way, turns into a rager, and said rager is, in turn, attacked by aliens. 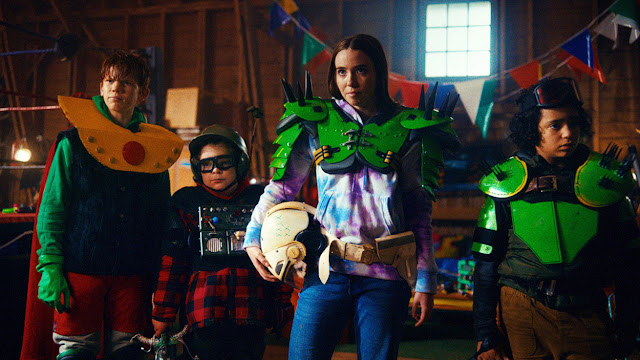 This is the kind of story I especially appreciated as a kid. With basically no adults—there’s one scene to explain the rampant absenteeism of Gary and Samantha’s parents, but that’s about it—it lets the kids have their day and be the heroes without grownups swooping in at the last minute. They have the chance to be resourceful and brave and lead the story, like so few kid-centric movies allow their characters to do. Eisener and co-writer John Davies are also not afraid to put the kids in actual danger, which lends the proceedings an always-appreciated edge of legitimate peril. (Also, I would 100% watch the hell out of the movie they’re making, it’s basically a group of Road Warrior style wrestlers fighting humanoid dinosaurs in a post-apocalyptic kind of sci-fi joint. It looks rad.)

With a group of actors this young, the performances are understandably a mixed bag. Gary and Samantha are the primary focus, and Mariche and Rex give the two strongest turns; they’re also the most experienced of the group. The friends have an easy, earnest bond, if not a particularly deep one. As every group has that one foul-mouthed kid, we have Miles. Don’t get me wrong, kids swearing is objectively hilarious, that’s an indisputable fact, but so often the movie forces it and Tector stumbles. Though, that’s less about the performance and more about the script. Still, these moments often come across as too try-hard and unnatural. (And not try-hard in a way that this kid would try—he’s the type who heard an adult say something he doesn’t quite understand, though he knows it’s bad, and would repeat it—but in a contrived way.) 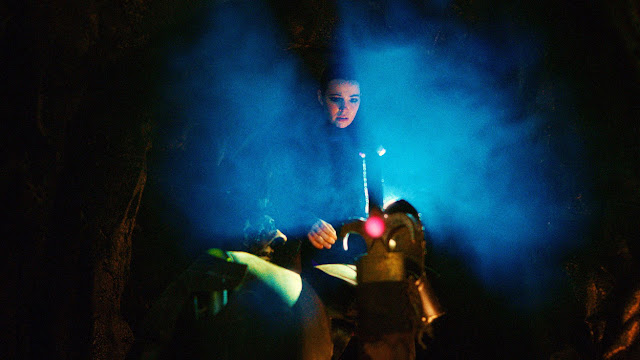 And if you think bullies in Stephen King stories are sadistic purely for the sake of sadism, just wait until you get a load of Billy. This dickhead is so steadfastly dedicated to his craft that when kidnapped by aliens and taken to their ship, instead of trying to escape or fight back or even hide to protect himself, he continues to bully the smaller kids by forcing them to watch the aliens do horrific things to their friends. He’d rather make them suffer than save his own ass. You got to do what you love, I guess, but damn, that’s commitment.

With the aliens themselves, we get a ton of fun, gooey practical effects. This includes multiple varieties of acidic space goo, and subsequent melted faces, which is always a welcome addition to any film. The design of the creatures themselves walks a fine line between the schlockiness of the movies the film tips its cap to and being creepy and scary. (They also fall into the general Grey category aesthetically for any extraterrestrial enthusiasts in the house.) Their craft being underwater gives a bit of a different spin to their whole thing. (Between this and his short, One Last Dive, did something really bad happen to Eisener in the water?) 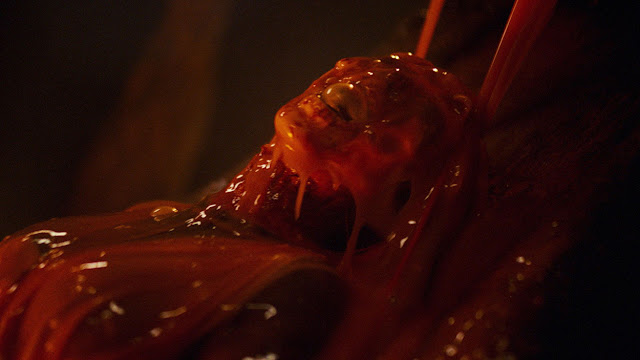 Kids vs. Aliens captures the feel of a bunch of friends making a movie together. Not only in the scenes where the kids make their movie, but as a whole. That’s the sensation you get, that you’re watching a bunch of buddies make a movie. (Reading the press notes only drives this home.) That joy, energy, and enthusiasm shine through, even when it’s messy and threadbare, or when obvious external production limitations raise their heads.

At its best, Kids vs. Aliens is goofy and earnest—think an R-rated kids show or mean-spirited Amblin project. On the other side, it’s also a bit slight and inconsequential; there’s only one real moment that carries much punch. Tonally it vacillates between rousing Goonies-style adventure and a more brutal stance, but the two sides never jibe and are at odds with each other throughout. Overall, however, it’s reasonably fun and a nostalgic love letter to the filmmakers lingering childhood proclivities. [Grade: B-/C+]

Posted by Brent McKnight at 8:49 AM