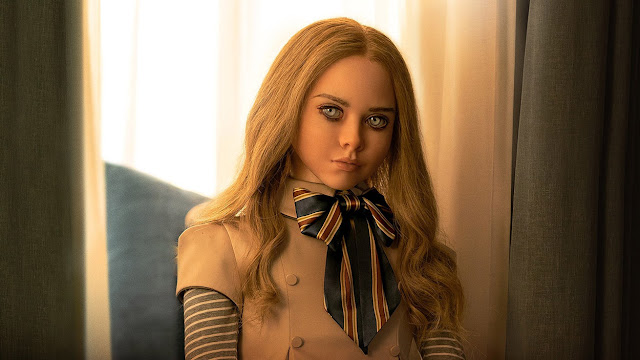 If you look at M3GAN, the new dancing uncanny valley murder doll movie from Blumhouse, writers Akela Cooper and James Wan (the duo behind Malignant), and director Gerard Johnston (Housebound), and think, “Hell yeah,” you’ll probably have a fine time. What’s fun about it is really damn fun, equal parts campy, goofy, and spooky. In these moments, it knows precisely what movie it is, what the audience wants, and how to deliver exactly that. It's everything in between these fun bits, however, where the problems lie.

While there is plenty of the titular creepy plastic-and-wires automaton, there are also long stretches where the film focuses on the story and the characters. Those parts of M3GAN are not only much less interesting and entertaining, they’re also often far too drawn out, tedious, and bland. Overall, the movie leaves the impression of an episode of Black Mirror or a show of that ilk, only stretched to fill 90-plus minutes. 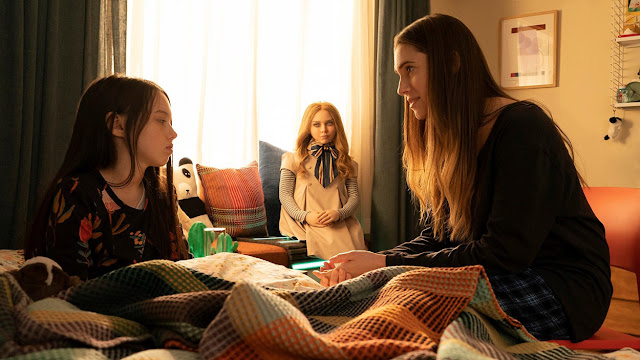 On the way to a ski vacation, young Cady (Violet McGraw, Black Widow) loses both her parents in a tragic car accident. She goes to live with her aunt, Gemma (Allison Williams, Get Out), a brilliant robot builder person who is good with machines but not so much with little girls grieving and coping with trauma. So, obviously, Gemma builds her niece a robot friend, M3GAN (voiced by Jenna Davis and played physically by Amie Donald), who bonds with Cady and becomes her friend, confidant, and de facto therapist. You can imagine how this bond goes violently awry as M3GAN becomes increasingly protective of her new human bestie.

This all sounds interesting. There are themes of grief and unimaginable loss, survivor’s guilt, two mismatched people trying to come together, finding a place to belong and people to belong with, over-reliance on technology, humans playing god with artificial intelligence, among others. Ronny Chieng (Crazy Rich Asians) plays David, Gemma’s bottom-line-driven boss, and for a moment it looks like there’s going to be something about corporate greed and overreach, or even industrial espionage. All these ideas are there, tie into the main narrative, and seem to offer fertile ground to explore, but the film deals with them in the most superficial, toothless, slipshod manner.

[Related Reading: 'Get Out' Movie Review] 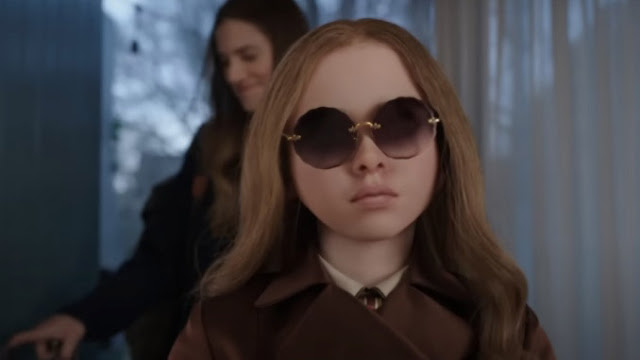 Williams and McGraw are fine, but they honestly don’t have much to do beyond seem vaguely sad in between robot attacks. We get almost nothing in the way of emotional connection or depth between them. The filmmakers certainly know what works best about their movie, their black-faced nightmare doll, but there are long stretches where it pretends to care about the characters, but in the most shallow, predictable way possible. There’s a grouchy neighbor with an out-of-control dog, wonder how that’ll go? A bully at school? Hmm. Even an aside about a guy stealing proprietary secrets resolves in the most uninspired, inconsequential fashion. Basically, anything that isn’t M3GAN on a rampage is dull and plodding and lacks any momentum or urgency. And there’s way, way too much of that. The film eschews these ideas in favor of tepid interpersonal drama and vague work woes.

Johnstone has talked about reshooting and editing to achieve a PG-13 rating, which makes sense—it was probably borderline R to begin with—especially as it’s tracking to have a big opening weekend. Still, there are moments where it’s obvious the filmmakers pulled back on what was originally there, and as a result, there are times when it lacks substantial punch. 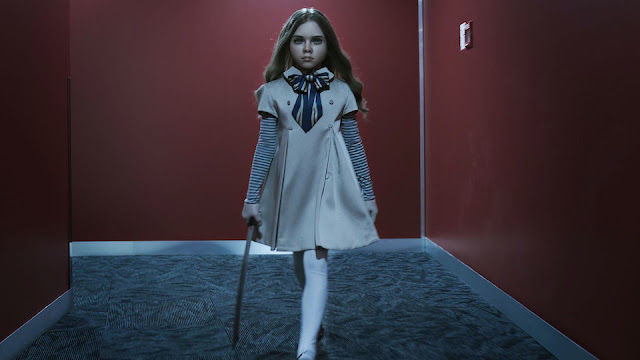 This may sound too harsh and overly critical, after all, we’re talking about a movie where a vengeful doll does cartwheels and boogies as she’s about to kill. When it leans into the absurd concept, M3GAN is often a blast. It’s fun and silly, full of rewatch potential, and already seemingly destined for cult status. See it with a rowdy crowd if you feel comfortable doing that sort of thing these days. It’s ultimately a light, fluffy, enjoyable horror comedy trifle, though one with quite a bit of missed potential and moments where it drags. But if you go in aware that everything that isn’t M3GAN is super blah, you’ll be fine. [Grade: B-]