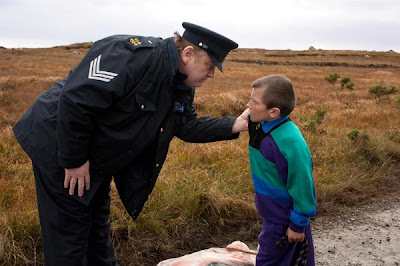 What do you get when you throw together a crotchety Irish cop and a straight shooting, by-the-book FBI agent? You get a damn good time, that’s what. And director John Michael McDonagh’s new film “The Guard” is just that, a blast from start to finish. The movie works as a 70s throwback crime flick, while at the same time taking the piss out of the genre. “The Guard” is raucous and depraved, but also one of the most entertaining, darkly comic detective movies in recent memory.

Brendan Gleeson (from a bunch of “Harry Potter” movies, “In Bruges”, and so many more) plays Gerry Boyle, a small-town Irish cop. Not to sound like a quote whore, but Gleeson is absolutely brilliant in “The Guard”, absolutely spot on, and he carries the movie. Boyle is a schlub who drinks too much and has a penchant for hookers—two at a time—and “The Guard” begins as he disinterestedly watches a car full of drunk kids plow into a wall. He then frisks the corpses, and tosses most of their drug stash, but not before taking a couple tabs of LSD to brighten up his dreary, overcast afternoon. On the surface Boyle is a joke, but his sarcastic tone and gruff exterior camouflage a razor wit and keen, intelligent eye. Everyone underestimates him. Think a foul-mouthed, debauched Columbo and you’ve got a good idea.

When FBI agent Wendell Everett (Don Cheadle) arrives on the scene in hot pursuit of a trio of drug traffickers about to smuggle half-a-billion dollars worth of cocaine into the UK, the two get off on the wrong foot, to say the least, mostly due to Boyle’s racist quips and jabs at the FBI for situations like Waco. Gleeson and Cheadle are a perfect mismatch, and it is one of the joys of “The Guard” to watch Wendell attempt to get a read on Boyle, trying to decide of this guy is a buffoonish corrupt cop, or a wily investigator.

The plot has all of the usual genre elements. There are mysterious murders, uncooperative villagers, blackmail, drugs, bribery, the whole nine yards. But what it also has are melancholic undertones. Boyle’s mother (Fionnula Flanagan), who is just as vulgar as her son, is ravaged by cancer, but distracts everyone from this fact by bantering about Russian literature and joking about orgies. The simple fact of aging, especially while witnessing his mother fade away, makes Boyle a profoundly unhappy man, no matter how much whiskey he drinks, how many prostitutes he beds, and how many irascible, off-color jokes he makes. No matter how much you laugh, and you will laugh your ass off at “The Guard”, you can’t escape the twinge of sadness that cuts through everything, even Boyle discussing the logistical problems of giraffe ownership with the guy holding him hostage. This adds a necessary balance to the film that keeps it from becoming all about Boyle’s uproarious antics.

And I have to say that the villains are awesome. Liam Cunningham (“Dog Soldiers”) is the philosophy-spouting ringleader, and there is an evil glint in his eye that makes him a wonderful bad guy; Mark Strong (“Kick-Ass”) is a British heavy, who wants something more meaningful out of his life, but who is also spoiling for a gun fight; and David Wilmot (“The Tudors”) can’t decide if he is a sociopath or a psychopath, or if there is any real distinction between the two. They form an interesting triangle, and their quick back and forth elevates them above simple, one-dimensional outlaws. Who besides these guys would idly wonder if torture is hobby or a psychological hang-up?

The plot, surprisingly tense even with all of the laughs, builds as it should, towards a violent climax scored with a western-style that fits like a glove. And the whole film concludes with an ambiguous flair that leaves you wondering if Boyle has always been telling the truth, or has been completely full of shit from the word go. Depending on how you read him there are multiple ways to interpret the ending. Boyle may very well be a crotch-grabbing Lone Ranger, out to save the day, but not before he finishes his pint.

“The Guard” is a pleasant surprise, and despite the fact that it is getting a gradual release across the US, I hope that the movie picks up steam over time and gets to play to a wider audience. If only American moviegoers can look past the thick Irish brogues, and lack of an unnecessary love story, they will fine one of my favorite films so far this year.
Posted by Brent McKnight at 11:06 AM