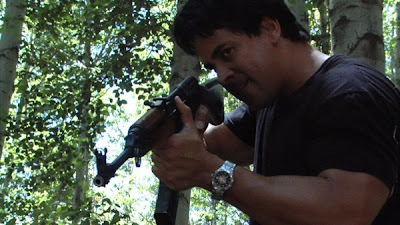 “Target Practice” looks a lot like a movie that some of your more enterprising buddies made—shooting on weekends, using the props and locations available to them, full of questionable acting, and that sort of thing. And if you approach the film from this direction, it’s not bad. The action sequences are surprisingly solid, and the story, while not pulled off particularly well, is interesting enough that it could have been good. So “Target Practice” has these two things potentially working towards its favor, but not much else.

The lo-fi cinematography tries to pull off a verité kind of style, but instead of using the handheld, slice-of-life thing to the film’s benefit, it goes overboard with pans that whip so fast they hurt your neck, and snap zooms that induce a vague nausea. The characters have almost nothing to them, and the story starts out with five types—there is the leader, the loudmouth, the sleepy one, the PC guy, and, most important to “Target Practice”, the raging bigot. The movie wants to be character driven, but when there is no substance to the characters—you don’t even remember their names—and the action is the best thing about your movie, you’re going in the wrong direction. In reality it doesn’t matter who these actors are, they’re just dudes. It may even help to picture the faces of some of your friends superimposed over the performers. That could be fun.

When these five unlikely friends head into the woods for a weekend fishing trip, woods that none of them have ever been to by the way, they get more than they bargained for. They stop to see if the driver of a Jeep abandoned by the side of the isolated dirt road needs help, and immediately an unseen sniper guns two of them down. As it turns out the cadre of weekend warriors has stumbled on an Al Qaeda training camp for homegrown terrorists. The survivors scatter into the wilderness and spend the rest of the movie bleeding, arguing, and trying to survive.

Racist is the closest thing “Target Practice” has to a protagonist. He strikes out on his own for a while before hooking up with a CIA operative who infiltrated the terrorist cell. Most of the background information comes in the form of forced, exposition heavy dialogue as the CIA agent helps Racist evade their pursuers. But is he really helping, or is he up to something sinister? Hmm? You can feel the weight of the hand as “Target Practice” attempts for a moment to have some sort of point as a black man saves Racist. It’s the simplest, most insincere form of combating racism you’ll ever see—like, “wow, I was saved by a black man, maybe all my years of bigotry and racial hatred were wrong?” You get a serous “After School Special” vibe. Luckily there isn’t much time wasted on this message moment, and “Target Practice” gets back to the machine-gunning.

Poorly thought out plot twists mire the movie down as it goes along, and you can’t help but wonder why international extremists would put so much time and effort into tricking a guy who works in a lumber yard. There seems to be little at stake for them. The plot is pointlessly convoluted, and if writer director Richmond Riedel had simply stuck with the skeleton of the plot—some buddies go into the woods and discover a terrorist training camp—and some nice shootouts, “Target Practice” could have been a fun, no-budget action film. Instead there is too much time spent on pointless dialogue and awkward flashbacks that are empty attempts to give these people personalities, attempts that ring hollow. I would have rather seen the character of these men come out in moments of extreme duress, like being hunted through the woods by terrorists. Showing each of them kiss their wives on the cheek tells you nothing about them.

All in all “Target Practice” is a good idea with some action sequences that should be used as an illustration to Hollywood that you can make this sort of movie without breaking the bank on computer generated effects of entire cities being decimated. Unfortunately the story meanders for too long, the performances are, well, bad, and the end result winds up tedious and not that interesting to watch.

The DVD comes with a bunch of extra material. There is a blooper reel with the usual gags, flubbed lines, actors tripping, and chasing off a rattlesnake with a stick (!?). Of course a movie that is already far too long has a bunch of deleted scenes, like some more flashbacks that don’t add anything, but these come with optional director commentary. Riedel also has a feature-length commentary track, and 53 minutes worth of cast and crew interviews are mostly spent with the actors discussing their characters. Each performer has developed an intricate back-story and fully formed personality for their role, things that are nowhere to be seen on screen. They talk about the rich inner lives of their characters, but where the hell did it go? There’s not even a glimmer of that in the actual film.
Posted by Brent McKnight at 3:15 PM