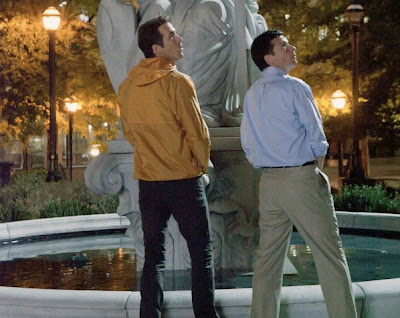 It’s about damn time. All my life I’ve watched movies like “Freaky Friday”, “Freaky Friday” remakes, and “Freaky Friday” knock-offs, screaming, “When? When, God, will bros finally get their turn?” And I am pleased to finally be able to say that today, August 5th , 2011 (unless you’re reading this later), the bros finally get their due, thanks to director David Dobkins’s (“Wedding Crasher”) new body-swap comedy “The Change-Up”. Because of Dobkins, and writers Jon Lucas and Scott Moore (“The Hangover”), no longer will we have to wonder what it would be like if two dudes, two dudes with polar opposite personalities and lives, switched places with each other for a short time. No longer will we have to theorize how this scenario would play out, we have concrete cinematic proof of the wackiness that will ensue.

While “The Change-Up” isn’t as awful as you may have feared—actually, it isn’t awful at all—it isn’t anything super noteworthy. In a summer of movies like “Bad Teacher” and “Horrible Bosses”, movies marketed as raunchy comedies while barely earning an R rating, “The Change-Up” is the most deserving of this designation (I’m excluding “The Hangover II” from this discussion). Within two minutes you see a baby cover a man with gross, gooey baby-poo. Right there you know what kind of movie going experience you’re in for. Hell, it almost got slapped with an NC-17 rating.

I have a question for the married folks in the audience. I’m not married, and have no plans to be, ever, but even I am a little uncomfortable with Hollywood’s continual portrayal of marriage as a tedious, sexless stasis where you’re just killing time, waiting to die, and the only joys you can hope for are a few stolen moments alone in a bathroom so you can rub one out thinking about a hot coworker. Is that really how it is? If so, why do people get married? And if not, does it bother those of you who have built most of your existence and identity around this sacred institution? I’m not going to lie, myself, I find it a little strange, hence the curiosity.

Either way, that idea, that marriage equals slow suicide, is at the core of “The Change-Up”. Lifelong buddies Mitch Planko (Ryan Reynolds) and David Lockwood (Jason Bateman) couldn’t be more different. Mitch is an actor, mostly appearing in soft-core, Skinemax-style fare. He’s a quitter who has never finished anything in his life, nor has he ever risen to any challenge he has ever faced. When life puts a roadblock in front of him, Mitch goes home, gets high, and sleeps with any number kinky, attractive women. David, on the other hand, is a straight-laced lawyer. He has a beautiful wife, Jamie (Lesley Mann), a young daughter, and a pair of newborn twins. His life is an intricate web of responsibilities, from his duties at work—where he lusts after his colleague Sabrina (Olivia Wilde)—to daycare and ballet lessons, to “dialogue night” with Jamie.

When the two friends squeeze in a single night to hang out, do shots, and watch a baseball game at a bar, each confides that they secretly envy the other. On their way home Mitch and Dave pause to relieve their overburdened bladders in a public fountain. While pissing they simultaneously blurt out, “I wish I had your life”. Low and behold, when they wake up the next morning they’ve switched bodies. Mitch’s horny adolescent brain now lives in Dave’s body, and vice versa. And that’s it, that’s all the explanation there is. They pee in a magic fountain, and trade bodies. The script doesn’t waste any more time than that. If it were to pause too long you might start thinking about the situation, which would be bad, and “The Change-Up” wants to avoid thoughts of things like logic. So Dobkins and crew simply skip right along past that and show you some boobs and rattle off a few poop jokes instead. And I’m okay with that.

You can imagine where the story goes after the trade—Mitch has a big audition, Dave has a make-or-break presentation at work, and god dammit, someone moved the magic fountain before they can pee in it again. The plot is brutally predictable, but the first two-thirds of “The Change-Up” is actually pretty funny. You know the story is stupid and ridiculous, as do the filmmakers, so they cram the film full of bits and gags that, while they don’t advance the plot much, will make you laugh. Towards the end, however, “The Change-Up” devolves into a sappy, melodramatic morality play about how the characters really had great lives all along but just needed a little help to see how good things actually were. Everything ends so happy you’ll just want to clap your little hands like a jabbering idiot child. It’s bullshit. I would have warned you that I was about to spoil the ending, but if you’ve ever seen a movie, you knew exactly what was coming. Hell, even if “The Change-Up” is the first movie you’ve ever watched, it wouldn’t be difficult to figure things out.

“The Change-Up” isn’t terrible, but it isn’t something you need to see in the theater. Reynolds and Bateman are a lot of fun to watch, and they have a great chemistry. Mann is funny as always, and Wilde is, well, Wilde is nice to look at—her character isn’t expected to be anything more than a pretty face. The movie is entertaining enough that you’ll enjoy it, but it’s ultimately empty and doesn’t have a lot of staying power. You’re not going to spend the next two months quoting “The Change-Up” with your little buddies.
Posted by Brent McKnight at 11:02 AM

What a load of rubbish and a huge dissapointment. Turned it off half way through due to the crudeness and choice of language. What a waste of money.