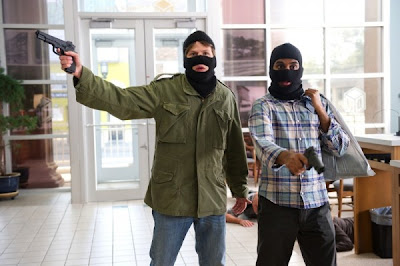 “30 Minutes or Less” is a breath of fresh air in what has overall been a stale summer. Director Ruben Fleischer’s follow-up to “Zombieland” is one of the few comedies this season that isn’t trying to be an edgy, raunchy, gross-out fest; and it doesn’t end with some heavy-handed, overly-simplified moralizing that even an idiot boy-child can see through. “30 Minutes or Less” is fun, funny, but also manages to tell a good, surprisingly tense story with solid characters. Who would’ve thought to do that?

Jesse Eisenberg is Nick, a twenty-something slacker who spends his days getting high and speeding around in his beater car delivering pizzas. His roommate, Chet (Aziz Ansari), has just been promoted from substitute to full-time teacher. Moving on with his life and becoming a responsible adult, Chet doesn’t have time to squander on beer binges and “Lethal Weapon” marathons. Just to get some things straight, in my world, neither of those things is a waste of time. In fact, that sounds like an ideal way to spend an evening. Just wanted to clear the air. Nick and Chet have an obligatory falling out due to the different directions their lives are heading. Chet is moving on, while Nick seems destined to remain in the same miserable rut.

Dwayne (Danny McBride) is essentially a more mean spirited version Nick a few years down the road. All Dwayne and his homeboy, Travis (Nick Swardson), want to do is watch “Friday the 13th” movies and blow shit up in their abandoned junkyard hangout. That also sounds like a pretty good time. Dwayne lives with his lottery-winner, ex-Marine father (Fred Ward), who gives his son non-stop grief about getting a job and being a loser. Dwayne has goals, however. His dream in life, his grand moneymaking scheme, is to open a tanning salon that serves as a front for a brothel. He’s even worked out code words for various sex acts. Dwayne and Travis, along with a helpful gold digging stripper, hire a hitman to take out Fred Ward before he squanders all of Dwayne’s inheritance. The only problem is that they need $100,000 to pay this elite assassin, the mumbling, meely-mouthed Chango (Michael Peña).

They don’t want to rob a bank themselves, that’s not thinking like millionaire executives at all, so what they do is order a pizza from Nick’s shop, strap a bomb to his chest, and force him to pull off the heist for them. With nowhere else to go, no one else to turn to, and with high explosives attached to his chest, Nick goes to Chet, enlisting his only friend to help him round up a hundred g’s, and save his life in the process. Using “Point Break” as a how-to-guide for bank robbery, the two friends set out on a break-neck, live-or-die adventure.

Eisenberg does a good turn in “30 Minutes or Less”. Not only is he solid as the lazy slacker floating easily through life, he’s also relatable as a scared kid with a ticking timebomb tied to him. Ansari does his usual thing as the sidekick, cracking wise and hollering as the beleaguered, harassed Chet. It still impresses me that I don’t completely hate Danny McBride yet, especially considering that he is exactly the same in every single role. He’s Kenny Powers from “Eastbound and Down”, always. My working theory is that his crude outbursts are funny in small doses, but, despite his popularity, he hasn’t attempted to carry an entire feature length motion picture. That would be too much. In my opinion that’s where Jack Black went wrong. He’s funny in bit parts, in supporting roles, but if you have to sit down and watch him for 90 minutes, he’ll make you want to murder someone.

Every time I’ve ever watched Swardson on screen I’ve hated him, but in “30 Minutes or Less” I find him rather innocuous. He’s just there, chiming in from time to time, giving McBride someone to hurl insults and obscenities at. Peña, however, steals every scene, playing Chango with a lisping, thuggish aplomb. Fast-talking and soft-spoken, he’s somehow understated, menacing, and hilarious all at the same time. He usually plays serious roles, but despite the fact that he’s a killer for hire, Chango’s stream of consciousness rambling is the highlight of “30 Minutes or Less”.

Given the fact that “30 Minutes or Less” is only 82 minutes long, the story is, by necessity, compact. There isn’t room for downtime or any extraneous threads. There is a bit of a love story between Nick and Kate (Dilshad Vadsaria), Chet’s twin sister, but that is relatively minor in the grand scheme of things, and is more an illustration of Nick’s personality than anything else. He’s been in love with Kate for years, but has always been too afraid to tell her. Part of his arc as a character is how he deals with his feelings, with the fact that he actually has feelings. Even with this aside the script is tightly written and strikes the delicate balance between story, character, action, and humor, with a deft touch that you don’t notice at first. And even bouncing back and forth between multiple characters and storylines, no movement is wasted.

“30 Minutes or Less” is a quick, compact comedy that never takes itself too seriously, even though life and death constantly hang in the balance. There are ruthless contract killers, bank robberies, car chases, and explosions, and the film is just solemn enough to make you care enough about the protagonist, and that all of these elements serve to increase the tension while still making you laugh with wild hysterics. In that way it works in a similar manner to “Zombieland”. You connect with the characters, and the fact that they’re always on the brink of annihilation engages you on a deeper level than if they were just running around on a series of wacky misadventures. And there’s a flamethrower. Fleischer and company get extra points for that; ever a bad idea.
Posted by Brent McKnight at 5:49 PM