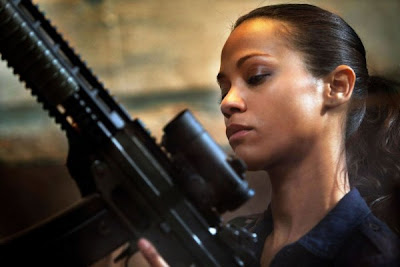 After witnessing the brutal murder of her parents at the hands of Colombian drug lords, Cataleya (Zoe Saldana) grows up to become a ruthless assassin bent on revenge. That’s the plot of “Colombiana” in a nutshell, and to be honest, there isn’t much more substance than that to the story. At the core the story is like “Leon” light, essentially an empty version of the same plot carried further. Lucky for you there is some solid ass kicking action to back up what the script by Luc Besson and Robert Mark Kamen lacks.

“Colombiana” is strongest in the opening. Young Cataleya (Amandla Stenberg), instead of being the fragile, broken child who just saw her parents butchered, is a badass. She stabs Marco (Jordi Mollá, “Bad Boys II”), an evil henchman, in the hand then leads a gang of heavily armed cartel enforcers on an epic foot through the slums of Bogotá. Who knew eight year old girls were so adept at parkour? All on her own she finds her way to Chicago, where her uncle, Emilio (Cliff Curtis), is a medium level crime figure. Cataleya is as strong as she needs to be, but also still a child, and with the single-minded focus that only a child has, declares that she is going to become a killer, with or without Emilio’s help. Resourceful and determined, you never doubt for a second that she’ll succeed in her quest.

Fast forward fifteen years and Cataleya has become just what she set out to become, a highly skilled killer with vengeance on her mind. After a couple of nice scenes of her professional prowess, which take every opportunity to strip Saldana down to the most minimal amount of clothing possible—however, even when fully clothed you can pretty much always see her nipples, seriously, Saldana’s nipples should get their own credit—the pace begins to sag. In fact, the middle of the movie is largely forgettable, laughable at points, and is over serious to the point of absurdity.

There are a bunch of unnecessary asides, including tangents about an FBI agent (Lennie James) hot on Cataleya’s trail, a vaguely corrupt and generic CIA agent (Callum Blue), and far too many scenes of her making out with her hot painter hump buddy (Michael Vartan, “Alias”). In reality, everything that doesn’t directly revolve around action is probably best ignored. But things always look darkest just before the dawn, right? And I’ll say it one more time, lucky for you, right as you’re about to give up hope, “Colombiana” gets rad again. And we’re talking rocket launchers, hand grenades, and a towel-fight rad.

There isn’t much to think about too seriously in “Colombiana”. It’s a simplistic look at culture and trauma, and a story full of caricatures and stereotypes. At it’s best, however, the film is entertaining eye candy, and that’s enough for me tonight. There are shark fights, intricate assassinations, lots of things to blow up, and an assortment of interchangeable goons with no larger purpose in life than to become cannon fodder for a hot killer in a bodysuit. Sure it’s cheesy and melodramatic, but what the hell, it’s also a good time.

I can’t help but think that without Soldana’s presence, “Colombiana” would never grace the multiplexes. This is a kind of action movie that rarely gets a wide theatrical release anymore, unless it happens to be directed by Sylvester Stallone and star a bunch of 80s action icons. Usually films of this nature are relegated to the direct-to-video market and enjoyed only by the hardcore among us who actively seek out genre features. This is the kind of action I grew up on. It’s a little bit sexy, a little bit silly, and to be sure there are some moments of blustery over acting and poorly executed American accents, but all in all, “Colombiana” isn’t bad.

I think it is also worth noting that a man with the surname “Megaton” is responsible for directing “Colombiana”. It takes a certain level of balls to change your name from Olivier Fontana to Olivier Megaton. How do you explain that one to your parents? But that’s exactly the type of personality—one full of cockiness and bravado—that I want in charge of my action movies. Well played, Megaton, well played.
Posted by Brent McKnight at 3:04 PM