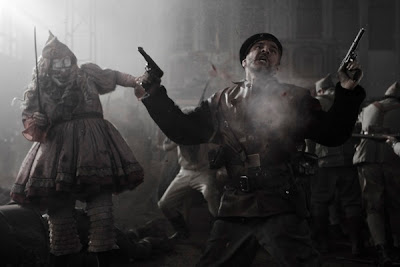 Okay boys and girls, it’s time to put on our bat-shit-crazy-pants and get a little bit nuts. And by a little bit nuts, I mean a lot bit nuts. This is really the only way to prepare you for the onslaught of Spanish director Alex de la Iglesia’s (“Accion Mutante”, “800 Bullets”) latest film, “The Last Circus” (“Balada triste de Trompeta”). It is one of the most bizarre and wonderful movies I’ve seen in a long, long time. Any movie that starts with a clown wielding a machete is on the right track. Circus performers conscripted against their will to fight a war they neither believe in, nor have any interest in participating in. How can you go wrong?

That’s a horrifying image, right? A face covered in thick pancake makeup wielding a long blade. Even to those of us who aren’t normally afraid of clowns. I’m not frightened of the paint-faced circus denizens, per se, though I do think they’re eerie, and I generally assume that for every clown you see there is a corresponding basement full of skulls somewhere in the world.

Raise you hand if you’re up for a surrealist riff on the Spanish Civil War, love, fascism, and revenge, all set against a circus backdrop? Because that’s exactly what you get from “The Last Circus”. What begins as a violent war movie (think the first scene in “Saving Private Ryan” and that will give you a good idea of the intensity of the violence), quickly morphs into a warped black comedy, and then transitions smoothly into so many other types of madness that include elements of horror and romance, just to name a few.

Third generation sad clown, Javier (Carlos Areces)—descendent of the aforementioned machete wielding “happy” clown—falls for Natalia (Carolina Bang), the flirtatious, seductive acrobat, who has an abusive alcoholic boyfriend, Sergio (Antonio de la Torre), which she kind of digs in a wildly sexual way. Javier is too sad to follow in his father’s more cheerful footsteps. Constantly humiliated by Sergio, Javier is drawn into a sordid three-way relationship, and a ferocious battle for Natalia’s affection and attention ensues. Things spiral rapidly downward into chaos, until at one point Javier lives in a cave, naked, surviving off the corpses of suicidal forest creatures. Then it gets weird, including a bit where Javier, being treated as a dog—literally as a dog, he has to walk on all fours and retrieve downed birds—bites Franco.

“The Last Circus” comes across like an ultra-violent “City of Lost Children”. Full of peculiar, striking images from start to finish, the film is beautiful, strange, brutal, and creepy, all at the same time, and is truly a sight to behold. The colors, lights, and sights of the circus give the film a twisted, sinister edge that fully explodes as the movie progresses, like when Javier burns himself with an iron in preparation for a kill crazy rampage. Just imagine a deformed clown dressed like a priest wielding shotguns as he goes out of his mind, like a psychedelic Rambo. That alone makes “The Last Circus” worth watching. I guess if they don’t laugh, scaring them shitless is the way to go.

I first saw “The Last Circus” at the Seattle International Film Festival back in June, and out of all the movies I managed to cram into an overfull schedule, “The Last Circus” is the only one I enjoyed as much was “Troll Hunter”. “The Last Circus” bursts with memorable imagery, like an elephant carrying a dead body, and a “Kojak” themed nightclub decorated with oversized pictures of a grinning Telly Savalas. It is a tragic love story, a sharp political satire, out-of-control nuts, and, in the end, both devastatingly beautiful and disturbingly grotesque.

Magnet is releasing “The Last Circus” in theaters beginning this weekend. Sure it is limited, but hopefully it will open wider soon, and if it does you better get your ass to whatever dingy little art house theater that happens to play host to this one, it’s a gem.
Posted by Brent McKnight at 4:17 PM