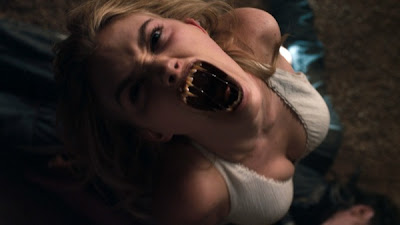 I’m going to try not to waste a bunch of time with a pointless how-dare-they-remake-a-classic-like-“Fright Night” rants. We all know that well trod territory is completely pointless, and they’re going to keep coming, like it or not. Besides, I’ve seen the original—though it’s been at least 15 years, probably more—and while I remember enjoying it, I also remember that it wasn’t any sort of masterpiece to begin with. Sorry to all of you hardcore fans out there, you can send me hate mail if you want. I’m here to say that “Fright Night 3D”—director Craig Gillespie’s remake of the horror comedy—isn’t all bad, but it is mostly bad.

There are a few bright spots, but overall I can’t get away from the word unnecessary when thinking about the film. “Fright Night” is unnecessarily long, by at least 15 to 20 minutes. That much ballyhooed third dimension is unnecessary, with one sunlight-exploding-a-vampire exception. There are a handful of unnecessary scenes that waste time and are full of plot contrivances. And in the grand scheme of things the movie never seems necessary.

“Fright Night” starts out promisingly enough, and for a while you think you’re on your way to a decently entertaining, tongue-in-cheek horror movie. Everything is going right for Charlie Brewster (Anton Yelchin). His skin cleared up, he put his geeky past behind him, and now he’s dating the sexy girl of his dreams, Amy (Imogen Poots), who actually likes him despite being way out of his league. Sure he lives in a pre-fab housing development in a Las Vegas suburb where all the homes are cut from the same pattern, but what the hell, things could be worse, things aren’t so bad. Oh, not so fast there, buddy.

You know what could really put a crimp in old Charlie’s day, metaphorically speaking of course? A vampire moving in next door. Jerry (Colin Farrell) is the mysterious neighbor who only seems to come out at night. Weird. Charlie’s nerdy ex-BFF, Ed (Christopher Mintz-Plasse)—a link to a past Charlie is trying to distance himself from—convinces Charlie that Jerry is a nightwalker, and you know what, turns out he’s right.

Everything that follows this revelation—which isn’t much of a revelation since the first scene in the movie is a vampire eating an entire family—is a series of attempts by Charlie to gather intel on Jerry, protect his mom (Toni Collette, I would say slumming it here, but what the hell else has she been up to?) and Amy, and ultimately rid their quiet cul-de-sac of the influx of unwanted blood-suckers. Read that way, “Fright Night” has a disturbing pro-segregation undercurrent—the white, mostly blond neighborhood tries to keep out the newcomers because they’re different, because they dwell in darkness. Okay, that was a joke, I’m not digging that deep into “Fright Night”, and it probably isn’t funny. But I’ve been awake for a very long time, so everything seems funny to me.


Yelchin walks a fine line between being that new-school horror movie teen—self-aware and with a wealth of knowledge gleaned from a lifetime of popular culture—and becoming too coy, too aware of the situation. For the most part he pulls it off and is enjoyable to watch, and is by far the best thing going here. Where “Fright Night” takes a wrong turn, however, is with Farrell. He spends his time onscreen strutting and posing and biting apples sexily. His black contacts are super cheesy, and though he has one funny moment later in the film where he hisses at a beam of light, he’s tedious and drags the movie down. Yelchin seems to actually be having fun with his part, while Farrell feels like he’s “trying to have fun with his part”.

David Tennant shows up as a Chris Angel type TV magician who also apparently doubles as a vampire expert. Why a magician, you may ask? Your guess is as good as mine. Tennant also has a few bright shinning moments, but most of his role is channeling Russell Brand. Though he does become slightly more tolerable as “Fright Night” progresses, his presence is largely unnecessary. There’s that word again.

“Fright Night” can’t decide if it wants to be a fun, light-hearted horror romp, or a serious scare fest. It works best as the former, and fails miserably as the latter. Every attempt at drama is laughable, especially since there is no actual conflict outside of the vampire. Charlie doesn’t have any real problems—he likes his mom, his love life is solid, he’s on the verge of popularity—his suburban existence is pretty benign. None of the frights deliver at all, and the vampire special effects are god fucking awful. Seriously, they’re garbage. And they come out of nowhere. Jerry gets all vampirey and sucks a bunch of people dry a couple of times, but the only effect is that his teeth grow—which is reasonable, he is a vampire after all—but then halfway through the movie, boom, his face is all distorted and monstrous, with a mouth full of jagged CGI teeth.

There are a few chuckles in “Fright Night”, but poor pacing and lack of any discernable direction weighs it down. Large portions of the middle could be hacked out with little impact on the overall story—I’d say arc, but there is no real arc in either the story or characters. “Fright Night” is too schizophrenic to succeed, as a remake or a stand-alone film. It is up then down, fast then slow, funny then serious, never striking these, or any other notes convincingly. I’m not one to call the original “Fright Night” a great cinematic achievement, but, as you can probably guess from everything I’ve tried to say, “Fright Night 3D” is an entirely unnecessary remake.
Posted by Brent McKnight at 4:19 PM