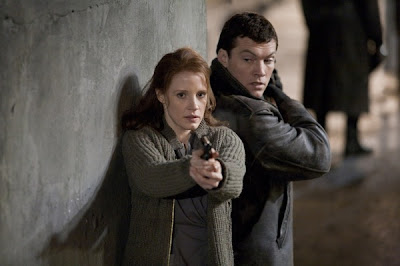 “The Debt” had me for two-thirds of the movie—maybe it was even three-quarters, I wasn’t wearing a watch. John Madden’s (director of “Shakespeare In Love” John Madden, not the senile, football-spouting loudmouth with the same name) crafts a tense thriller about Israeli Nazi hunters that grips you and has you on the edge of your seat and all of that other stuff that a thriller is supposed to do. Even in moments of down time you’re still engrossed, leaning slightly forward, hanging on every frame. The film is expertly paced, flawlessly acted, and has a unique, intricate structure that is executed with pinpoint accuracy.

And then it lost me. “The Debt” never goes horribly wrong, exploding in a dazzling ball of flame, it simply dies in a mediocre fizzle. Which is even more disappointing because it was so good for so long, the anticlimactic final twenty or thirty minutes becomes an epic letdown.

Scripted by Matthew Vaughn and Jane Goldman, the team behind “Kick-Ass” and “X-Men: First Class”, “The Debt” is based on Israeli film “Ha-Hov”. The story kicks off in 1997 at a book release party, a book that celebrates an incident in 1966 when three young Mossad agents killed Dieter Vogel (Jesper Christensen), a notorious Nazi war criminal nicknamed “The Surgeon of Birkenau” for his experiments on prisoners in his concentration camp. Rachel Singer (Helen Mirren) and Stephen Gold (Tom Wilkinson) were two of the agents, and also the parents of the author, and have lived in the limelight afforded them by their heroics.

Even in the opening scenes you skip around in time. There are glimpses of the third member of the party, David Peretz (Cirian Hinds), who commits suicide in a sudden, brutal fashion, on the way to the party. Gradually the film flashes further and further back. First to an earlier version of the agents—Jessica Chastain as Rachel, Marton Csokas as Stephen, and Sam Worthington as David—arriving home in Israel; then another step back to the final moments of the Vogel, as Rachel shoots him during a desperate escape attempt. Finally, the plot leaps back once again, to the beginning of their mission, which comprises the bulk of the story. From this structure—which sounds complex and could have easily become convoluted, though in Madden’s hands it flows smoothly—you expect the story to unfold in a certain way. But even though you think you know what is going to happen, after all you saw how it ends, “The Debt” still manages to surprise.

You follow the story through the mission, back to 1997—with new information that colors your perception—and then beyond, into what happens after the book release. This is where “The Debt” comes off the rails. You feel like the movie ends, only to continue for another half hour. It is a jarring transition, moving away from characters that you’re attached to, that feels rough and tacked on. Not that the internal conclusion I referred to would be entirely satisfying, but the tail end never feels right and “The Debt” becomes little more than a bland, middle of the road spy story, albeit one with Helen Mirren kicking a whole lot of ass.

This is too bad, because up until then thing were going along swimmingly, and you get to watch an incredible cast do wonderful, top-notch work. During the mission a tense love-triangle forms between Rachel, on her first assignment; the shy, quiet David; and Stephen, the outgoing charmer and leader of their cell. Chastain is delicate, fragile, and naïve, but also a complete badass when the situation demands it, and the main body of the story is built on similar juxtapositions. Vogel, this insidious figure of death, has become a fertility specialist. David is torn between his feelings for Rachel and his duty to country and family. Quiet tension and psychological drama butt up against moments of frantic action, and it is wholly engrossing to watch these characters inch closer and closer to their respective breaking points.

“The Debt” is still quite good, and definitely worth watching, especially for the breathtaking performances and story in the main body of the story. However, you should prepare yourself for a letdown as the film never lives up to it’s initial potential; it was shaping up to be one of the best movies of the year. I haven’t seen the original, “Ha-Hov”, so I don’t know how they handle the end, but something about it feels distinctly Hollywood in the sense that there can’t be any loose ends or unanswered questions at the end of a movie. It’s like everything has to be spelled out clearly in black and white, with no room for interpretation. I have to believe that there was a better way to approach the conclusion.
Posted by Brent McKnight at 3:44 PM

Excellent review as I have just seen this movie and agree whole heartedly that the end is ...disjointed.