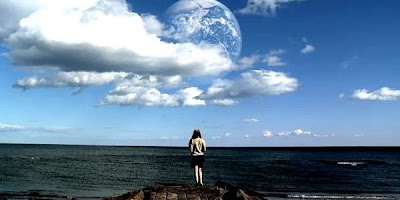 “Another Earth” starts off with an interesting enough, if completely ridiculous premise. Scientists have found a heretofore-unnoticed planet, an exact replica of Earth to be exact, hiding behind the moon, and the movie attempts to explore the impact this discovery has on the people of “Earth One”. What it actually does is meander around for a while, trying to be moody, but succeeding only at boring the ever loving crap out of you. At times it is painfully indie, full of long, static shots of characters walking from one side of the frame to the other. Once in a while that device is okay to use, but it comprises roughly half of “Another Earth”. You just want something interesting to happen, but it never does.

For Rhoda Williams (Brit Marling, who co-wrote the script with director Mike Cahill), a brilliant, about-to-be-an-MIT-astronomy-student, this discovery means going out with her friends, getting wasted, and driving her car. For John Burroughs (William Mapother), a Yale music professor and burgeoning composer in his own right, this means taking his wife and young son out for a moonlit drive to gawk at their new neighbor, which is suddenly very prominent in the night sky. It doesn’t take a rocket scientist to imagine how these two collide, quite literally. Rhoda drunkenly rams into John’s Jeep, killing his wife and son.

Rhoda goes to jail, but because she’s a minor John never knows the identity of the person responsible for the death of his family. When Rhoda gets out she gets a janitor job at a local high school, and after spying John at the crash site on the anniversary of the accident, she starts stalking him. She pretends to be from a maid service and gives him a ‘free trial’. Once he was successful and lead and idyllic life, with his perfect family and career, but now John lives in squalor, surrounded by filth, drinking all day, and never writing music. Occasionally he plays a saw, or tinkles around on a Casio keyboard, but that’s about it. Through some forced interaction, like playing Wii boxing and eating Chinese take out, Rhoda and John form an awkward bond and begin a romantic relationship that never feels natural or even real.

“Another Earth” pretends to ask big questions, like how do you forgive something that’s unforgivable? What would you say if you met yourself? And, after the discovery of mirror selves on Earth Two, has the other you made the same mistakes in life that you have? Basically, John wants to know if his family is still alive in this other world, and Rhoda wants to know if she killed them or not. The story follows predictable lines, like as soon as Rhoda enters an essay contest to win a trip to Earth Two (and no, I’m not kidding, there really is an essay contest), you know exactly how the plot will unfold.

The science fiction elements in “Another Earth” are generally ignored in favor of navel gazing, and you can’t chase away the feeling that you’re watching a student film that needed some padding. When you see the digitally inserted Earth Two looming in the sky, it is a heavy-handed move that feels a little like emotional blackmail, but it doesn’t have the impact that the filmmakers seem to think it does. If you cut out all of the space stuff, all of the sci-fi, “Another Earth” would play almost exactly the same. It would still be boring and sullen, the main relationship would still be artificial and unconvincing, and the whole thing would still feel like it was written by people who have only experienced pain and tragedy on television. There are also glaring problems with the science of the movie that are difficult to get around. The presence of another planet that close to Earth, well, let’s just say that would cause some fairly large problems.

“Another Earth” could have been something really special, but instead you’ll wish you wore a watch to the theater so you can see how much longer this thing is going to drag on for. Apparently the film has won some awards, including one at Sundance, which is mind-boggling because I got nothing from it. You get it, it’s trying to be character driven, not genre driven, but it takes what is an interesting premise, and fails it on nearly every front.
Posted by Brent McKnight at 3:47 PM