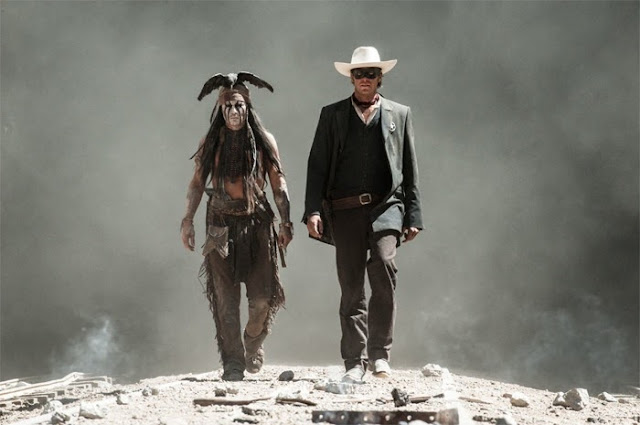 “The Lone Ranger” is a big, fat waste of time. Disney’s latest attempt to cash in on nostalgic moviegoers isn’t even memorably bad. If it failed in a spectacular ball of fire and disaster, at least that would be something. Instead, what you get is 149 minutes—and you feel each and every one of those minutes scrape by—of tedious boredom. The story is convoluted, and by turns attempts to be a tent pole action film, a buddy comedy, a family melodrama, a revisionist western, and a tale of heroism, and it falls flat in every instance. I saw this less than a week ago, and I’m honestly having trouble recalling any specific details without referring to my notes. Except one, I was bored as hell.

If “The Lone Ranger” isn’t the biggest flop of the year, I will be very, very surprised. There’s a serious “John Carter” vibe in play here. First off, it cost an absurd amount of money. Director Gore Verbinski tries to make his film sweeping and epic, but he never captures the majesty of the scenery in the way classic westerns do. This isn’t a John Ford movie, and it’s painfully obvious what scenes were filmed on location, and which were filmed in front of a green screen. It’s hard to imagine the studio putting an untested young actor front and center in a movie this size, but they did, and star Armie Hammer looks lost most of the time, like he’s not sure what the hell he’s doing. In reality Johnny Depp, Tonto to Hammer’s Lone Ranger, gets just as much screen time as the headliner, but to no avail.

Depp and Verbinski aim to capture some of the “Pirates ofthe Caribbean” magic, though they haven’t made a decent one of those since the first outing. Here they even recycle the bit where a character swings around from a tall post and kicks bad guys. Only this time you’re on a train, and the result doesn’t have even a fraction of the swashbuckling excitement. The stunt is just something you’ve seen before. “The Lone Ranger” never comes close to duplicating the adventure or humor of the first “Pirates” movie, and comes across as a stale, wanna-be knock off.

For a movie based on a television show about a gunslinging hero, Hammer’s Lone Ranger is neither heroic, nor adept at handling a firearm. In fact, before he becomes his mask-wearing alter ego, lawyer John Reid espouses a hatred of firearms, saying there’s no need for them where he’s going, the future. Of course, by the end of the film, he has transitioned from a passive man of words to a badass man of action. Okay, not so much on the badass front, but circumstance forces him through the a similar transition to James Stewart’s character in “The Man Who Shot Liberty Valance.” But again, this ain’t John Ford, not even John Ford light.

John is from a frontier town, though he went back east to law school. The typical western contempt and distrust of book learning is on full display when he returns home to instill his big city law and order on the violent landscape of the Wild Wild West. He’s earnest and opinionated, and has zero idea about the way the real world works. His brother Dan (James Badge Dale), a tough as nails Texas Ranger, embodies the other end of the spectrum. When notorious outlaw, and part time cannibal, Butch Cavendish (an uglied up William Fitchner) ambushes them, Dan is killed, and John is left for dead. With the aid of the ever so helpful, and ever so off his rocker, noble savage Tonto, he becomes what is supposed to pass for the hero of this film. In reality, he’s so inept that it is a miracle he’s not killed a dozen times over. Chalk that up to being a “spirit walker,” who can’t be killed in battle.

The rest of the two-and-a-half hour run time is taken up with a logjam of unnecessary complications. For instance, there’s an awkward love story between John and Rebecca (Ruth Wilson), his dead brother’s wife, and the mother of his dead brother’s son. That seems healthy. Because this is a western, there’s Cole (Tom Wilkinson), a creepy, obviously evil railroad baron with a devious scheme. And then there’s Tonto. Though it only ties into the main narrative at the last moment, his story is actually the most interesting one, though that isn’t saying much. An outcast from a dying tribe, he’s nearing the end of a lifelong quest for redemption and revenge. You’d give way more of a crap about him and his story if he didn’t spend half of the movie feeding the dead crow he wears on his head.

As if all of this wasn’t jumbled enough, the whole shebang is wrapped in one of the clumsiest, most intrusive frame stories you’ll come across. Decades after the fact, presumably after the Lone Ranger and Tonto became famous vigilante crime fighters, a small child dressed as the masked man encounters a kindly old Native American fellow. This relic from a bygone era is none other than Tonto himself (Depp in a rubber suit that makes it look like his body is melting). If this device was used to bookend the story, you could ignore it, but “The Lone Ranger” bounces back to it with alarming frequency, completely derailing what little momentum the film had managed to build. You get the point, they’re trying to illustrate the cost of progress, which is an underdeveloped theme throughout the entire movie, but these scenes primarily serve as a platform for Depp to be wacky.

As is the case with most problematic movies, you could forgive many of the faults in “The Lone Ranger” if only it were exciting. But it’s not. Outside of a big contrived, Rube Goldberg style action piece early on, the only major action scene is the climax. Granted, this is reminiscent of the mine cart scene in “Temple of Doom,” scaled up to full sized trains, but by the time you get there, it’s too little too late. You don’t have a hero to hang your hat on. The good guy is bumbling and incompetent, the story is dull and laden with redundancies, and the character you like the most, Dan, dies in the first act.

You could make the argument that this is a film aimed at younger viewers, much like the boy in the Lone Ranger costume. Only the sheer number of bullets fired, extras crushed to death by locomotives, and spunky prostitutes, is enough to disqualify this as a kid’s film. And oh yeah, there’s the cannibalism. At least then it would have to be exciting, or the audience would riot, and the simple minded conclusions could be more defensible.

Posted by Brent McKnight at 7:13 PM