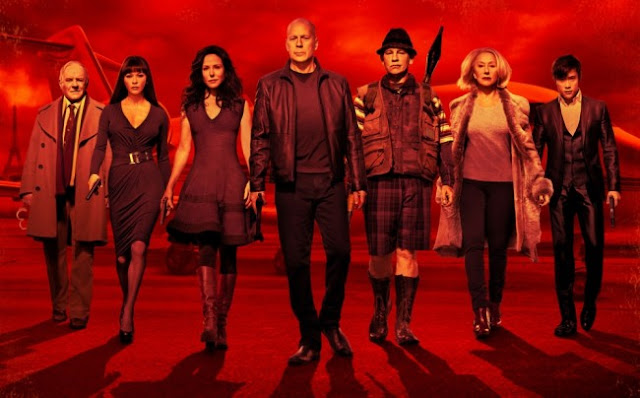 As you most likely guessed from the title, “RED 2” is the sequel to a movie called “RED,” which, in reality, has little to nothing to do with the color. Instead we’re talking about an acronym that, in this instance, stands for “Retired Extremely Dangerous.” This is a designation the CIA, at least in the world of Warren Ellis’ comic that serves as the source material, gives to former agents that could still prove to be a threat down the road. They may not be in the field anymore, but they’re still good at killing. Who knows if this is a real thing or not? Never having worked for the CIA, or any intelligence gathering agency for that matter, I can offer no insight on the matter. I have, however, seen “RED,” so I feel qualified to chime in on that side of the conversation.

Many of you have likely also seen “RED,” otherwise Summit probably wouldn’t have wasted the time and considerable resources to make a follow up. If you saw the first film, a very, very loose adaptation of Ellis’ comic of the same name, then you know exactly what to expect from “RED 2.” This is a film full of people you like, doing what they do well, and being likeable, even when doing things that are ostensibly terrible, like killing lots of people. This is a tale of international espionage, you expect a substantial amount of bloodshed going in. The sequel is almost as much fun as the first film, some have argued more, but I don’t buy it, but at the end of the day, is just as forgettable. You’ll watch it and have a decent time, and never need to think about it again after you leave the theater.

As far as plot goes, “RED 2” is a simple story told in a convoluted way. An old, Cold War era op has come back to bite Frank Moses (Bruce Willis) and his old agency pal Marvin (John Malkovich), on the ass, and they have to fix it. That sounds easy enough, until you pile layer after layer of complications on top of it. Various bad guys, like Horton (Neal McDonough) and Han (Lee Byung-hun), are out to get them. Old flames, like Katja (Catherine Zeta-Jones), aka Frank’s Kryptonite, throw a wrench into things. Oh, and every government in the world wants what they’re after, and their old buddy Victoria (Helen Mirren), may or may not also be trying to kill them. And if all of this isn’t enough to contend with, Sarah (Mary-Louise Parker), the civilian love of Frank’s life, the only thing in the world he gives two shits about protecting, insists on tagging along and participating in their spy games because she’s bored. 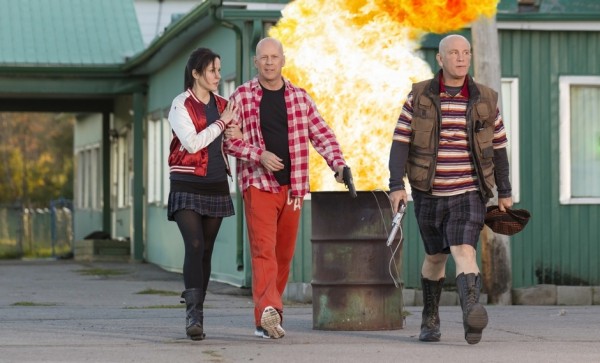 The story needlessly complicated, and while there are an exhausting number of villains floating about, none ever stands up and owns the antagonist role. It isn’t anyone’s fault, they’re all worthy enemies—Han is the best assassin in the world and driven by a hatred for Frank, Horton is a sadistic torture expert, and Katja is fiercely loyal to her homeland—but none of them get enough time to become the primary bad guy. In fact, each one is absent from the movie for so long that you wonder if they’re actually going to ever show up again. “RED 2” bogs down with all of the various threads, and it goes far longer than it needs to. Every time you think you’re nearing the end, there’s another bend in the road.

But these are minor points, as the real purpose of “RED 2”is to watch a bunch of great actors bounce off of each other and kill a bunch of faceless goons, and it does not disappoint on either front. Willis gives Frank a calm, sarcastic edge that is almost world-weary as he slices through seven heavily armed, highly trained soldiers almost as a matter of course. He’s seen so much in his life, so many crazy things, that the outlandish is pedestrian to him. What really excites him are the bulk buying opportunities at his local Costco, and the fact that he hasn’t killed anyone in month. While Frank gleefully wallows in his new suburban lifestyle, Sarah, frankly, is bored. The early stage of their relationship was an action packed affair, and now things are so, normal. Parker offers a counter to Willis’ Frank. He’s had more action than you can imagine, she just wants a taste. His attempts at protection are patronizing, and her inserting herself into situations that are far more dangerous than she knows are just annoying and stupid. This shtick is tired from the outset, but that doesn’t stop the film from pounding it into the ground over and over again.

As those two butt heads over Frank trying to keep Sarah safe, Marvin, Frank’s only real friend in the world, encourages Sarah’s intrusions, ostensibly to help take their relationship to a new level. Bullets and romantic advice fly with a similar frequency, often at the same time. The banter is sharp and continual, and everyone is as good as you want and expect them to be. Mirren’s icy femme fatale is priceless, and she manages to be regal even when simultaneously unleashing a volley of sniper fire and flirting with Ivan (Brian Cox). And somehow Frank and Sarah’s relationship is everyone’s business.

As far as big summer movies go, “RED 2” is a solid addition to the gang. It won’t have the staying power of an “Iron Man 3,” the spectacle of “PacificRim,” or the utter failure of “The Lone Ranger.” I can’t help but lump it in with the likes of “White House Down,” though action oriented, this is more of a straight ahead comedy. The shootouts are strong, though the hand-to-hand combat scenes are hacked up pretty well in the editing. Then again, Bruce Willis is getting old, and it’s hard to keep up with actors 20 years younger. Overall we’re talking fun, firefights, and an enjoyable, but forgettable time at the movies.

Posted by Brent McKnight at 5:36 PM