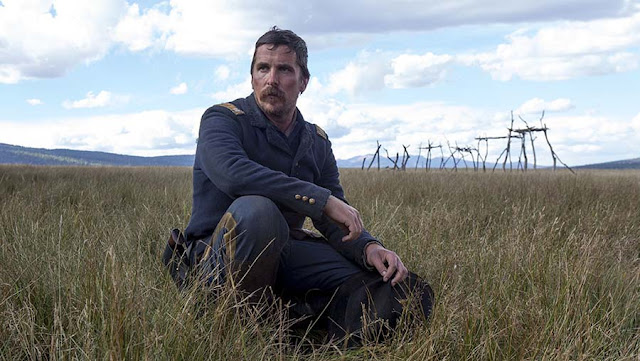 Scott Cooper’s Hostiles shares a substantial amount of DNA with old school westerns of bygone eras. It’s the direct descendent of John Ford and John Wayne, in both positive and negative ways. Sweeping and grim, it attempts to shine a light into the deepest, darkest corners of a man’s soul; it’s also dicey in a Searchers way when it comes to the ingrained racism of its protagonist and this particular era of American history.

In the hands of cinematographer Msanobu Takayanagi (The Grey, Black Mass), Hostiles practically fetishizes the natural world of the western frontier. It’s all wide vistas and harsh but gorgeous landscapes, swept by wind, sparsely inhabited by a few hardscrabble and hearty souls. And the plot reflects this spare, barren locale. 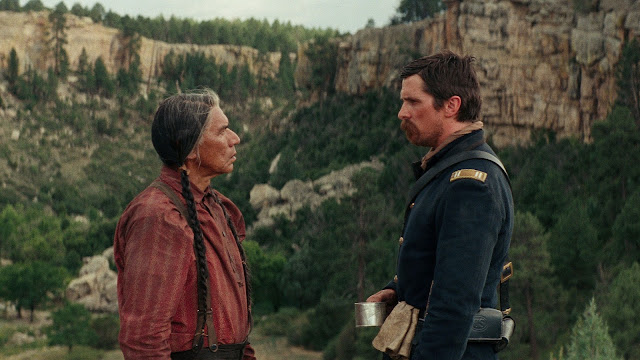 Set in 1892, Hostiles tells the story of Captain Joseph J. Blocker (Christian Bale), an Army officer legendary for his ability to kill Indians. Because Blocker is a good company man and never defies an order, he reluctantly agrees to transport the dying Chief Yellow Hawk (Wes Studi), Blocker’s long-time nemesis and a mirror image as far as brutality and murder go, back to his ancestral home.

What follows is a grim, Heart of Darkness style journey through the wild west that attempts to plum the depths of humanity and reveal some hidden truth about the effects of a lifetime of killing and hate and carnage, and how underneath it all, we’re all the same. The problem is, we’ve seen it before, and the narrative never shovels away enough dirt to peer below the surface or offers anything interesting to say. 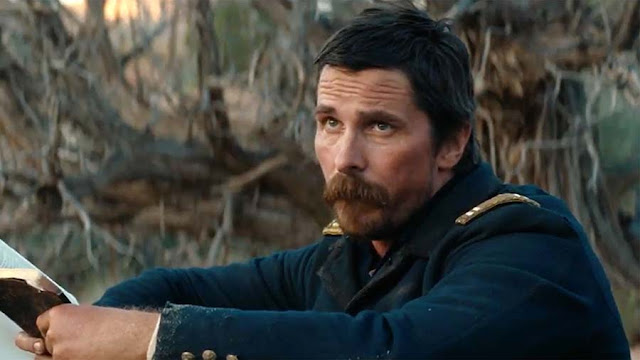 Bale and Studi both give fantastic performances as stern-faced western archetypes. They’re tired, ground down, and coming to the close of violent lives forced upon them more by press of circumstances than by anything else. They’re killers because that’s who they are, what they do, and what the situation demanded, and neither stopped much to think about it before now. Despite the nuance and layers given to what could easily have been spiteful, stock, virulently racist cowboys and Indians stereotypes, the film still offers little in the way of conclusion, little more than two dudes able to look at each other and think, “You’re not who I thought you were after all.”

Cooper’s narrative twists itself into knots trying to reconcile its attempts to be a classic western tale with more modern sensibilities, and the result plays awkward and tone deaf. There’s a cringe-worthy scene early on between the bleeding-heart journalist and overly pragmatic military man that attempts to paint the story in terms of current liberal vs. conservative terms that does not work. 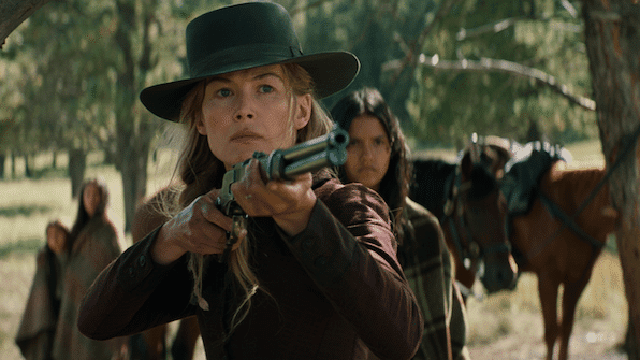 Yellow Hawk and his family (including the woefully underutilized Adam Beach and Q’orianka Kilcher) even team up with their captors/chaperones when confronted by more immediate threats, like a cadre of rapey fur trappers or a crew of renegade Comanche. But somehow, in trying not to stereotype Native Americans as either stoic vessels of wisdom or wild savages, it paints them as both.

Again, they hang a lot on showing that everyone is fucked up, but it fails to have any more coherent point than that. And in pursuit of this goal, the film meanders around the wilderness, randomly killing off members of the party and picking up new strays along the way. They inherit Rosalie Quaid (Rosamund Pike), a woman whose entire family is slaughtered by Apache in the opening scene. Pike is strong given what she has to work with and that she, like the Native American characters, primarily exists to prop up the white dude’s redemption arc. There’s a thread with Ben Foster, a disgraced Army sergeant who took things too far—he’s there to point out the arbitrary, realistically nonexistent line between Blocker’s atrocities and his own, between legal and illegal, between hero and villain. 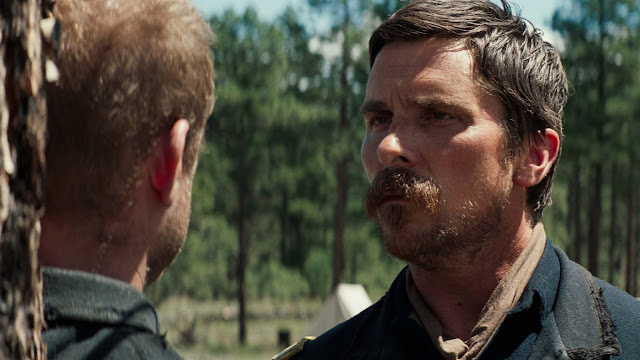 The pace rambles all over—sometimes tense and edgy, others dull and plodding. Orchestral music swells over the epic landscapes, ominous numbers tighten the reins in terse moments. Max Richter delivers a fine score, but while it hits all the right notes, it feels obvious, on the nose, and paint by numbers. It’s really a reflection of the movie as a whole. It’s fine, but…

Hostiles has all the pieces in place, but in the end, more than anything, it leaves the audience wondering why they should care about this latest grim western tale with all the grim western trappings. A too-tidy conclusion leaves the lingering question of what’s the point of it all? And after watching the movie, I don’t really know. [Grade: C]