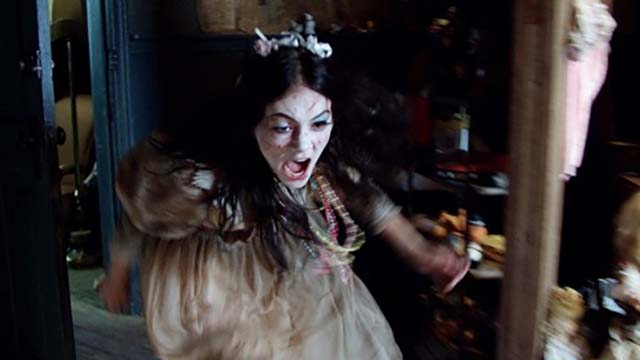 Pascal Laugier hasn’t made a movie since 2012’s The Tall Man, but his brutal 2008 masterpiece Martyrs may be the defining moment of the New French Extremity movement. (His only other work in that time was an episode of the TV series XIII.) He’s set to return to theaters this year with Ghostland (or Incident in a Ghost Land depending on where you look). If that’s not enough to perk your ears up, there’s a short, to-the-point new teaser trailer to whet your whistle.

Teaser is the right word for this snippet of Ghostland. It’s barely even that. Other than a palpable atmosphere of dread and the sense that things are going to get seriously messed up, there’s not much more to behold.

This synopsis from Screen Anarchy offers a bit more insight into the actual plot:

Following her aunt’s death, Colleen and her two daughters – the eldest, Beth, totally locked-in and shy, finds comfort in the stories she invents in the books she writes, and Vera, way more open and self-confident, inherit her house. However, during their first night in this new home, murderers break-in, pushing Colleen to fight to save her daughters’ lives. During this highly traumatic night, the girls’ disparate personalities diverge even further.

Sixteen years later, Beth becomes a famous horror author with a perfect family and life in Chicago, while Vera can’t cope, and loses her mind faced to an unshakable sense of paranoia. Daughters and mother finally reunite at the house where Colleen and Vera still live. It is only then that strange events begin to take place…

That’s a lot to unpack. There’s the trauma of what sounds like a home-invasion horror yarn, and it looks like we’ll get to see the long-term results of that experience manifest and play out in the characters’ lives. And if you look at the photos from Bloody Disgusting, you’ll see what appears to be creepy dolls and torture, so there’s that. It's also been compared to the work of Stephen King. All in all, it offers Laugier fertile ground to root around in and find the dark and ugly.

The Tall Man is a bit of mixed bag, but it’s better than some give it credit for. Still, it’s hard to live up to the bar set by Martyrs, which, though divisive, stands as one of the defining moments of a cinematic movement. That’s no small feat.