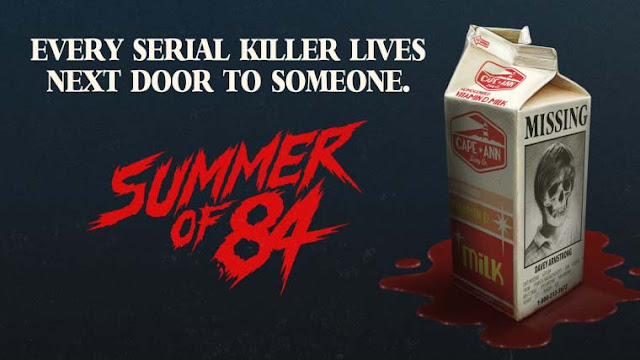 “The suburbs are where the craziest shit happens.” True, little dude, true. Between It and Stranger Things, we’re in the midst of an 1980s suburban horror nostalgia tsunami. The latest entry into this cannon looks to be Summer of 84, and as it’s the brainchild of the folks behind Turbo Kid, this new trailer has my full attention.

So, if you haven’t watched it, Turbo Kid is a super rad and super loving send up of the wave of Mad Max inspired post-apocalyptic knock offs that hit in the ‘80s. Movies like The New Barbarians and 1990: The Bronx Warriors. It rules, both poking fun at those cheap facsimiles while celebrating how fun they are. And now the same team is back to do the same for slashers of the same era, and I’m rather jazzed up about the whole thing.

Summer of 84 is directed by RKSS (AKA Roadkill Superstar), a cadre of Canadians made up of François Simard, Anouk Whissell, and Yoann-Karl Whissell. They’re working from a script by Matt Leslie and Stephen J. Smith, which wound up on the “Blood List” in 2016—think a Black List for horror and genre scripts.

Like RKSS’s previous offering, this trailer hits all the right notes. What they came up with looks like a less supernatural Fright Night, part of the my-neighbor-may-be-a-killer subgenre.

Every serial killer is somebody’s neighbor. For 15-year-old Davey, the thought of having a serial killer in his suburban town is a scary yet exciting prospect at the start of a lazy summer. In hormonal overdrive, Davey and his friends dream of sexual conquests until the news reports of the Cape May killer. Davey convinces his friends that they must investigate, and they uncover that his next-door neighbor, an unassuming, single police officer, could be the prime suspect. Could Davey possibly be right, or is it his overactive imagination?

When I first heard about this production last year, it came with this longer, more detailed description:

Growing up on a quiet cul-de-sac in Ipswich, Massachusetts, Davey’s desperate to believe there’s more to life than what he sees from his bedroom window. For him, every tabloid cover is a peek into the world as it really is, as it really must be past the borders of the humdrum neighborhood where he and his best friends Eats, Farraday, and Woody have grown up. Sure they spend their summers playing nighttime flashlight tag (“Manhunt”), riding their BMX bikes all over town, and spying on the hot, sometimes topless chick next door, Nikki… but Davey thirsts for more. As their investigation heats up, Davey and his best buds soon discover Mr. Mackey is on to them, and their suspicions quickly become all too real.

From this first look, Summer of 84 appears way less campy than Turbo Kid. but the vibe and tone are definitely suited to the material. And if nothing else, this crew certainly has a handle on what makes these movies special and why we still love them.