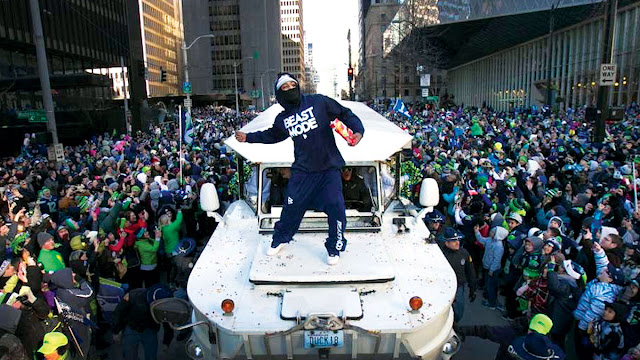 For a man notorious for not talking, Marshawn Lynch is imminently quotable: “I’m just about that action, boss,” “I’m just here so I won’t get fined,” “Run through a mother fucker face.” In Lynch: A History, David Shields combines all of his greatest hits, clips of the former Seahawks running back’s career from high school through the pros, and unrelated footage and interviews to provide larger context of the man, his life, and the world that formed him.

The result of this juxtaposition forms a biographical documentary collage. Of Marshawn Lynch the man, Marshawn Lynch the reluctant public figure, but also much more. As Shields pieces together these snippets and soundbites, we get a picture of the person, but also of Oakland, the city that forms a central piece of who he is, and what it means to be a black man in America, especially a black man in the public eye.

Lynch watches like a cinematic companion piece to Shield’s book Black Planet: Facing Race During an NBA Season. He uses the football player as a lens through which we can view race and class and sports and media and history, and how these things overlap and collide. Clips of Marshawn diving into the endzone backwards and grabbing his crotch, his Beacon Plumbing commercials (if you haven’t seen then, find them on YouTube—“look at the mess you done made”), and bowling over defenders butt up against archival footage of the founders of the Black Panther Party, Maxine Hong Kingston, Tupac, Bruce Lee, and countless other Bay Area residents and radicals.

Over the course of the film, these mosaic tiles form a complete, complex picture of Lynch. He’s silly and self-aware and loves Skittles; he’s deeply committed to his home and community; he’s bawdy and thoughtful and authentic and full of contradictions. During a suspension, he practiced with a local Oakland high school football team and rode the Bart home with fans after being ejected from a game. Shields uses these public materials to create an intimate look a private, guarded man who rarely lets outsiders peek behind the curtain.

The style of the film is also an extension of Shield’s literary work. A creative writing professor at the University of Washington, much of his output focuses on the idea of collage, a type of literary sampling. He uses snippets and quotes like a DJ uses beats and hooks, to create something new and tell a larger story.

This meticulous patchwork, assembled with intense precision, feels both literary and cinematic. These clips are sure to elicit fond memories for Seahawks fans, and more than a few pangs as we relive the final moments of Super Bowl 49. But it also contextualizes Lynch in a societal framework of sports, media, deeply rooted systemic racism, and the larger changing tide over the course of his life and beyond. Lynch: A History offers an engaging portrait of the man, the athlete, his life, and his time, as well as a fascinating experiment in narrative craft, form, and construction.