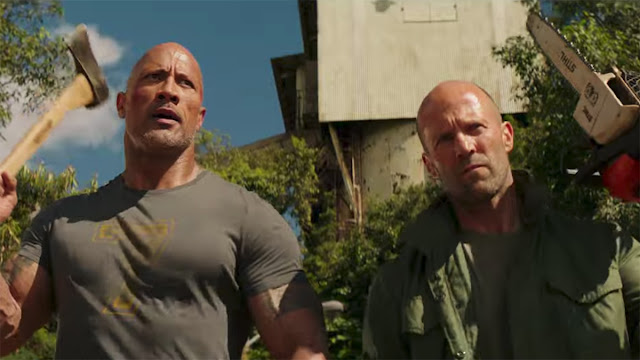 At this point, I don’t need a trailer to know I want to see Fast & Furious Presents: Hobbs & Shaw. But that doesn’t mean this latest, and “final,” trailer doesn’t make me smile like a drooling idiot. Because it does. This is ridiculous, and I mean that as the highest praise. I didn’t stop grinning the whole time. Check it out below.

I love that Hobbs & Shaw has completely abandoned any pretense at reality. Just that opening sequence in this trailer of the car spinning in slow motion underneath the semi; the motorcycle rider ducking beneath not one, but two trucks going in opposite directions; and then the biker launching off of their car and bursting through a double-decker bus. That’s a chef’s kiss emoji if I’ve ever seen one.

Basically since Fast 5, this franchise has been a constant escalation of action absurdity, and Hobbs & Shaw feels like the logical conclusion of this trajectory. It's definitely their, "Hold my beer," moment. Dwayne Johnson’s Hobbs has always been a beefy action cartoon, and Idris Elba’s antagonist is a straight up comic book supervillain. And they’re going to fight him with an axe and a chainsaw. And I am so, so here for every last second.

[Read More: 'Hobbs & Shaw' Trailer: And You Thought the Other 'Fast & Furious' Movies Were Ridiculous...]

Believe it or not, Hobbs & Shaw does actually have a plot, unnecessary as it may be. Here’s the synopsis if you’re interested in that type of thing:

Ever since hulking lawman Hobbs (Johnson), a loyal agent of America's Diplomatic Security Service, and lawless outcast Shaw (Statham), a former British military elite operative, first faced off in 2015’s Furious 7, the duo have swapped smack talk and body blows as they’ve tried to take each other down.

But when cyber-genetically enhanced anarchist Brixton (Idris Elba) gains control of an insidious bio-threat that could alter humanity forever — and bests a brilliant and fearless rogue MI6 agent (The Crown’s Vanessa Kirby), who just happens to be Shaw’s sister — these two sworn enemies will have to partner up to bring down the only guy who might be badder than themselves.