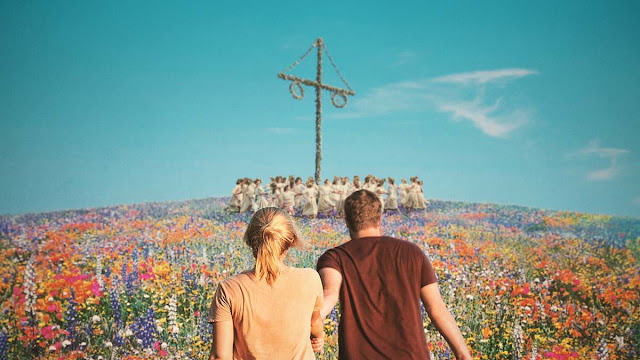 When the lights went down, I certainly didn’t expect to describe Hereditary director Ari Aster’s Swedish pagan cult horror Midsommar as either “silly” or “a hoot,” but if the glass slipper fits… This is heightened ‘70s exploitation that builds to a bug-nuts crazy climax that had me rolling and clapping. Think hallucinatory Douglas Sirk nightmare by way of Jodorowsky-style surrealist fairytale, all punctuated with bursts of gore and terror.

At 140 minutes, Midsommar is brutally overlong. But it’s also gorgeous, with every shot framed and staged like an impressionist painting, meticulously crafted, unnerving and strange, and honestly, just a lot of goddamned fun. Especially if you like watching bros argue about who has the rights to a particular doctoral thesis topic. I’m not joking about that. 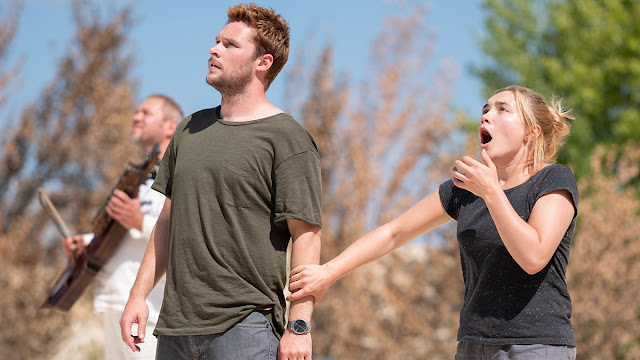 For all the advanced hoopla and handwringing about, “Don’t spoil Midsommar, won’t someone think of the children,” the plot’s easily predictable, especially if you’ve ever seen a movie about an isolated, seemingly idyllic group of upsettingly peaceful folks before. Not to mention there are background paintings throughout that explicitly spell out every single thing that will happen. But the plot is really beside the point. More important than surface mechanics are mood, tone, underlying conflicts, the ripple effects of trauma, and spiraling weirdness.

After enduring an unimaginable tragedy, Dani (Florence Pugh) accompanies her shitty-bro boyfriend, Christian (Jack Reynor), and his shitty-bro friends, Mark (Will Poulter) and Josh (William Jackson Harper), to Sweden to the rural commune where their pal Pelle (Vilhelm Blomgren) grew up. Ostensibly there for a summer festival that only happens every 90 years, what appears serene and peaceful—we’re talking flowing white robes and random packs of flautists—turns out, of course, to mask something much darker and more sinister. Spooky symbols abound, as do unsettling rites and rituals. There’s even a sacred building where no one’s allowed. It’s all blinding sunshine and terrifying smiles.

[Read More: 'Midsommar' Trailer: What Could Possibly Go Wrong in Such a Brightly Lit Horror Movie?] 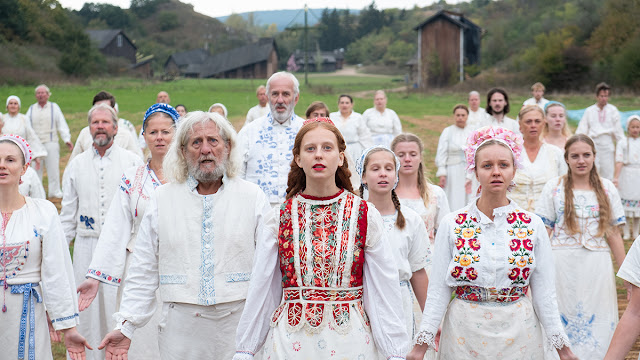 Working with cinematographer Pawel Pogorzelski (Tragedy Girls), Aster does a fantastic job creating an off-kilter edge to the sublime setting. They paint a beautiful picture, but one that, upon closer inspection, isn’t what it first seems. Set in the far north, night never truly takes hold and a warm light bathes the entire production. Darkness walks in full view, not even hiding, but no one cares to look until it’s too late.

While Hereditary focused in on Toni Collette’s miniatures, Midsommar takes a different approach. Structures and locations are big and open, it’s the people who seem small. The architecture only adds to the vibe. Rooflines and windows slant at odd angles and warp perspective. The whole village—from the people to the buildings—is constructed to feel off, to unsettle and unnerve, both the audience and the characters. Mirrors and reflections play a significant role visually, skewing how we view people and driving home the multiplicity in each individual and the cult itself. 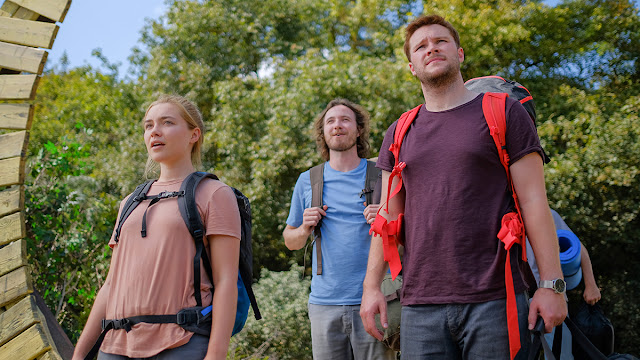 The characters ingest a great deal of psychedelic substances, and Aster captures what tripping in nature actually feels like more accurately than any movie I’ve ever seen. Using digital effects, everything pulses and breathes; shadowy forms lurk on the edge of focus; it’s staged and shot and manipulated to disconcert, placing the characters, specifically Dani, on the brink, where one sour note can send her off on a bad trip.

Florence Pugh is, as I’ve come to expect whenever I see her name in the credits, excellent. Awash in grief, trapped in a terrible relationship she doesn’t realize is terrible, Dani puts on a brave face in order to please her inattentive, disinterested partner, only to crack under the strain from multiple angles. Aside from her, the rest of the cast is fine, but no one has more than one specific job to do. 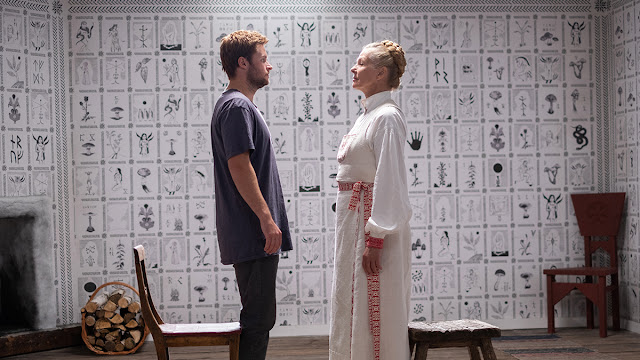 Christian is the type of guy who constantly complains about his girlfriend, telling his friends he wants to break up with her for a year, but never does, instead shrinking farther and farther away until he’s barely present. Reynor plays the dim-bulb well enough, but he’s kind of a one-trick pony. Though he has some sheer goofiness as we build to the climax that’s entertaining as hell. Poulter is funny as Mark, but primarily exists to drive home Christian’s dickheadishness, and he outlives his narrative usefulness by the time they arrive in Sweden. Harper is solid but is mostly there to talk about his thesis and argue about the subject with Christian, which gets old, bogs down the pace, and serves to deliver clunky bouts of exposition.

Midsommar reminds of me of Gone Girl in one key way, in that it’s high-class trash; a meticulous, artsy, fastidious take on what’s essentially a seedy pulp story. It’s fancy pants exploitation and I’m having trouble sussing out the intent. On one hand, to casually look at the film, it appears to play it totally straight-faced. But if that’s the case, it’s often over-serious and overwrought to the point of hilarity, like maybe Aster believes his own hype after the near-universal acclaim of his debut feature. 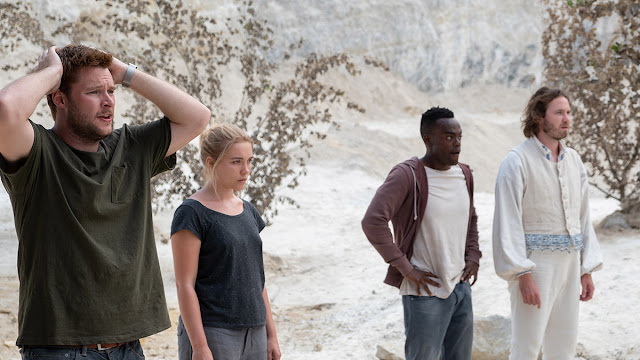 On the other hand, there are things so patently ridiculous—things I won’t talk about here but that I desperately want to—it’s damn near impossible to imagine they’re not intended to elicit a laugh. Aster’s either totally full of himself and his own genius or he’s having a damn fine time wallowing in the slop.

Whatever the intension, I also had a damn fine time with Midsommar, even if it’s bloated and a bit too high on its own brilliance. I feel like this is a movie everyone will praise, but for reasons drastically different than my own. It’s pulpy, often borders on camp, and cut through with weirdness and blood. This is low trash masquerading as high art and I’m pretty into that.

Nice review. It's REAL. Have scanned all the reviews I could find but everyone is too high on impressing with their writing talents and 'critical analysis'. No, thanks, I'll pass. It sucks when you want to talk/write about something but can't without being a 'spoiler' but you managed to do it just fine. I saw this in Phoenix-prob same night as you. I'm a member of the Phoenix Film Critics Society. You are kinder in your review. I love the deep creep but also want to be scared out of my mind by a horror film and this just didn't do it for me. LOVED Hereditary, so was very disappointed. However, I did appreciate the 'art' from acting to art direction. All that effort was not lost on me.
Thank YOU!