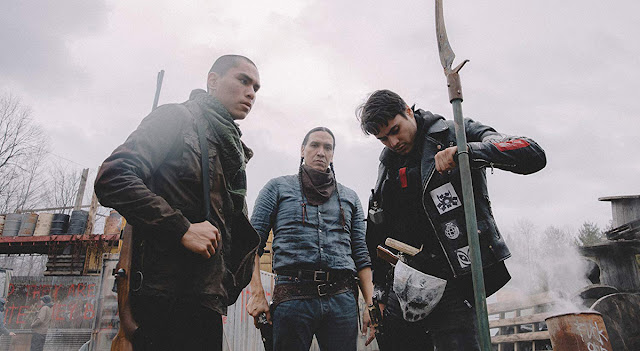 People often complain about zombie movies. To be fair, there are a lot of trash zombie movies to wade through. But there’s a reason we keep looking, because when they’re good, they can be great. Once in a while a film comes along and reminds us what can be done within the subgenre confines and breathes a bit of new life into the walking dead. Think Train to Busan, Girl With All the Gifts, or The Night Eats the World, among others. By all accounts, Jeff Barnaby’s First Nations horror tale, Blood Quantum, is one such film. It’s finally getting a release, so check out the red band trailer.

With the current demonstrations against the natural gas pipeline on Wet'suwet'en tribal land, Blood Quantum feels especially timely and pressing. It hearkens back to the social commentary found in George Romero’s zombie movies, but with a current, updated spin about a people too often forgotten and overlooked by outsiders.

The dead are coming back to life outside the isolated Mi’gmaq reserve of Red Crow, except for its Indigenous inhabitants who are immune to the zombie plague. Traylor, the tribal sheriff, must protect his son’s pregnant girlfriend, apocalyptic refugees, and reserve riffraff from the hordes of walking white corpses.

Directed and written by Mi'gmaq filmmaker Jeff Barnaby and featuring an Indigenous cast, the film stars Michael Greyeyes (Fear The Walking Dead, True Detective), Elle-Máijá Tailfeathers (On the Farm) and Forrest Goodluck (The Miseducation of Cameron Post, The Revenant).

The film premiered and hit the festival circuit last fall and has made the rounds. (Just last week I missed a screening here in Seattle.) Fortunately, the rest of us don’t have to wait much longer. Shudder plans to release Blood Quantum in Canada on March 27 and in the U.S. later this spring.
Posted by Brent McKnight at 8:06 AM