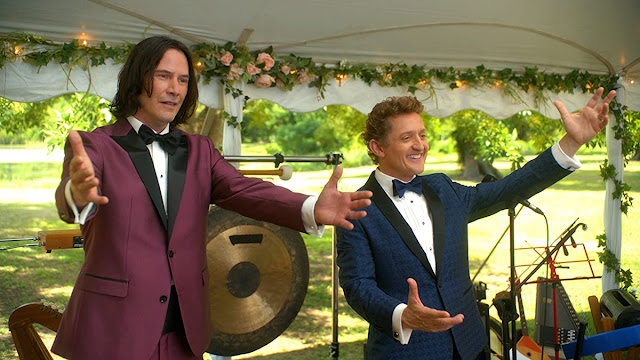 COVID-19 continues to rewrite the world, especially here in the U.S. because we’re too cool to wear masks and not flood public spaces the second the weather got nice. It’s affected every industry, and the entertainment industry is no different. With theaters closed, limited, or closing, and most productions halted, everything is delayed. Studios and distributors are scrambling to find new, profitable ways to get their films in front of audiences. One movie that’s shifted its plans is Bill & Ted Face the Music. The long-gestating sequel has a new release date and new strategy, and a new trailer to mark the occasion.

Orion Pictures will now release Bill & Ted Face the Music on September 1. It opens in select theaters, which probably means almost entirely drive-ins at this point, and on VOD services.

It’s still one of those movies I can’t believe is actually happening, almost 30 years after the Wyld Stallyns went to hell then rocked the world. That said, this trailer continues to look like a lot of damn fun. Whatever the delivery mechanism, I’m there day one.

[Related Reading: 'Bill & Ted Face the Music' Trailer Reminds Us to be Excellent to Each Other]

The stakes are higher than ever for the time-traveling exploits of William “Bill” S. Preston Esq. and Theodore “Ted” Logan.  Yet to fulfill their rock and roll destiny, the now middle-aged best friends set out on a new adventure when a visitor from the future warns them that only their song can save life as we know it. Along the way, they will be helped by their daughters, a new batch of historical figures, and a few music legends – to seek the song that will set their world right and bring harmony in the universe.

Since roughly March, we’ve seen a continual flow of big summer movies delayed and pushed back. It started slow, a few weeks here, a month there. But gradually, major tentpoles opted to wait until late in the year, sometime in 2021, or even leave a lingering TBD. A handful smaller movies, mid-tier releases and such, have opted for streaming services and VOD platforms, with moderate success. As we attempt to maintain responsible social distance, drive-in theaters across the country have seen a resurgence. (There’s also a great article about how, in the void of big blockbusters, indie horror films have ruled the roost this summer.)

For most of this time, people kept an eye on Christopher Nolan’s Tenet. That was the canary in the coal mine. Nolan and Warner Bros. remain steadfast that they would release the film, in theaters, this summer. In fact, as states began to ease quarantine regulations, a number of theater chains scheduled their reopening around the movie.

However, the studio kept pushing the date back, a few weeks at a time. Earlier this week, Warner pulled the sci-fi thriller from the schedule. They still plan to release this year, but have no specific date at the moment. In the wake of this decision, AMC delayed their plans to reopen.

The industry looked to this specific release as a marker. It served as an indicator that things were going to get back to business as usual, as a sign of hope that things are getting better. And it looks like those hopes have now evaporated.

In the wake of this, I’m not surprised to hear the Bill & Ted news. Back in April, Trolls World Tour became the first studio release to entirely bypass the theatrical model, opting for a “premium rental” release. Others, like The Hunt and still-in-theater titles like The Invisible Man and Bloodshot followed suit. But again, those are less expensive, lower profile offerings.

With the Tenet news and subsequent delay of theatrical openings, studios have difficult choices to make. Some are surely going to hold off for theatrical runs, especially big films like Tenet, Wonder Woman 1984, and the latest James Bond movie, No Time to Die. But when it comes to smaller and mid-budget movies like Bill & Ted 3—with a reported budget of around $25 million—expect to see more out-of-the-box thinking when it comes to release strategy.

[Related Reading: 'No Time to Die' Trailer: Get Your First Look at James Bond's Next Adventure]

There’s sure to be tinkering with the formula as studios figure out the most profitable model. But people are hungry for movies—look at the recent successes of Netflix movies like The Old Guard and Hulu’s Palm Springs—and the studios are sure to find way to capitalize on that.

It’s going to be interesting to see how this develops moving forward. Will things ever truly get back to normal, or has COVID-19 permanently altered the way we distribute and consume movies? Will we see an influx of middle-budget titles, films that can fit into this new model and still make money? There are a lot of questions and not a lot of answers at the moment. However it plays out, it should be intriguing to watch.

In the meantime, Bill & Ted: Face the Music lands in (probably mostly drive-in) theaters and on VOD September 1. Be excellent to each other.
Posted by Brent McKnight at 8:09 AM