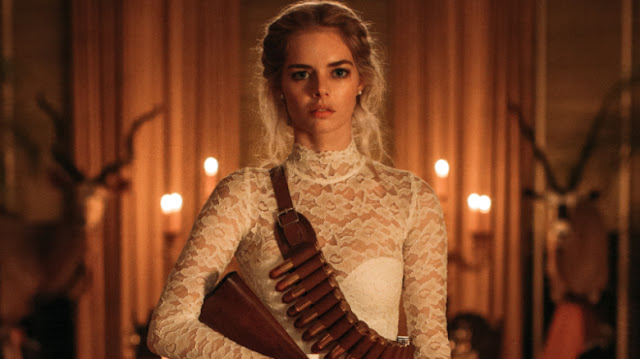 Like clockwork. Every August, after the big-budget studio tentpoles wrap their summer run, a movie shows up. Maybe it came out of nowhere. Maybe it looked kind of stupid. Maybe both. But it arrives on the scene, is a total blast, and breathes a bit of new life into the late summer. Happens damn near every year. This year, that honor goes to Ready or Not. And its energy is especially welcome at the end of a summer full of flaccid, bland, mediocre franchise installments no one wanted, asked for, or saw in the theater.

A few months ago, when the trailer first appeared, if you’d have asked if Ready or Not, the hide and seek movie, was going to be the most fun theatrical movie of the summer, many folks would have called you crazy. Yet here we are. A movie based on a child’s past time, as ridiculous a premise as it may be, turns to be a wild, gory, clever play on “The Most Dangerous Game,” complete with a bloody, eat-the-rich class war motif. Happy August, everyone. 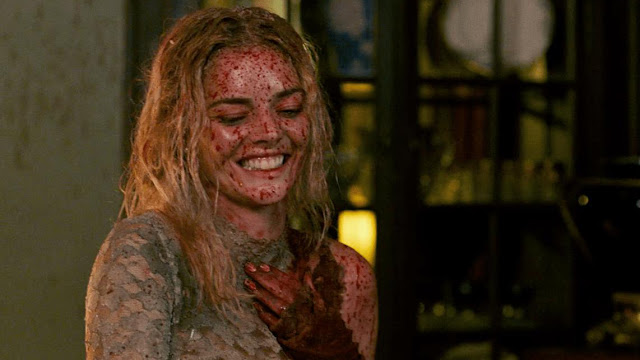 Raised in foster care, all Grace (Samara Weaving) ever wanted was a family, which she gets on her wedding day by marrying Alex (Mark O’Brien). Sure, the Le Domas family is a bit strange, and absurdly wealthy, having made their fortune in games. And they do have an odd tradition where, when someone new joins the clan, they pick a card out of a weird wooden box, on that card is a game, and they must play that game. A bit off, but innocuous enough, right? Unless that card reads “Hide and Seek.” Which Grace’s does. Which means, after a head start, the entire family hunts her down in brutal fashion. God damn in-laws.

To say much more is to ruin the fun, but what follows is tense and witty and frenetic. The chase is gleefully mean-spirited, giddy in its use of gore and blood spatter, and fast-paced terror full of crossbows, axes, evil children, creepy masks, and vicious manservants. There’s more to the story than initial revealed and, working from a script by Guy Busick and Ryan Murphy, directors Matt Bettinelli-Olpin and Tyler Gillett dole out necessary information bit by bit as the madness and mayhem unspool. 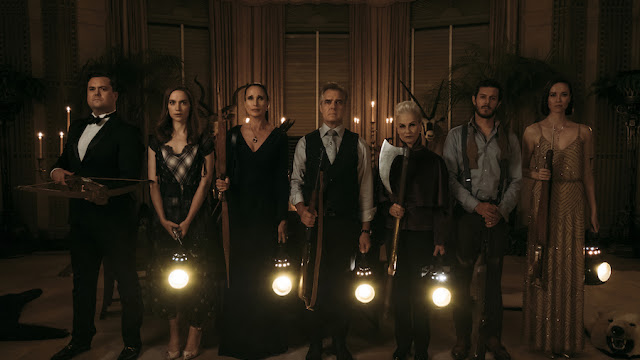 For all the bloodlust and chaos, family forms the core of Ready or Not. Alex is estranged from his—father Tony (Henry Czerny), mother Becky (Andie MacDowell), brother Daniel (Adam Brody), sister Emily (Melanie Scrofano), brother-in-law Fitch (Kristian Bruun), sister-in-law Charity (Elyse Levesque), and Aunt Helene (Nicky Guadagni)—for, well, obvious reasons. They hope to pull him back into the fold after years of absence, to make their family whole once more. Grace is looking to fill a void in her own life. It’s all about fixing a hole, smoothing over a gap. Albeit often in dark, twisted fashion.

The family is all fantastic and perfectly cast. Czery’s stout patriarch, dedicated to the cause, devolves into sheer manic, over-the-top horror glory. Guadagni plays Helene as a near-demonic, axe-wielding madwoman who is all the way in. Scrofano’s inept Emily makes a nice comedic pair with Bruun’s Fitch, who, though he’s been through this first-hand and heard stories, has never seen it to this extent—fortunately for most of the newcomers, hide and seek doesn’t come up often in the selection process. And Levesque’s Charity is cold and calculating, willing to do whatever she has to in order to maintain what’s hears, the most purely capitalist of the bunch. Alex is the only real weak link. He’s a tepid milquetoast and by far the least interesting, least developed character in the entire movie. 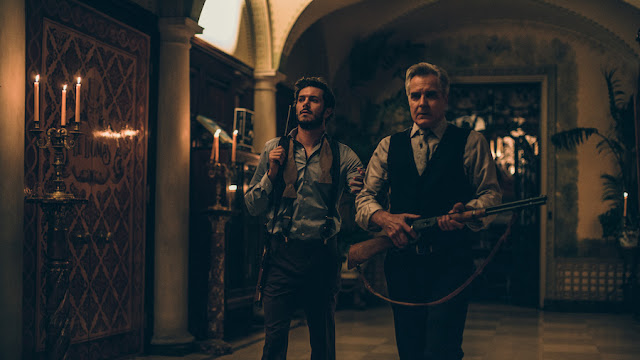 On the other end of that maniac family spectrum, however, are MacDowell and Brody. While most of the others have value and play their part in the larger drama well, they’re the standouts of the supporting players. MacDowell is the heart of the family, a dedicated matriarch devoted to her brood and bringing Alex home. More than the ritual, she simply wants her son back and safe. All the family members deal with the strain and pressure of this peculiar tradition in different ways. While some embrace it, conflict burns inside Daniel, which he attempts to extinguish with booze. He’s a participant, but a reluctant one. As children, he tried to protect Alex from the ugly truth. Brody captures the turmoil, hesitation, and internal back-and-forth with charm, earnest aplomb, and a resigned sadness.

But for everyone else, Ready or Not is Weaving’s show, and she’s magnificent. She’s compelling even in movies I don’t particularly care for (The Babysitter), but this gives her a chance stand tall in a big way. Before all hell breaks loose, she’s earnest and endearing and nervous, entirely making up for Alex’s total lack of personality and charm. And when things get grim, she’s tough and badass, but in a grounded, realistic way. She’s hurt and scared and freaked out, for good reason, but she’s also desperate and determined to fight and survive. Over the course of the film, she runs the gamut from frightened to angry to broken and done, and she takes the audience on that ride with her. Like I said, I’ve always liked her, but don’t think she’s ever been this good or shown this kind of range. 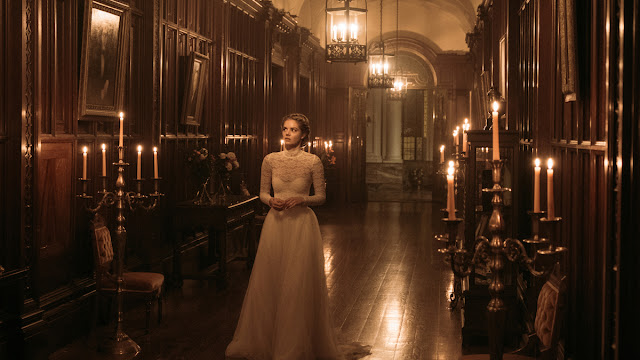 Bettinelli-Olpin and Gillett, working with cinematographer Brett Jutkiewicz (Them That Follow), use the hell out of the expansive Le Domas estate. The first chunk largely takes place inside their mansion, and the filmmakers have a great time exploring giant chambers, dumbwaiters, and hidden servant’s passageways. It not only drives home the family’s wealth and the class discrepancies but provides a diabolical playground as well.

Some of the world building and the story of the Le Domas dynasty plays a bit threadbare. If you look too closely, it might not always hold up. The script generally doesn’t attempt to dive in deep enough to where that’s an issue—it’s content to provide just enough details to make it plausible in an offhand way. For the rest, it relies on pace and tempo to carry viewers over ragged spots you might otherwise peer through. 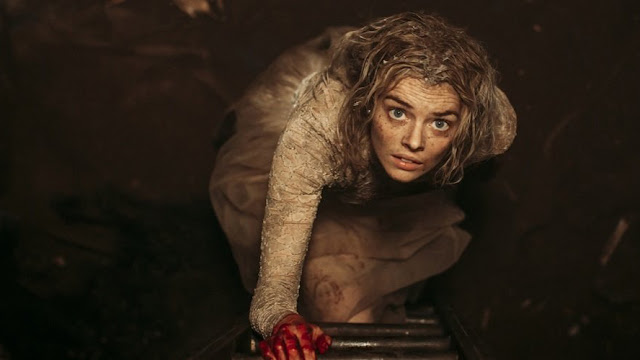 The only significant hitch in this particular giddy up are a few moments later on that focus on the family as they unravel. They’re fine and not egregious is any way, but this is Grace’s movie. She’s the one we want to watch. But when, as we move toward the climax, as the tension and pressure build, and the film cuts away to interfamily drama, it’s often a letdown. At times it works to let the audience take a breath, but at others it kills the forward momentum.

There are a couple of movies I want to reference, titles that people would read and be like, damn, now I want to see that movie. But to do so probably gives away a few too many of the movie’s secrets, in my opinion. So I won’t. Go in cold and prepare for a ride. Just know that Ready or Not is a total blast, full of devilish fun, so much gore, and its fair share of clever reveals and mischievous turns. And Samara Weaving carries it all—as good as the rest of the cast is, she, along with Andy MacDowell and Adam Brody, give the film more depth than it otherwise might have had. For a summer movie season overflowing with bloated, unnecessary, wannabe blockbusters, this couldn’t have come at a better time. [Grade: B+]