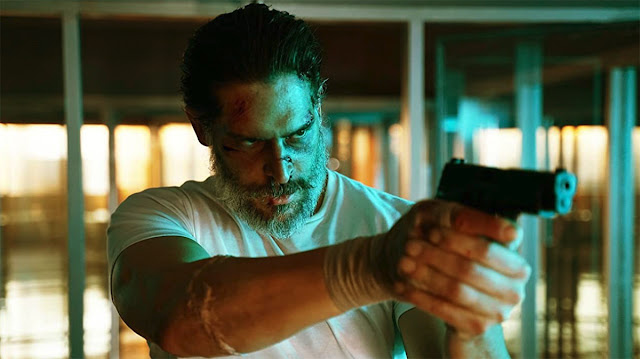 Superhero films are massive at the moment. You probably noticed that. They’re so ubiquitous they’ve even spawned a veritable cottage industry of dark, gritty indie takes on the genre. Not necessarily a new phenomenon—this has been going on for some time—films like Boy Wonder, Freaks, Chronicle, and others put their own spin on the material, viewing heroes through different lenses, approaching the topic from unusual perspectives. The latest entry into this fray is Archenemy from director Adam Egypt Mortimer (Daniel isn’t Real).

Certainly part of a larger trend, Archenemy nevertheless stands solidly on its own. It attempts to have something to say about our collective fascination with going viral, obsession with power, male rage, among other concerns. The film plays with superhero tricks and tropes. Mortimer and company even make inventive use of comic book stylistics, peppering in blasts of awesomely 80s animation in lieu of big budget spectacle effect. They don’t always succeed, missing on a number of fronts, but it’s certainly ambitious.

On his home world, Max Fist (Joe Manganiello) was a superhero, a protector of all. One day, saving his planet from total annihilation at the hands of his archenemy, he fell through time and space and wound up on this iteration of Earth. Or maybe he’s an alcoholic, drug-addled “schizophrenic who lives under a bridge.” The only person willing to listen to his story and maybe, just maybe believe it a little, is a local teen/wannabe content mill reporter, Hamster (Skylan Brooks), who feeds Max booze and exploits his antics for clicks.

Archenemy works best when it places Max at the forefront. It’s a bleak look at the homeless crisis and mental illness and addiction. A scuffed up and broken down Manganiello presents an intriguing figure, and though he chews some scenery, that’s what the character requires, and he sells what he needs to—the audience believes that he believes his tall tales of alternate dimensional heroics.

The biggest flaw is that the film spends too much time focusing on Hamster and his older sister, Indigo (Zolee Griggs). They are the least exciting, least compelling parts of the movie. The actors are fine, but the characters don’t have much meat. Hamster grates and is either gullible enough to buy into this lunatic’s story or callous and cold-hearted enough to manipulate a mentally ill homeless person for his own gain—he vacillates between the two states for the sake of narrative convenience.

For her part, Indigo offers a stock type we’ve seen many, many times before. She’s a drug-dealer-with-a-heart-of-gold who promised their dead parents she’d look after her brother. That’s why she got into the world of drug running and violence. At every turn she’s two seconds away from screaming, “I NEVER WANTED THIS LIFE!!!” into the heavens. Her primary function is to bring The Manager (Glenn Howerton) into the mix and to make an obvious bad decision that kicks off a crisis.

Howerton has a fine time. He’s a gum-chewing mustachioed villain who looks and occasionally dresses like a 1980s tennis pro. But again, much like Max, the story relegates his maniacal weirdness to the periphery to dote on the tepid, monotonous relationship between siblings. There’s potential in their bond, but it never develops or comes through on screen and instead plays tedious and bland.

As is so often the case in superhero movies of this ilk, much of the plot revolves around the is-he-or-isn’t-he question. What are the characters and audience supposed to accept and believe? For Hamster, it’s fun and cute and exciting to play along and feed Max’s delusions—possibly buying into them—until it’s not and things get all too real and dangerous. Hamster is really an idiot, startled by darkness and violence that he himself facilitates. What does he think is going to happen when Max, powers or no, tools up and they go full bore after a gang of vicious drug dealers? If you walk into a kingpin’s headquarters armed to the teeth and don’t expect bodies to hit the floor…huh?

While Archenemy is full of maddening narrative and character inconsistencies, there is cool stuff going on. Even beyond the main premise, the film is full of weird, off-kilter flourishes. A gang of goons wears freaky rubber masks, The Manager brandishes a knuckle ring that says, “Could Be Worse,” and Paul Scheer shows up as a tweaked-out, barbed-wire-head-tattoo-sporting underling. Also, maybe meth gives you superpowers. An engaging stream of strangeness flows throughout.

It also looks fantastic. Working with cinematographer Halyna Hutchins (Darlin’), Mortimer has a sharp eye for staging and composition—even if he is overly in love with blues and purples, though that seems to be part of his signature. He makes use of tight alleys, dingy bar rooms, and even the expansive Los Angeles skyline shot from skid row warehouse rooftops to elaborate theme and feeling. And the action is also a strength. The assault on the enemy stronghold scene is excellent, juxtaposing visceral, bloody violence with lovely stylistic and artistic embellishments. One particular battle stands out, but the entire segment alone might be worth the price of admission.

Ultimately, however, Archenemy proves frustrating. Hamster is inconsistent and never develops any personality beyond hustle, hustle, hustle; Indigo has one note; and the most fun, intriguing characters and interesting ideas take a backseat to rote family drama that carries little weight. The film has big aims, but in the end it takes a bold leap, arms outstretched, but misses the target and plummets to the ground. [Grade: C]