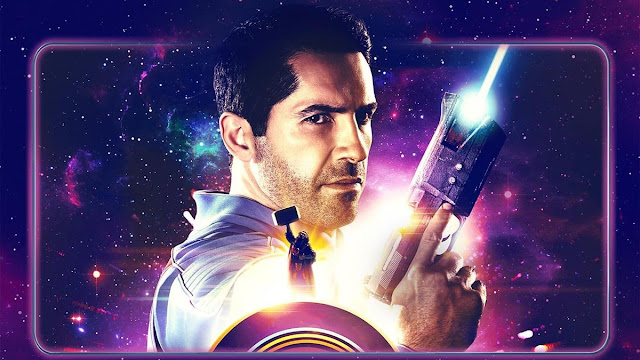 When Max Cloud, AKA The Intergalactic Adventures of Max Cloud, works, it’s a good amount of ridiculous, silly fun, with an intentionally absurd premise, and a solid cast fronted by DTV all-star Scott Adkins. The problem is there’s not much substance to the core idea and the entire thing runs out its course early on, spending any narrative steam in short order. This is a prime example of a concept that might make for a cool short film, but that doesn’t have enough substance for a feature. And the result is a movie that’s stretched and thin.

In the early 1990s, Sarah (Isabelle Allen) is a gamer, obsessed with The Intergalactic Adventures of Max Cloud, a kind of riff on the likes of Contra and Double Dragon. Much like the new Jumanji movies, she gets sucked into the game, appearing as Jake (Elliot James Langridge), a lowly cook and NPC sidekick to the star, cocky, swaggering space captain, Max Cloud, brought to life by Adkins. Together they must navigate a notorious prison planet controlled by the villainous Revenger (John Hannah, The Mummy) and his right hand, Shee (Lashana Lynch, Captain Marvel). 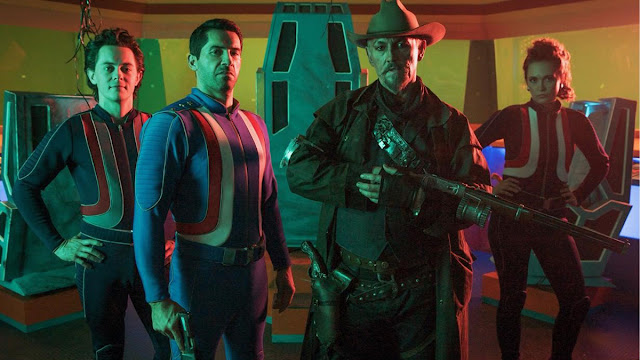 It’s cheesy fun, for a while. Adkins has an absolute blast as the brash, arrogant Max Cloud, galactic hero, a perfect wooden, square-jawed video game hero delivering cliché cut scene-style lines. And not to be outdone, Hannah goes full-on cackling maniac, chewing every last syllable that comes out of his mouth as he plots his escape, and does era-appropriate aerobics videos. One must stay in shape.

Max Cloud leans heavily on the this-is-a-video-game schtick. Everything is flashing pink lights and candy-colored visual as Max kicks his way through space ninjas in a herky-jerky 16-bit style fans from this particular gaming epoch will recognize. A tinny, synth-laden score and familiar stock sound effects round out the fourth-gen-style package. 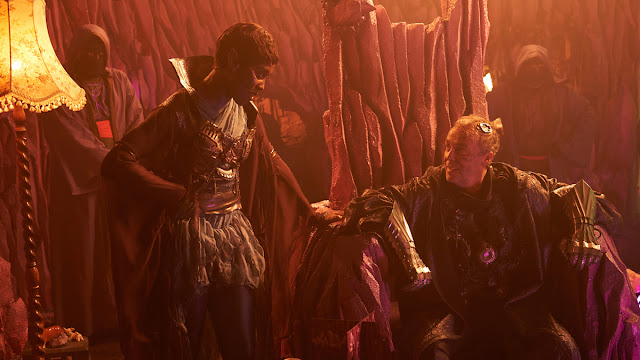 While intentional, however, this aesthetic hamstrings the film’s greatest strength, it’s star. Scott Adkins has made a name for himself as the premiere low-budget cinematic ass kicker of this generation. But because the film’s stylistic approach, his martial arts chops are almost entirely unused, eschewed in favor of stilted, bland action. Scott Adkins fighting space ninjas should be anything but dull. And if that’s not bad enough, the big boss battle happens entirely without Adkins, pitting Jake against Revenger in a tedious Mortal Kombat-inspired death match that, frankly, sucks.

The script, from director Martin Owen and co-writer Sally Collett, hampers things further by padding the threadbare narrative with B-plots. There’s Sarah’s BFF Cowboy (Franz Drameh, Attack the Block), who exist primarily to control her character from outside the game, eat raw hot dogs, and take frequent pee breaks; Max’s pastry chef dreams; a power struggle between Revenger and Shee; a space cowboy bounty hunter (Tommy Flanagan, Gladiator); and some generic father-daughter conflict between Sarah and her dad (Sam Hazeldine, Peaky Blinders). None of it creates much interest or engagement, and it plays like filler to bulk up the runtime. 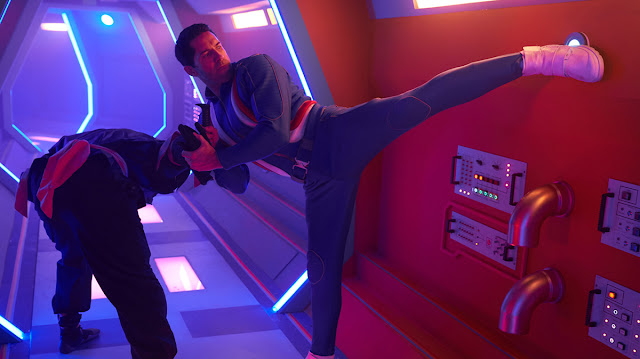 In the notes I took watching Max Cloud, I initially wrote, “This is fun.” A few minutes later I wrote, “This isn’t fun anymore.” And that sums things up, it’s fun and entertaining. Until it isn’t. Fans will get kick watching Scott Adkins chomp and pose his way through scenes, but without the action he’s most known for, that only goes so far and his presence feels wasted. While it boasts an amusing premise, the story is never fleshed out enough to carry an entire film. There’s potential, but the entire film winds up more of a what-if or a what-could-have-been than a movie worth an 88-minute investment. [Grade: C-]

Posted by Brent McKnight at 2:36 PM