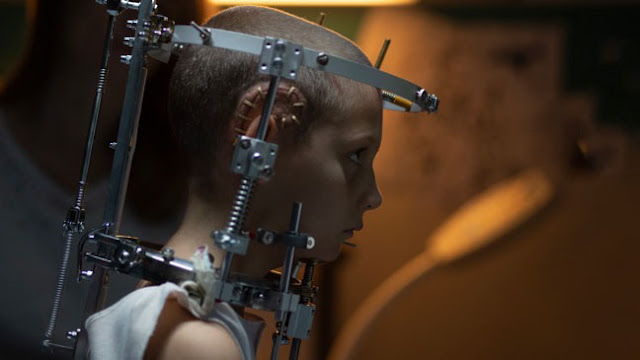 Julia Ducournau’s Raw isn’t just one of the best debuts of the past few years, it’s straight up one of the best movies of the last decade. So, of course, when we hear tell of a new movie from the French director, our ears perk up. NEON just released the trailer for her follow up, Titane, about a long-lost child who all of a sudden returns to the world. But I can’t help but think this also looks a bit like a nightmare Fast & Furious movie. And, sure, what the hell. Check it out below.Obviously this is just a slice of the film, but from what we get in this trailer, Titane looks dark and strange. It certainly appears that thing are all kinds of messed up for the characters that they will probably not have the greatest time.

This teaser comes with this super non-specific synopsis, though seeing what we see, it fits:

TITANE: A metal highly resistant to heat and corrosion, with high tensile strength alloys, often used in medical prostheses due to its pronounced biocompatibility.

Fortunately, a few other details have come out other places, like these:

“Written by the director, the script opens on an airport where custom inspectors pick up a young man with a bruised face. He claims his name to be Adrien Legrand, a child who disappeared ten years ago. For Vincent, his father, this marks the end of a long nightmare, and he brings him home. Simultaneously, a series of gruesome murders places the region under pressure. Alexia, model in a car showroom, has all the characteristics of the ideal victim…”

The film stars Agatha Rousselle and Vincent Lindon, with Dominique Frot, Myriem Akkheddiou, and Rahim-Silvioli Mehdi, among others. Like her previous feature, Ducournau also wrote the script.

Titane is set to premiere at the Cannes Film Festival, which kicks off in July. Though NEON hasn’t announced a stateside release date yet, it wouldn’t surprise us to see this drop in time for the end-of-year awards push.

Posted by Brent McKnight at 7:41 AM