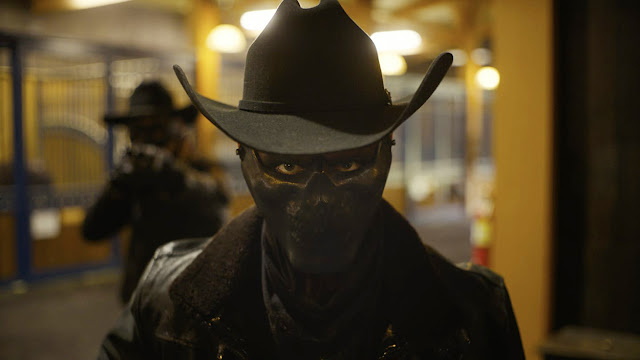 The purest exploitation franchise currently going is back for another (perhaps final, perhaps not) ride, full of heavy-handed political allegory built atop a foundation of gratuitous violence. Never one for subtlety, we expect and receive nothing less from The Forever Purge. You won’t find any unexpected elements, but fans of these films will find much to enjoy.

Last time out, in 2018, we dove back in time for The First Purge, to see how it all began. But The Forever Purge leaps back to the present—ish, anyway, as the saga takes place in a dystopian near-future. The end of The Purge: Election Year saw a new regime come into power, one with the clear goal of ending the titular annual event, the one night of the year where all crime is legal. We pick up the narrative some years after that. There’s been a backlash and yet another conservative swing, the New Founding Fathers of America have been re-elected to power after their ousting and reinstated the Purge. 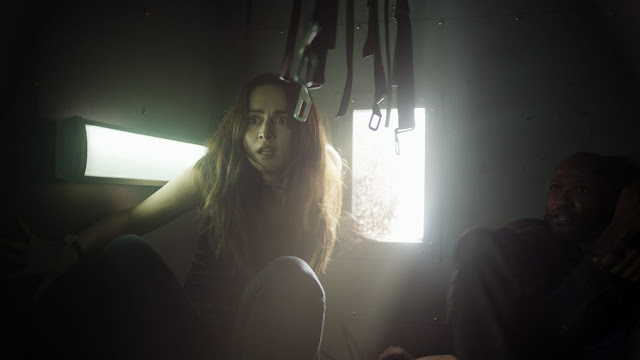 That’s the groundwork. The Purge came and went and came again. As is tradition, The Forever Purgefollows a couple intertwined groups thrown together by this night of chaos. There’s Adela (Ana de la Reguera) and her husband Juan (Tenoch Huerta), a pair of recent Mexican immigrants experiencing their first Purge. Lucky them. There’s also the Tuckers, a wealthy family of Texas ranchers, and Juan’s employers. They include patriarch Caleb (Will Patton), his son Dylan (Josh Lucas), Dylan’s pregnant wife Cassie (Cassidy Freeman), and Harper (Levan Rambin), the youngest daughter.

Here’s how The Forever Purge tweaks the formula a bit. Instead of the Purge ending at the prescribed time, the script from series mastermind James DeMonaco posits, what if it didn’t? What if it kept going and we just Purged all the time? An underground swell rises up and does just that. It plays out a lot like what those January 6th assholes thought was going to happen when they made matching T-shirts to storm the Capitol, like far-right wish-fulfilment. In this scenario, the core characters come together and have to flee the violence. Before long, they head for the welcoming arms of Mexico, which graciously opens her borders to Americans fleeing violence and looking for a better life. But only for a limited time. Like I said, heavy is the hand. 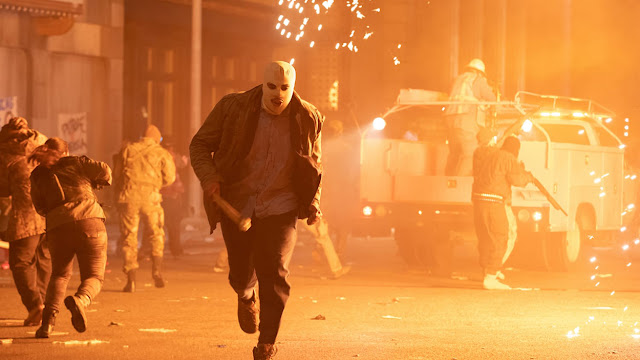 One of the things director Everardo Valerio Gout (Nat Geo’s Mars, TNT’s Snowpiercer) does best is hit the ground running and capture the swirling chaos. With cinematographer Luis David Sansans (Narcos), they immerse the viewer in the bedlam, often using extended one-shots to follow the characters through the running street battles as they seek safety. It gives the action an effective immediacy and intimacy. Though light on character and blunt in theme, in this regard, the filmmakers deliver an efficient, stripped down slice of speculative exploitation, as the franchise is wont to do.

The characters aren’t much, but they do what their types are designed to. Though wealthy, Caleb is a good man, one who treats people well, regardless of race or class, and opines the America that is versus the America he believes it can be. (He’s definitely the #notallwhitepeople stand-in.) And Patton is as good as one might expect. Dylan represents the middle-of-the-road, he hates the Purge, and while not overtly racist, just kind of wishes everyone would keep to themselves. For his part, Juan serves as the “ideal immigrant” trope. He came here looking for a better life, works hard, and is basically a good husband and all-around dude. Everyone else functions as intended—most simply serve as a mouthpiece for a particular stance or train of thought. 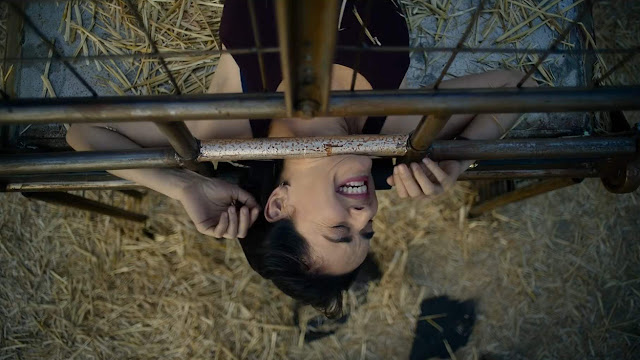 Adela, however, stands out among the crowd as an actual person with real emotions and earnest reactions. She also serves as a strong action heroine, tough, capable, with a mysterious past that, at least loosely, explains her aptitudes with heavy artillery and coolness under pressure. She’s also the only one with a distinct personality. It’s really down to de la Reguera to carry the film, and she does a serviceable job with the material she’s given. Between this and Army of the Dead, I wouldn’t hate to see her front-and-center in more action movies.

The Forever Purge paints with big, broad strokes and little complexity, on both sides of the line. The rich manipulate the poor, the wealthy stoking the flames of bigotry and distrust between marginalized groups, all the while sitting back and exploiting everyone. The eternal Purgers spout all-too-familiar slogans about America being America once again, purification, vague existential threats to a way of life, and all the usual talking points. All of which is, of course, not without modern precedent. But the script extrapolates the scenario to a logical conclusion, the NFFA ultimately destroyed by its own creation run amok. 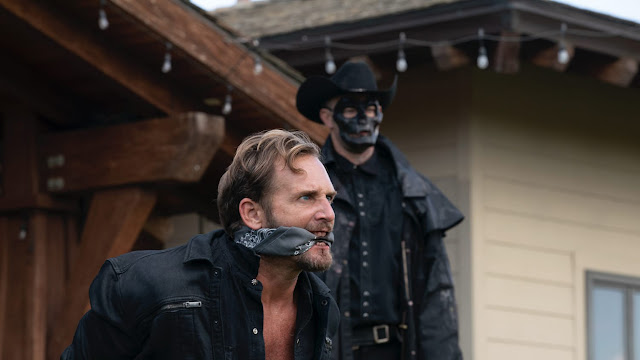 The other end of the spectrum is equally blatant. Like, “Wow, this person who looks different from me treated me like a human being, one with intrinsic value. Maybe I was wrong to stereotype them all and they’re not all bad!” There’s a similar feel to a moment in the episode of The Simpsons where a gay man, voiced by John Waters, saves Homer’s life and in doing so earns his respect. “Now, if every gay man could just do the same, you'd be set.” There’s that level of simplicity, perhaps naivete. But again, subtlety is not what this franchise is historically known for.

And here we come to my weirdest nitpicks: Even as The Forever Purge wallows in the surface malice, it’s also oddly watered down. With a few exceptions, the violence here is a tamer version than we’ve seen in previous installments. We get plenty of gunfire, a few nefarious traps, and hints and nods to various bits of unpleasantness, but even events such as a sledgehammer murder play tame.

[Related Reading: 'The First Purge' Trailer Lights it Up] 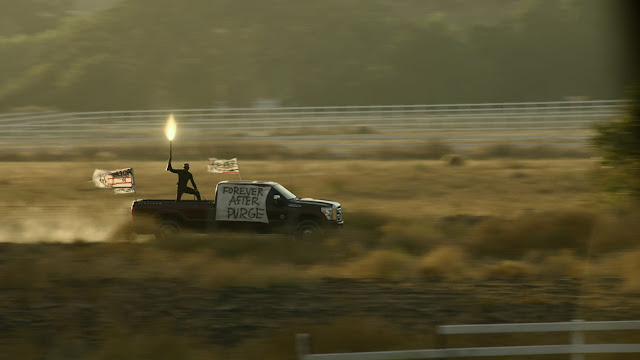 Along similar lines, even as this cinematic world drowns in a rising tide of white supremacy and intolerance, the racism plays tamped down and strangely tempered. A prime example: for all the bigotry on display, you don’t hear typical racial invective or language. Even the guy with a swastika tattooed on his face and the overtly hate-fueled militia completely avoid any known slurs. (What the film opts to use instead is truly comical.) The script wants to play in the muck and the ugliness, but won’t go past a point. As if they want to show racism and violence it inspires, but “those words” make audience uncomfortable in a too-real way and we don’t want that. It’s minor, but an inauthentic, perhaps even disingenuous blip for the film, and an uncanny choice for a series built on pushing buttons. (Yes, I realize it’s strange to say a movie does make the racists racist enough, but in this instance, the film feels less genuine and much tamer than its siblings.)

Like its predecessors, The Forever Purge wears its politics and ambitions on its sleeves. (On its whole damn shirt?) And I love it, and the whole franchise for that. As with earlier chapters, Gout’s movie is wild exploitation with a blunt agenda. Perhaps not the best or most extreme in the series, it gets the job done as an entertaining, tense bit of mostly mean, mostly nasty action with a speculative edge. [Grade: B-]