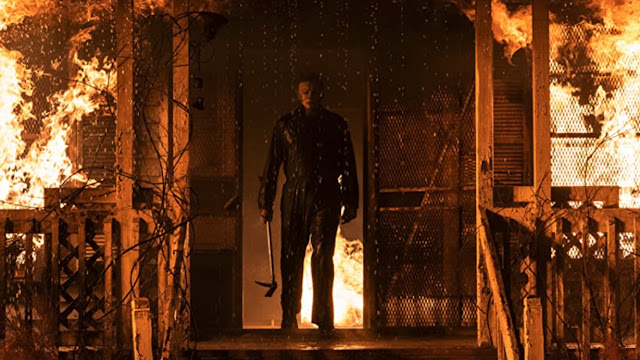 Any good slasher franchise, like it’s evil centerpiece, is going to be damn near impossible to kill. Such is the case with both Michael Myers and the Halloween saga which he spawned. Like every movie scheduled for in 2020, the latest installment, Halloween Kills, was delayed thanks to COVID-19. But Blumhouse wants to remind us it is still stalking toward theaters and released this awesome new trailer.

Just a heads up, we haven’t seen Halloween Kills, but this trailer looks like it gives away a lot. So, watch with caution if you’re spoilerphobic.

Despite what Jamie Lee Curtis says, do we really think evil dies tonight? Especially since there’s already a third chapter of this reinvigoration of the franchise on the way? Our theory is that evil may look dead, but probably won’t stay that way long-term. Just an educated guess.

Other than that, however, Halloween Kills looks super fun. It continues the same night from the last movie, with a town and community, not to mention the Strode clan, fully engulfed in chaos. We get glimpses of the brutal violence as well as a few nice nods to the larger family of films, including the ones these reimaginations largely ignore.

There are even a ton of familiar faces, both in the form of characters and actors. We, of course, get the core trio, Laurie (Curtis), her daughter, Karen (Judy Greer), and her daughter, Allyson (Andi Matichak). But Tommy Doyle makes his return, played by Anthony Michael Hall this time (Paul Rudd played him most recently in The Curse of Michael Myers). Also, Lindsey Wallace (Kyle Richards), Lonnie Elam (Robert Longstreet), Marion Chambers (Nancy Stephens), and Leigh Brackett (Charles Cyphers) return, with all of the actors reprising their respective roles from John Carpenter’s 1978 original. And the creative team of writer/director David Gordon Green and writer Danny McBride are back for more.

And the Halloween night when Michael Myers returned isn’t over yet.

But when Michael manages to free himself from Laurie’s trap, his ritual bloodbath resumes. As Laurie fights her pain and prepares to defend herself against him, she inspires all of Haddonfield to rise up against their unstoppable monster.

The Strode women join a group of other survivors of Michael’s first rampage who decide to take matters into their own hands, forming a vigilante mob that sets out to hunt Michael down, once and for all.

Did we need a continuation of this franchise? Probably not. But are we going to watch the crap out of them as long as they make them? Yes, yes we are.

Michael Myers and Halloween Kills arrives on October 15, 2021, just in time for the titular holiday.

Posted by Brent McKnight at 6:54 AM