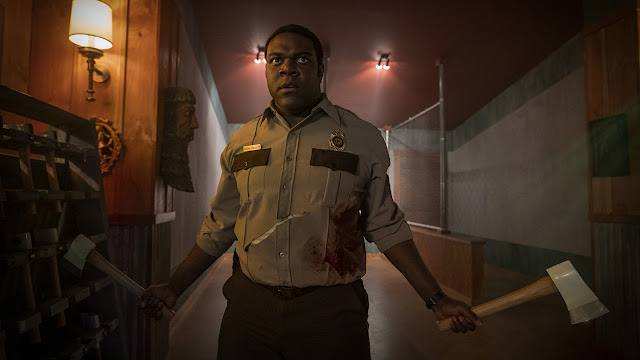 Don’t you hate it when you move to a small town for work and it turns out there are werewolves on the loose? Yeah, that sucks. Unless you’re watching Werewolves Within, the latest from director Josh Ruben (Scare Me). An adaptation of a video game I’ve never heard of, Ruben and writer Mishna Wolff mix scares and laughs in a way that many attempts to do so fail to achieve. Playing like a horror whodunnit, the result is something akin to a lycanthrope take on Clue or Agatha Christie with monsters. (Literal monsters, not the metaphorical human variety, though the film has plenty of those as well.) It’s one of the most fun, entertaining movies to come out this year, and easily a top-tier video game movie.

When forest ranger Finn (Sam Richardson) arrives in the hamlet of Beaverfield, at first it appears his biggest challenge will be to navigate the small-town politics and strife between the cast of eccentric characters, each more outlandish than the next. A proposed gas pipeline, and the accompanying potential lucrative buyout, has split the town into various factions. But when a snowstorm strands all the residents in a local inn, a mysterious creature terrorizes the citizenry, and things go from precarious to all out deadly. 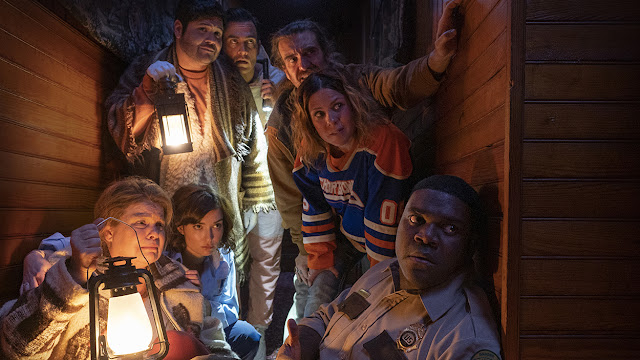 Populated entirely by weirdos and wingnuts, Finn has his hands full simply balancing the personalities. There’s spunky, feisty mail carrier, Cecily (Milana Vayntrub); MAGA chuds Pete and Trisha Anderton (Michael Chernus and Michaela Watkins); Gwen and Marcus (Sarah Burns and George Basil), a pair of foul-mouthed rednecks out for a cash grab; Joaquim and Devon (Harvey Guillen and Cheyenne Jackson), a rich, big-city couple looking for small town tranquility; grizzled survivalist Emerson Flint (Glenn Fleshler), who may shoot you just for delivering the mail; and a slew of other folks, all shady in their own ways.

A grab bag of types and comedic character actors, the focus falls primarily on Finn and Cecily, who share an awkward dysfunctional chemistry and a burgeoning attraction. Finn is catastrophically nice, to the point where it destroyed his previous relationship, even if he’s unwilling admit it’s over. Richardson is the perfect actor to deliver his earnest, aww-shucks sincerity. Cecily could easily have come across as a gossipy, motor-mouthed exposition machine, but Vayntrub, probably best known for a popular series of cell phone commercials, is so delightful and dripping with sarcastic irreverence that she steals the whole movie. 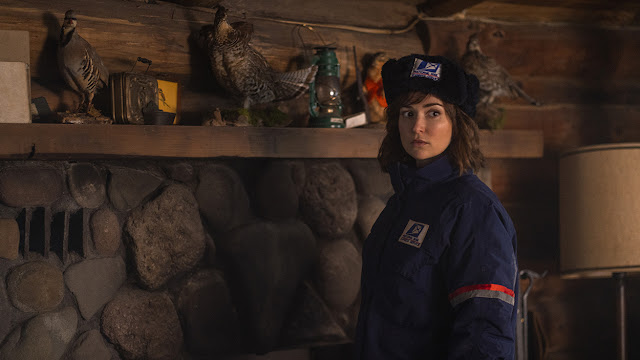 Full of misdirects and red herrings, Werewolves Within unfurls the mystery bit by bit. Sharp and tight, every player hides their own secrets, their own lingering motivations, misdeeds, and provocations. Witty and clever, intricate and tangled, the truth stays obscure and out of sight the whole time, though the script definitely earns the ultimate a-ha reveal. After, of course, a significant amount of bloodshed, terror, and howling laughter.

At its heart, Werewolves Within is a mystery, though one wrapped up in horror movie trappings. Ruben pokes at genre tropes and cliches, toys with class divisions and country versus city schisms, and though never veers fully off formula, tinkers with the blueprint enough so as not to feel stale and executes the rest with clockwork precision. A taut whodunnit, a quirky collection of characters, a few monsters, and a couple standout performances, especially from Milana Vayntrub, and Werewolves Within should satisfy horror fans, amateur sleuths, and those looking for a laugh in equal measure. [Grade: A-]

Posted by Brent McKnight at 9:51 AM