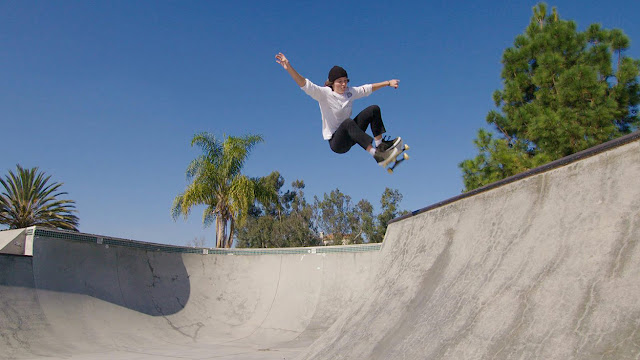 Skateboarding has almost always been a boy’s club. I grew up skating in the ‘80s and almost never saw a female skateboarder outside of a vanishingly rare photo in skate magazines. By the ‘90s when I was in high school a lot of teams had a token female skater and my hometown had a clique of three or four women who would show up semi-regularly at skate spots. (Parks in every town weren’t a thing yet.) Of my core crew of four, there was one woman, but for the most part, she was the only one everywhere we went. But in recent years, women’s skateboarding has exploded in popularity and become the fastest growing demographic in the sport. Jessica Edwards’ documentary, Skate Dreams, tracks that ascent in the in the days leading up to skateboarding becoming an Olympic sport.

More than anything, Skate Dreams is a celebration of women in skateboarding. Yes, it gets into the struggles to break through a male-dominated industry and introduces women who carved out a place for themselves and those who follow where one simply didn’t exist. It looks at the huge disparity in pay and exposure, especially in the era of exponential growth where skateboarding burst into the mainstream thanks to things like the X Games, and the fight for equality in air time and prize money. But the film focuses less on the “this is what we’ve been through” part of the story, choosing instead to say, “look at this amazing thing we built and continue to build.”

[Related Reading: 'All the Streets are Silent' Movie Review]

The real hook is the passion and excitement and enthusiasm of everyone involved. It features interviews with pioneers in women’s skateboarding, like Cara-Beth Burnside and Jamie motherfucking Reyes (coincidentally, two of the only women ever featured on the cover of Thrasher), as well as the current generation, including Olympic hopefuls, aspiring pros, and skaters who ride because they can’t imagine any other life. The film bounces from coast to coast and even to Cambodia to interview a woman who runs a skate camp there. (It also features a stop in Seattle and some footage from one of my regular local parks.)

Skate Dreams prominently features a lot of my favorite things about this weird ass sport that attracts outsiders and oddballs. The individuality and expression of it and how personalities shine through in your style—two people can do the same trick and make it look totally different. The near-fanatical drive and perseverance of any high-level athlete, eating shit time and time and time again to get it right and pushing through. And mostly the love. That’s what truly shines through, the passion and zeal everyone has for this pastime that really, really fucking hurts most of the time—skateboarding is and continues to be so much more than a hobby or sport or even job.

Formally, Skate Dreams doesn’t veer far from the sports documentary formula, but the thrill and elation are so infectious it’s impossible not get caught up. There’s such joy and emotion behind it all, from the history of women scraping and scrounging and kicking through doors to a bunch of skate rats sessioning with their friends and being stoked beyond belief when someone you barely know lands a trick for the first time, that the film is undeniable. I watched this with a giant smile and then immediately went and played skateboards because there was no other choice. [Grade: A]

Posted by Brent McKnight at 9:30 AM