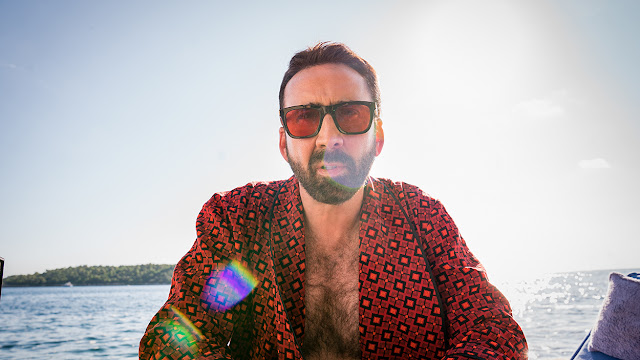 The Unbearable Weight of Massive Talent has one hell of a hook, that’s for sure. Academy Award-winner Nicolas Cage plays a version of himself, hired by a rich super fan to appear at his birthday party. It turns out the fan is also an international drug dealer, and the CIA enlists Cage’s help to take him down. With a concept as undeniably intriguing as this, the question arises: Can they pull it off? Is it a great idea with nothing to back it up? Does it run out of steam when the initial novelty wears off? These problems have derailed many fantastic concepts, but It’s nice to report this mostly hits the mark and is a damn entertaining time.

If Unbearable Weight was just the gimmick, there’d be enough for a sketch or short, but director Tom Gormican, who co-wrote the script with Kevin Etten, creates a strong enough framework that there’s more than just the basic notion to prop the film up. The biggest asset is Cage himself. Never one to phone it in or make uninteresting choices, he’s all-in here, playing a version of himself who’s broke, disillusioned with his craft, at odds with his ex-wife, estranged from his daughter, and generally having an existential crisis. He toes that line he knows so well between campy overwrought scene-chewing and earnest relatable pathos to level out the inherent silliness of the plot. It’s a deft balance of the person he is and wants to be and the public’s perception of him. 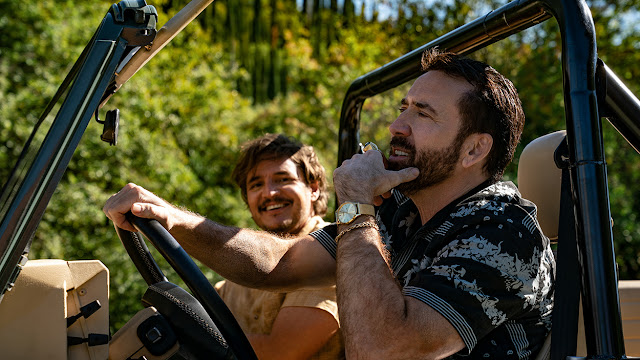 Opposite of Cage is Pedro Pascal (The Mandalorian) as Javi, a rich, charming, debonair business mogul, and Nic Cage mega-fan. Who also happens to be a dangerous criminal. And similarly disappointed with his life. The back and forth and relationship between Cage and Javi drives the entire movie. They have electric chemistry and the on-screen bromance that develops is both a total blast—watching the duo tripping balls is a treat to behold—but also deep and sincere. The rest of the movie is fine, but Cage and Pascal are the beating heart and Unbearable Weight owes everything it achieves to them.

Tiffany Haddish turns up as the CIA agent who recruits Cage, and she’s fun enough if underutilized. Ike Barinholtz as her partner gets even less screen time and only shows up here and here for a couple of wisecracks. We get Neil Patrick Harris for a few scenes as Cage’s agent where he doesn’t do anything we haven’t seen time and again. Sharon Horgan and Lily Mo Sheen play his aggrieved ex and child, respectively, and do what those roles require—they’re not bad, just not written as much more than stock parts. 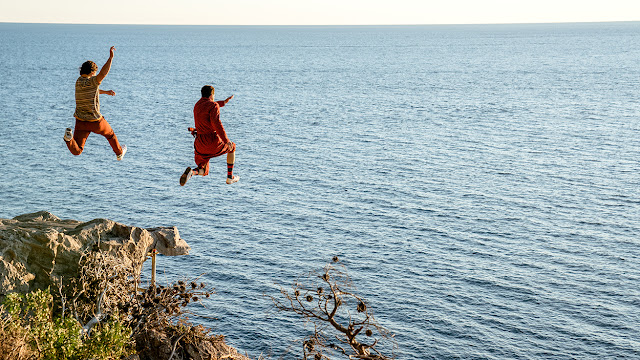 The pace drags in a few spots when the script tries to cram in overly sappy, solemn beats—you know they’re coming and can’t be avoided, but the schmaltz is real and pales in comparison to the earnest, authentic bond between Cage and Javi. The family stuff especially plays wrote and standard; it anchors him, but it’s so standard and uninteresting juxtaposed next to the elements that sing.

Gormican stages a few action scenes that ape key cinematic Cage moments, and the script manages to be refence the actor’s broad filmography and name drop his movies in ways that are clever and playful where it could have gone awry. That might be what the movie does best; it could so easily have become a tedious running bit, but it avoids the obvious and never sinks to being mean. There’s gentle ribbing for sure, but more than poking fun at Cage, this is giddy celebration of everything that makes him awesome and sets him apart from every other actor out there—the affection for its subject is clearly genuine. 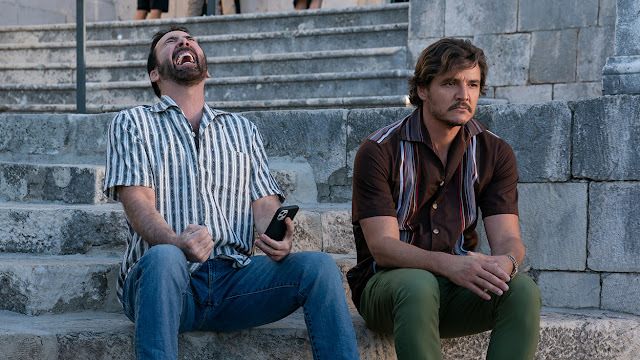 When you hear the premise and imagine what that film might look like, The Unbearable Weight of Massive Talent plays like the best possible version of this idea. It’s clever and charming, adorable and hilarious, and just a goddamned delightful few hours at the movies. [Grade: B+]

Posted by Brent McKnight at 1:55 PM

This movie is very great! Thanks for review!