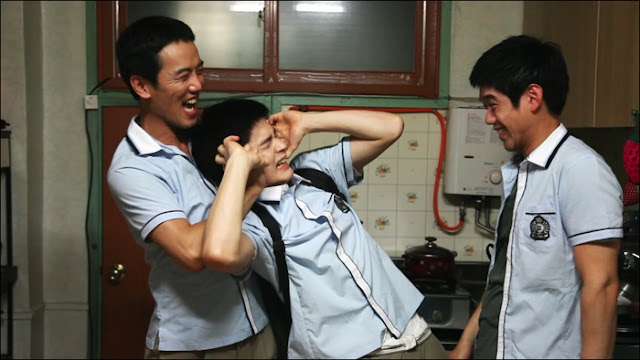 Lee Sung-gong (Nam Yeon-woo) is a wiener. That’s the long and the short of it. As the protagonist of South Korean director Lee Don-ku’s new revenge drama “Fatal” (“Ga-si-kkot”), he is the kind of character that the entire world takes a giant crap on. Everyone, including his so-called friends, pushes him around; he has a glum, dead end, demeaning job; buses don’t even stop for this guy when he stands there waiting to get on. Even little dogs pick on this man. As you can imagine, “Fatal” is a story of him gaining a spine for the first time in his miserable life, and exerting a modicum of power upon the world around him. But it is also a mediation of guilt, compliance, and the lasting effects our actions have on each other.

Sung-gong is submissive to every external factor in every conceivable way. He doesn’t so much make decisions as other people force him to do whatever they want him to. Which is how, as a high schooler, a trio of acquaintances was able to bully him into participating in a hideous attack on a fellow classmate, drugging and raping an unconscious girl. He is simultaneously victim and victimizer, though, as he discovers later, his pain is nothing compared to hers. While his companions seem to have never given this a second thought, the act still haunts Sung-gong ten years later, even though he claims not to have touched their victim. It is endemic of his lack of control of his life and the world around him, a fact emphasized when he is pummeled on the street. Only a true friend starts a fight then leaves you to take the beating.

Searching for some way to quell his demons and atone for his sins—not to mention that he’s driven by an unhealthy dose of desperation—Sung-gong winds up in church. There, finally, he encounters people as spastic and nerdy as himself, in the form of a prayer group. Here’s the kicker, one of the members of the group is Jang-mi (Yang Jo-a), the girl his friends violated all those years ago. Sung-gong sees firsthand the impact he had on her life, the scars and wounds that haven’t, and may never, fully heal. In an attempt to make amends, to be forgiven, but without ever actually admitting compliance in the despicable deed, he inserts himself into her life. He borderline stalks her, even getting a job at the coffee shop where she works.

Plagued by panicked dreams of his past, he has visions of the other three, kneeling and naked, shivering in subservience before the cross and god, awaiting judgment. But while he thinks he’s doing one thing, he’s really living in a state of denial, avoiding unpleasant truths that he’s hidden even from himself. And for her part, for all of Jang-mi’s churchiness and Christian pontificating, she harbors her own hidden issues squirreled away in the back of her mind. Deep dark secrets are at the core of “Fatal,” especially the ones we keep from ourselves. Both of the primary actors display a broad range, going from bubbling awkwardness to crushing despair to cold, cruel malice.

You can feel Lee trying to mold his feature debut to fit into the larger subset of Korean revenge cinema, an almost impossibly high bar. And while the pace is uneven, “Fatal” falls into the school of gradual escalation in tension. The problem is that the tempo flags in the middle as the plot takes some distracting turns, like the church group on a road trip. The scene itself concludes with one of the most intense emotional high points of the film, but it also includes excessive wackiness, like a flatulent minister. For as late in the film as it occurs, there is a bunch of superfluous action that needs to be trimmed. The pace, tension, and arc of the story flat line for a time before escalating sharply as “Fatal” rockets into a violent, destructive, and ultimately satisfying conclusion.

Not the best of the genre by far—Kim Ki-duk’s “Pieta” is a strong recent example, though it, too, is a deeply flawed film—“Fatal” shows a great deal of promise. There are some fine-tuning issues that need to be dealt with, but Lee Don-ku just made it onto a list of filmmakers to keep an eye on in the future. The translation of the Korean title literally means “Thorny Flower,” and “Fatal” is certainly that, one without any easy answers. 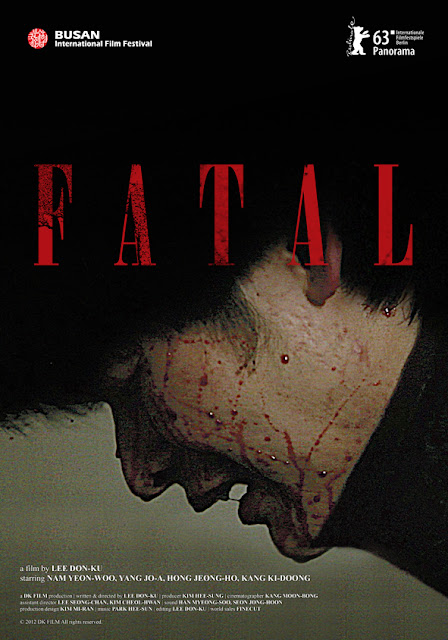 Posted by Brent McKnight at 7:43 PM