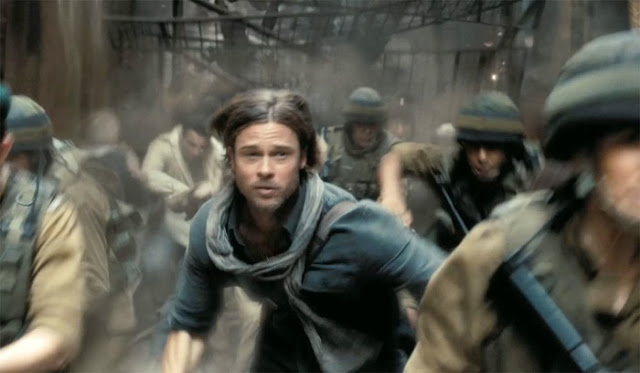 After all the well-documented production problems surrounding the adaptation of Max Brooks’ best-selling zombie novel, including extensive rewrites and weeks worth of reshoots, here’s something I wasn’t sure I’d be able to say: World WarZ is a damn good movie. Far from a perfect feature, but Brad Pitt, Marc Forster, and company, didn’t do too bad. It’s nothing like the book—Brooks was right to call it an adaptation in name only—but if you can get past that fact, the film is surprisingly effective hybrid of action and horror.

Zombie purists—a group I generally count myself among—have issue with the modern trend of fast zombies, undead corpses that can run at full speed. My argument has always been that slow zombies are scary despite the fact that they can’t chase you down in a straight foot race. They’re frightening because of inherent inevitability. You get tired, you run out of food and bullets, you have emotions to screw things up. They don’t have any of that baggage, they just keep coming. Zombies are a force of nature, like a creeping glacier you can’t do anything about. You can chip away a piece here and there, but that’s only a band-aid, a stopgap. There are instances where fast zombies have been effective, 28 Days Later and Zombieland come to mind, but this gradual unavoidability is one of the chief elements that draws me towards the genre.

World War Z plays the best-of-both-worlds game and actually pulls it off, using fast zombies as well as they ever have been. The film explicitly states that these creatures are the spawn of mother nature. Mother nature is also referred to a brutally proficient serial killer, by the way. Watching an overhead shot of a horde of zombie pouring into an open space is like watching water move, filling every available space, backing up when the tide comes to a bottleneck. You can’t help but be reminded of footage of flash floods or a tsunami. From a far away vantage point it looks like no big deal, until the true destructive force becomes clear, and you witness the ruination of everything in its path. In the film these images are harrowing because they feel very real. 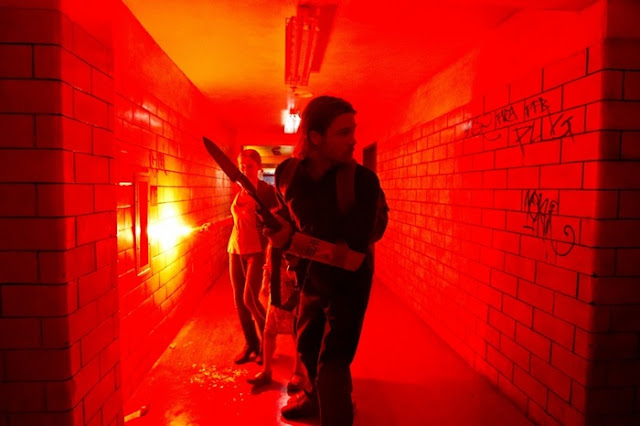 One of the best things World War Z accomplishes is the balance of tension and action. After the briefest of set ups—Pitt’s character Gerry Lane has a perfect life, two perfect daughters, a perfect wife, and just left his job of being awesome for the United Nations, where he went into every dangerous backwater hole you can name—the whole world goes to hell. There are some tried and true, not to mention worn out, horror tropes at work here—like dark, empty hallways full sinister, disembodied sounds and snarls—but Forster does a strong job throughout of pulling the strings and cranking up the pressure.

When action does erupt, it may be too shaky for some viewers. Not nearly as intense or oppressive as a film like Cloverfied, or most found footage horror joints, these scenes throw you right in the middle of the madness. You feel the chaos and disorientation of the characters involved in the melee, and in these moments World War Z creates a very visceral experience. And for his part, Forster has the good sense not to linger too long, lest this tactic prove overwhelming. His approach gives these incidents much more impact than a constant barrage of jittery camerawork.

Brooks’ book doesn’t lend itself to easy translation from page to screen. The story is framed as a series of survivor’s tales collected after the zombie wars. It’s more like reading an anthology of vignettes rather than a novel. The one thing that remains—aside from the zombies of course—is a globetrotting plot structure. Gerry bounds all over the world, from one decimated city to another, in search of patient zero, and hopefully a cure. He’s a very pragmatic, goal oriented individual who sees what’s in front of him, accepts it—in this case, the walking dead—and copes as best he can. 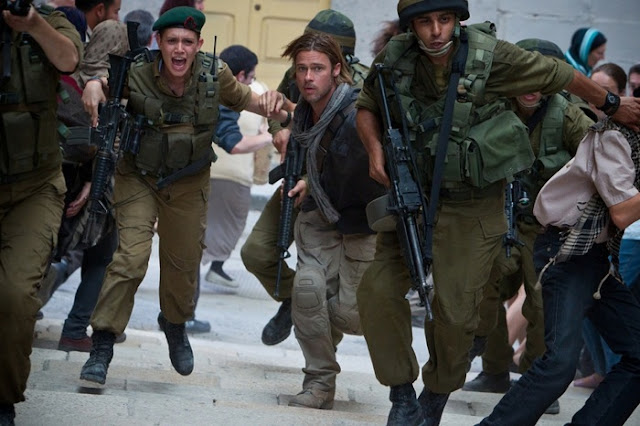 While this is definitely Gerry’s story, and Pitt’s movie, there are some great supporting players to prop him up from time to time. His wife Karen (Mirielle Enos) is a perfect survivalist partner—she just happens to pack flares on what begins as a routine family road trip—and is down to do what needs to be done to protect her family. James Badge Dale plays a no-nonsense, badass military operator with a bleak funny streak. David Morse does a turn as a CIA spook who sold guns to the North Koreans—who may or may not have pulled the teeth of the entire country to prevent rabid biting. And if you’re not talking about Daniella Kertesz, who plays Gerry’s Mossad-trained sidekick he picks up in Jerusalem, you should be.

The script for World War Z went through a number of incarnations. The final act especially had multiple big name Hollywood writers brought in to try and fix it, even after principle photography was complete. Even with all the doctoring, these problems are still obvious in the conclusion. The end they wound up with isn’t terrible, but you get to a point where you wonder what they’re going to do next, then it peters out and leaves you cold. Not the worst ending you’ve ever seen, but it wobbles, makes some questionable choices, and isn’t satisfying at all.

World War Z hints and global politics, but the main attraction is definitely the action and horror. We could spend all day dissecting particular flaws, but a quick pace and balanced delivery ultimately win out and make the movie a blast. Given widespread public concerns, the film turned out better than I hoped. One final thought, there is absolutely, 100%, no reason for World War Z to be in 3D except to take more of your money. No joke, I forgot it was in 3D at one point until I took of the glasses to rub my eyes.

Posted by Brent McKnight at 9:12 PM