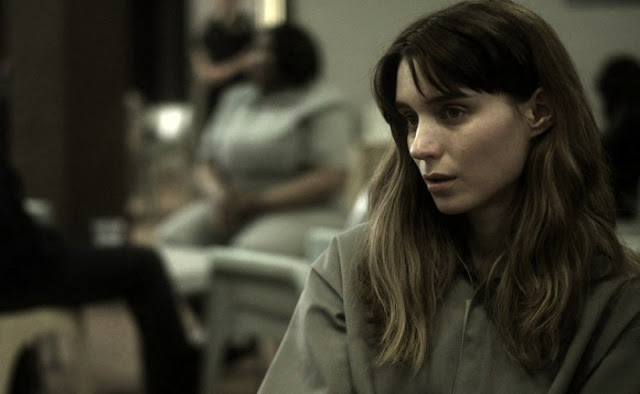 “Better living through chemistry,” quips psychiatrist Jonathan Banks (Jude Law) as he cracks an energy drink before running off to see another patient. Early on in Steven Soderbergh’s Side Effects, Banks is about to meet Emily Taylor (Rooney Mara) for the first time, a woman he will proceed to prescribe a series of anti-depressants to.

The film, now available on Blu-ray, functions on two distinct levels. First, it’s a scathing indictment of the pharmaceutical industry, its practices, and a culture that cares more about the bottom line and selling you another pill to take than with actually fixing problems. Second, Side Effects is a tight, intricate psychological thriller that has garnered comparisons to the films of Alfred Hitchcock—unfolding, turning, and evolving throughout.


Hitchcock is the obvious roadmap here. The similarities are apparent from the opening frames, as a gradual pan and zoom that travels across the skyline, pushing in, placing you in an apartment that is empty, but for a fresh bloodstain on the floor.


Structured in three distinct acts, each with its own individual point and focus, the first follows Emily. Her husband, Martin (Channing Tatum), gets out of jail for insider trading, and her entire life unravels around her. Barely keeping it together, she goes through first one then another and another brightly colored little pill designed to help her make it through the day. Everyone has tried them, all, everyone has the one that worked for them, and everyone is all up in her business about it. Eventually her shrink, Banks, prescribes Ablixa, a new, untested drug with unknown side effects. Mara is fantastic, seamless as she switches gears from doting wife, to seriously depressed and borderline suicidal, to something more sinister.


This is also where Side Effects is most openly critical of our overly medicated society and the habit of reaching for a quick and easy fix. Omnipresent ads for prescription pills line the background, from slick bus posters and inviting billboards to catchy pop ups when you check your email and soothing, serene television commercials. Each one comes with a laundry list of side effects that are almost as serious as the symptoms you’re treating. But don’t worry, there are still more drugs to combat the negative impacts of the other drugs that you swallow on a daily basis.


As Banks is wined and dined by the pharmaceutical giants, Emily wanders through her life like a zombie, until, in the midst of a sleepwalking episode she doesn’t remember, stabs Martin to death in their Manhattan apartment, an act she can’t remember. Who is to blame? Emily? Martin? The drug companies? If the violence was caused by the drugs, then Banks is off the hook. If it wasn’t, then she’s a murderer.


To the film’s credit, Side Effects never takes the easy road, instead pointing an accusatory finger at all sides, at all the pieces that come together. It takes a big picture approach rather than harping on a single thread. And as an added benefit, despite an obvious point and bias, you never feel like you’re being preached to.


For most movies, this would be enough to chew on. Story wise, thematically, there’s a lot going on, but for Soderbergh and screenwriter Scott Z. Burns, who previously collaborated on Contagion, they’re just getting started. In the second act it’s Banks’ turn to come unglued, as his personal and professional life explode as a result of Emily’s trial. His past comes back to haunt him, his marriage dissolves and he, too, searches for someone to blame.


Everything is gone, but Banks can’t let go. And again, Side Effects makes a smooth transition, and becomes a churning cat-and-mouse game of lies, betrayal and corruption between Banks, Emily, and Dr. Victoria Seibert (Catherine Zeta-Jone). The mystery unfolds and resolves in satisfying ways, shifting in ways you don’t see coming.


The Blu-ray doesn’t offer much in the way of bonus features. There’s a three-minute video that purports to be a behind-the-scenes look at the production. In reality this is a short film about the harrowing life these “actor people” face on set, people like “Oscar Loser” Jude Law. An intense, man-voiced announcer prattles on about the sacrifices of working four-hour days, living in four-star New York hotels, and other horrific hardships faced by the cast. It’s amusing, but three minutes of it is just about long enough. Fun little side note: Catherine Zeta-Jones shot this video.


There are also couple of commercials for two of the fictional drugs from the film, Alixa and Intenin. While they’re excellent facsimiles of those ubiquitous pharmaceutical advertisements you see on primetime television, they’re not particularly interesting. You also have access to an interactive website for Ablixa. Again, it’s remarkably similar to the real thing, with commercials, links to studies, and even an interview with Dr. Banks.

Posted by Brent McKnight at 5:44 PM