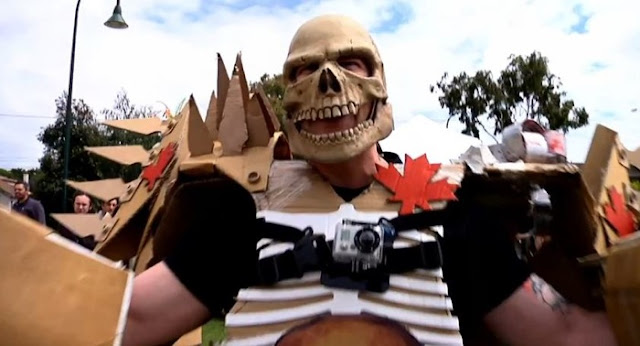 Box Wars, where people dress up in elaborate cardboard costumes and stage massive battles, is definitely a great subject for a documentary. The biggest problem with Justin McConnell’s (“The Collapsed”) new film, “Skull World,” is that it rarely gets beyond the “this is super cool” level of examination and analysis. Which is too bad, and feels like a missed opportunity.

The subject is weird enough that it should have a movie made about it, and Greg Sommer, who is the main focus, is the kind of crazy, infectious wingnut that, as soon as you meet, you want to learn more about. “Skull World” isn’t bad, but there isn’t much substance to it, either. That’s the frustrating part about the film, you see how much deeper it could go, and you want it to, because it’s fun and fascinating, but unfortunately you get to a certain level and never goes any further.

On the surface, Box Wars is simple. People craft ornate, detailed costumes and weapons out of cardboard, gather in large groups, and wail on each other in “Braveheart” style battles. The one left most fully dressed at the end of the melee is the winner. While Box Wars was born in Australia, when Sommer, a Canadian metal head of epic proportions, caught wind of the concept, he ran with it, and has championed the cause ever since.

“Skull World” is really the story of Sommer and his longtime alter ego Skull Man. Passionate, enthusiastic beyond belief, and charismatic, Sommer is also a bit of a madman. The balding thirty-something rents the basement at his mom’s house, works at a cemetery, and, most importantly, lives to rock, and rock large. That’s where Box Wars comes in. He is a nonstop, 24-7, Box Wars promotional juggernaut, and “Skull World” follows him around for a couple of years as he, well as he makes cardboard weapons, hits people with them, and tries to get more people to do the same. 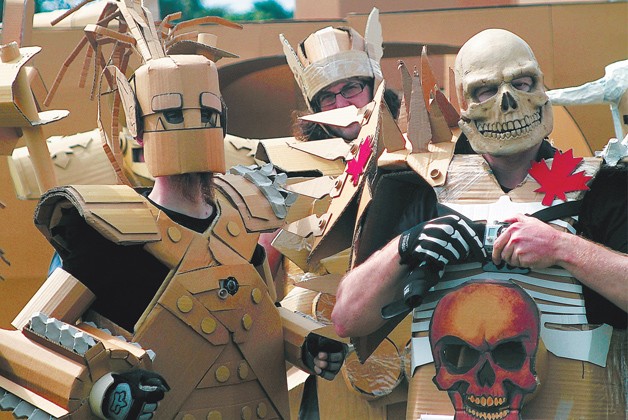 That’s where “Skull World” really fails to cash in on its potential. All the film does is follow Sommer around. He’s super earnest, draws people to him, and makes them believe, but in the end there’s little point beyond, “you gotta rock your life.” The only real obstacle presented is that people don’t know about Box Wars. You expect there to be more, but there never is. You think maybe Sommer will start to question his path after years and years of pushing and pushing, but he never wavers. When he and his friend try to develop a TV show based on Box Wars, but they all have different ideas, you anticipate conflict that never materializes. His mother and friends mention that when the mask goes on, something in Sommer changes, but then the film never mentions that again or examines his psychological make up. Sommer’s overriding philosophy is that it doesn’t matter what you face, but how you face it, but “Skull World” never shows him face much.

At every turn you see what the movie could have done, but it barely even scratches the surface. Box Wars is this all inclusive world where as long as you’re down to dress up, hang out with some likeminded weirdoes, and have a good time without being a dick, you’re a welcome addition. That’s a world worth exploring. Sommer’s friends and well wishers populate “Skull World,” and though they all appear to have their own interesting stories, you never get into what draws people to Box Wars other than the most superficial element. Yeah, it looks like an absolute blast, but you want to know what possesses grown ass people to spend weeks fabricating cardboard armor, only to tear it off of other people. There has to be something beyond “this is rad.”

Fun and friendship are at the center, but you know there’s so much more. You can only follow Sommer around for so long. He gets his tarot cards read, searches for alien life, goes camping, and has battles. Sfter an hour or so, you’re ready for more, something that never comes, and your attention wanes. It’s fun, but there’s nothing more to it than that. At the end of the film, Box Wars is slightly more popular than it was at the beginning, but that’s all you walk away with.

“Skull World” is now out on Blu-ray and DVD. The package comes with more than four hours o bonus features. There are mayhem-fueled deleted scenes, and a ton of extended bits, including the full-length installment of Sommer’s trip to Australia to battle with the Box Wars founders. You also get two feature commentary tracks, one with McConnell and Sommer, while the second is “Skull Man’s Rockin’ Commentary Experience,” which is Sommer’s public person yarling, ranting, and hollerin’ about rockin’ large for an hour and forty minutes. It’s funny; Skull Man talking actually gets into some of the issues you wish the movie dealt with in the first place.