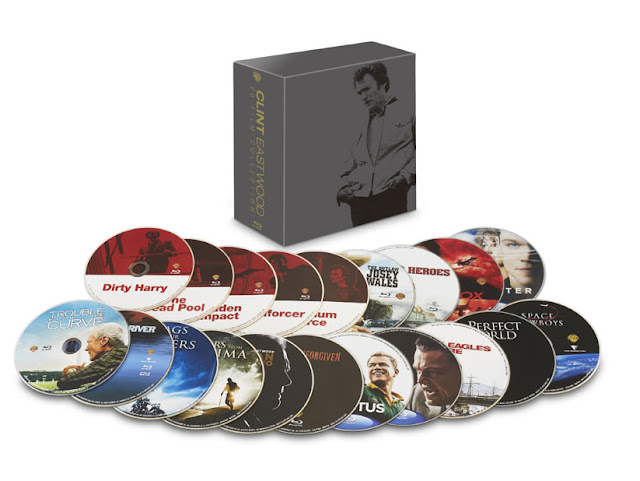 Sure, he may have devolved into scolding empty chairs on stage in front of the entire world at political conventions, but Clint Eastwood is still one of the baddest men on the planet. He’s also happens to be one of the greatest living American filmmakers. Now you can celebrate both facets of his iconic career with the “Clint Eastwood 20 Film Collection” Blu-ray from Warner Bros. This is exactly what it sounds like it, and is just as awesome as you expect it to be. Through the films in this compilation you get to explore Eastwood both as iconic tough guy actor, and as intricate, intimate director.

The exterior packaging on this collection is slick and pretty. Inside is designed to resemble a book, with each individual Blu-ray getting its own “page.” While this is an aesthetically pleasing delivery system, and looks really cool, it is kind of a pain in the ass when it comes to getting the discs in and out. Still, the movies do feel more secure than most boxes where that use sleeves like this, instead of that little peg that holds them in place.

In the “Clint Eastwood 20 Film Collection,” you get a little sample of every genre the man has worked in. On the western side you receive “The Outlaw Josey Wales,” “Pale Rider,” and “Unforgiven.” You get three Dirty Harry movies, “Dirty Harry,” “Magnum Force,” and “Sudden Impact.” There are general tough guy flicks, “The Gauntlet,” “Firefox,” “Heartbreak Ridge,” and “A Perfect World.” And of course, who doesn’t love a man and his monkey, so you add “Any Which Way but Loose” to your home video library.

But that’s not all. I’m starting to sound like an infomercial, right? This set is skewed heavily towards more recent Eastwood—think Eastwood as Elder statesman—with an emphasis on his recent directorial work. There are films like “Space Cowboys,” “Mystic River,” “Million Dollar Baby,” “Letters from Iwo Jima,” “Gran Torino,” “Invictus,” “Hereafter,” “J. Edgar,” and “Trouble With the Curve.” 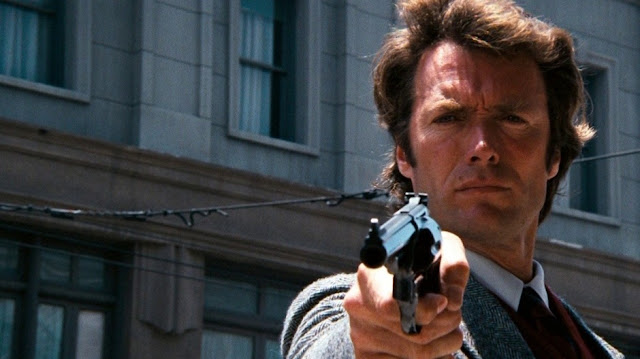 This is far from the first Eastwood film collection that has been released in the last few years. There have been at least two that I know about, probably more, and as a result, there are some obvious omissions here. Whether this is due to licensing issues, or what, who knows, but you won’t find any of the Sergio Leone, “Man With No Name” films here—no “Fistful of Dollars,” “For a Few Dollars More,” or “The Good, the Bad, and the Ugly.” You only get three of five “Dirty Harry” films, “Flags of Our Fathers” is conspicuously absent, and there are other noticeable gaps as well. Granted, you still get more great films than you can shake a stick at, but you should know that this is not an exhaustive compendium, nor is it meant to be. If you approach like that, this box set won’t feel incomplete.

A collection of Eastwood’s movies alone is a pretty damn good reason to pick up this release, but you get so much more than that. While there may be some missing pieces, what the “Clint Eastwood 20 Film Collection” does have, is a crazy, ass ton of bonus features. There are countless hours of the usual suspects, like commentaries, featurettes, and all manner of behind-the-scenes videos, but that is just the jumping off point. The package comes with a 48-page book that is an abridged form of the book “Clint Eastwood: Master Filmmaker at Work.” (The full book is 240-pages.) It comes with a foreword by Morgan Freeman, features words from the likes of Martin Scorsese, Sean Penn, and more film legends. With countless stills from films and sets, it’s a cool glimpse behind the Eastwood curtain.

Continuing on this train, there are two full-length documentaries. The first, “The Eastwood Factor,” was previously released as a bonus feature on the “Hereafter” Blu-ray. This, however, is an extended version of that film, which, narrated by his buddy Freeman, digs into the tough, hard ass persona Eastwood cultivated both in front of and behind the camera.

The crown jewel in this sea of bonus material is the second documentary, the all-new “Eastwood Directs: the Untold Story.” Produced in 2013, it has aired on Turner Classic Movies at the end of May, but this is the first time it has appeared on Blu-ray. Not the most original documentary you’ve ever encountered, it contains new interviews with Eastwood, his collaborators over the years—including actors, writers, producers—and his friends and well-wishers.
Posted by Brent McKnight at 12:44 PM