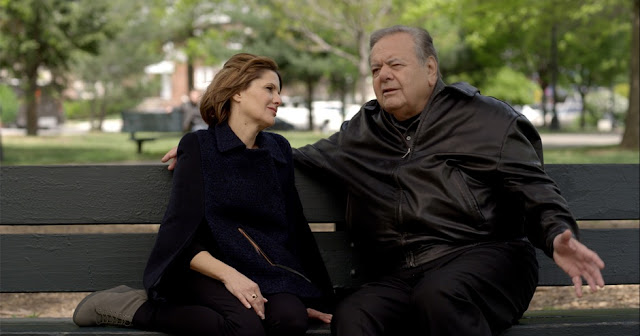 Here’s the beginning of what could have been an awkward story. Seated for the world premiere of “Last I Heard” at the Seattle International Film Festival, I chatted with a guy in my row before the lights went down. I had my notebook out, and the pen I stole from work at the ready as a few more people filled out the row. Others occupied the seats around us, and as I started jotting down the few facts I knew about the movie—gangsters, Paul Sorvino, prison, to be honest, I didn’t know much going in—to remind myself of later, it dawned on me, I was sitting next to stars Renee Props and Andrea Navedo, and had been talking to writer/director David Rodriguez.

Given my present location, I was going to have to stand up to let the entire group by for their post-screening Q and A. There were visions of them asking what I thought and fumbling for an answer and making it obvious that I hated every second of this film they had poured their heart and soul and time into. The first note I scribbled to myself was, God I hope this is good. And lucky for me, “Last I Heard” is damn fine film. That was nice of them, to make a good movie to spare me, some jackass they’ve never met, a potentially embarrassing moment. Very thoughtful.

This isn’t your traditional gangster movie. Rodriguez calls “Last I Heard” a “post mafia” movie, and that is an apt assessment. The violence is kept to a minimum, and this is the story of what happens to the gangsters after the usual gangster movie ends. The film is really a character study of one man, Joe “Mr. Joe” Scoleri (Sorvino), a former captain in a crime family, who has spent the last twenty-plus years in prison. Released due to failing health—he has heart problems, so both you and he know his days are numbered—he finds the world a very different place than he left it. Everyone he knew is dead, in jail, or a rat; his daughter, Rita (Props), is gay, and in a long-term relationship with another woman (Navedo); and where he once walked the streets like a king, now he’s just a sad, broken old man, shuffling around the neighborhood he used to run. Legally barred from interacting with anyone associated with organized crime, his only friend is Bobby (Michael Rappaport). Bobby is a good kid, always was, and though he was never involved in any of that gangster shit, he still holds onto this image of Mr. Joe as a mythic, larger than life figure. In reality, he’s the only one who still gives a shit about who Joe was. He runs his parent’s deli, and has lived next door to the Scoleris his entire life. Earnest, loyal, and eager to please, Bobby easily falls into role of confident, friend, and errand boy, driving the old man to the doctor and picking up his prescriptions. The two actors are great together on screen, and the characters form an unlikely friendship.

“Last I Heard” is at its best watching Joe struggle to come to terms with how the world has shifted in his absence. Prison changed him, but to what degree? He has to learn to live with the mistakes he’s made, and the terrible things he’s done to people in the past, including his own daughter. It’s also hard to come to grips with the fact that he’s not in charge anymore. There are times when he treats Bobby more like one of his underlings than friend, or even a well-intentioned neighbor doing him a solid. Along the way to realizing what’s truly important and what he needs to let go, Joe makes strides, has set backs, says and does the wrong thing. Sorvino, and by extension Joe, may shamble around like an old man, but he still maintains that air of menace and authority that have made him such an icon of the genre. One moment he’s a tough, old school hood, the next he’s weeping.

There are some issues in “Last I Heard” that could stand to be smoothed out. For instance, right out of the gate, as Joe leaves prison, there’s an unnecessary pop up on screen that gives you a mini bio. Heavy handed, you just don’t need it. You don’t learn anything the script doesn’t tell you soon enough, and since this is the only place it happens, so it feels clunky. Joe’s parole officer (Stephen Bauer, “Scarface”), and the two FBI Agents (Hassan Jones, “The Wire,” and Kevin Kelly) that pester Bobby for getting too close to the old man, are strictly stock, only say stock cop things, and don’t bring much to the table. And you hear a few too many times what a big deal Joe was back in the day. That point is abundantly clear, and you don’t need to watch Bobby and his wife, Michelle (Andrea Nittoli), reminisce about him nearly as often as they do.

These, however, are minor trespasses in the grand scheme of “Last I Heard,” and once you get past a few bumps at the beginning, and dive into the real meat of the story, any rough edges are forgivable. A fantastic cast—that also features Chazz Palminteri, Lev Gorn, and Johnny Williams—comes together to create a funny, poignant portrait of a man trying to cope with his past, and a present he doesn’t fully comprehend.

Posted by Brent McKnight at 6:05 PM