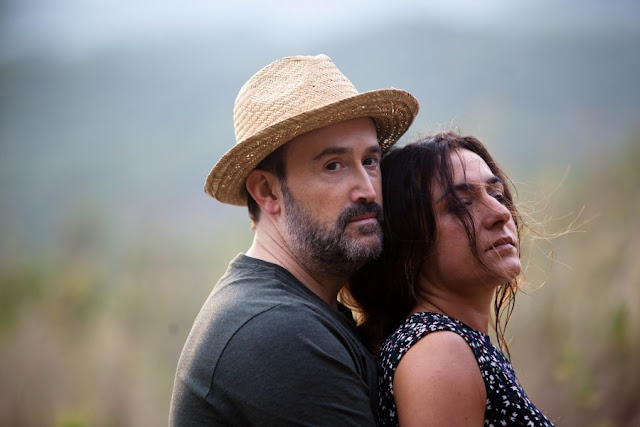 One of the key components in speculative fiction is imagining various potential futures based on the current state of the world. In her new film, Yesterday Never Ends, Spanish writer-director Isabel Coixet’s (Map of the Sounds of Tokyo) takes the current economic crisis in her native country and extends it by a decade, out into the year 2017. In this iteration, the crisis worsens, taking the entire country down with it. Unemployment is at seven million, civil unrest runs rampant in the streets, fiscal cut backs hamstring every social service, and the government is powerless to do a damn thing about any of it.

Into this not-quite-dystopian frame Coixet drops two people. Jaime (Javier Camara, Bad Education) and Christina (Candela Pena, All About My Mother) are the only two people in the entire movie, aside from a couple of faceless news reporters in the opening moments. This is a bold move, and if you’re going to have a 90-minute feature with only two people, you better have some serious confidence in your material.

In the case of Yesterday Never Ends, this choice is a double-edged sword, and while the fact that you only ever meet two people makes the film unique, it also causes it to stumble. At its best the film is a poignant meditation on loss, pain, depression, and attempts to escape the traps of your past. At its worst, this is a portrait of a bitter former couple bickering, arguing, and doing their best to injure one another as grievously as they possibly can.

Through the interactions between Jaime and Christina, waiting for someone who it’s clear early on is never going to arrive, Coixet peels back layer after layer of their story through subtext-laden dialogue. The initial pleasantries of estranged lovers who haven’t seen each other in five years, give gradual way to hidden resentments as the scabs of still fresh wounds are scratched off. A college professor, Jaime left Spain, and Christina, and headed Germany for economic reasons, as well as to escape the tragic death of their child. While Jaime moves on, physically if not emotionally, Christina remains, wallowing in the pain of their tragedy.

Though this is a very specific, very contained story of two people, the exterior world seeps in and colors the narrative. Their son, Dani, died because hospital budgets were slashed to the point where, by the time he saw a doctor after waiting for five hours, it was too late. In fact, the entire reason for Jaime’s return to Spain is because the cemetery where the boy is interred is being dug up so the land can be used to build a casino. Jaime’s reaction to these political and economic realities is to evade and avoid. Christina however takes another tack. Grief awakes a radical spirit in the former translator. She lives in her car or squats, and the implication is that she’s a part of the bombing campaigns alluded to in the opening of the film.

For all of the engaging, admirable moments, Yesterday Never Ends is wildly uneven. The harried, exhaursted performances from Pena and Camara are fantastic. Their chemistry—totally believable as embattled exes—and the secrets they keep from each other, are what keep you invested, and what propels a movie that is, unavoidably, hamstrung at the outset.

While it bears some of the hallmarks of the genre, Yesterday Never Ends isn’t exactly science fiction in a traditional sense—though it did have its North American premiere as part of the Seattle International FilmFestival’s “Sci-Fi and Fact” program. Sure, it shows one potential outcome of the present, but this is much more concerned with the relationship, or lack thereof, between Christina and Jaime. The exterior world is secondary, and you often forget that this is supposed to be set in the future. While you don’t, and shouldn’t, rely on movies and filmmakers to offer iron clad solutions, walking away from Yesterday Never Ends—a film that seeks to reveal issues rather than solve—you’re left wondering what’s the ultimate point?

Posted by Brent McKnight at 6:57 PM