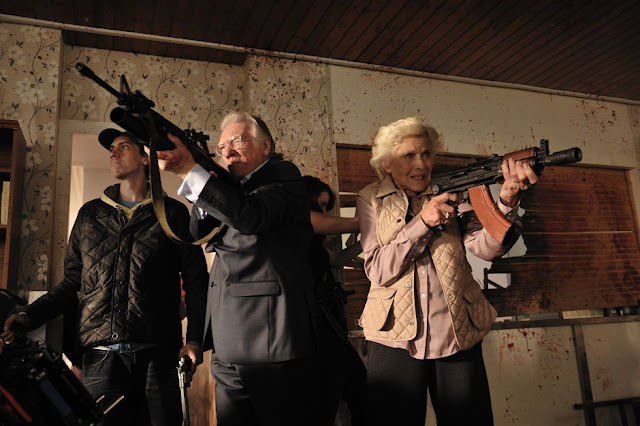 Haven’t you always wanted to see a bunch of cranky, foul-mouthed octogenarians have it out with swarming hordes of the undead? If so, you’re in luck, because the world now has Matthias Hoene’s “Cockneys vs. Zombies” to play with. Not the most technically proficient horror movie you’ll ever see—the story is predictable every step of the way, for one thing—but what the movie is, is a goddamned blast. Sure, it’s cheap and hokey, but there is gore, guns, and screaming senior citizens, all of which infuses the movie with a giddiness that makes you want to clap your hands and squeal like an imbecile. This isn’t looking to balance horror and comedy. The intent here is definitely skewed toward laughs, though laughs soaked in blood and viscera.

“Cockneys vs. Zombies” is similar to “Attack the Block” in at least one sense. Not quality wise—in that regard they’re worlds apart—or in the sense that there’s legitimate emotional connection with the characters. But in the way you can practically see the filmmakers sitting around, maybe having a few pints, asking that age-old question, what would happen if…? In that way they feel like cousins. For “Attack the Block” it was what if aliens invaded the hood, and in “Cockneys vs. Zombies,” the central question is, how would a bunch of cantankerous old fucks handle a bunch of shambling cadavers? Right here is where we insert a joke about them already being pretty close to walking corpses themselves.

In the tough, blue collar East End of London, brothers Terry (Rasmus Hardiker) and Andy’s (Harry Treadaway) grandfather, Ray (Alan Ford), is about to be kicked out of his low-rent retirement home so the land can be turned into a luxury high rise. The only way to prevent this is for the inept duo to pull a heist—someone broke into their flat and stole the money they had saved up through legitimate means. Being generally good-hearted kids, though Andy does get Terry into sticky situations on the regular, they have no clue what they’re doing. So they enlist the help of their dimwitted pal Davey Tuppence (Jack Doolan), who once got pinched by handing over his shotgun to the person he was robbing; their cousin Katy (Michelle Ryan), an attitude filled, tough as nails lock pick; and Mental Mickey (Ashley Bashy Thomas), a psychopathic arms dealer with a penchant for head-butting anything in his path, animal, mineral, vegetable. 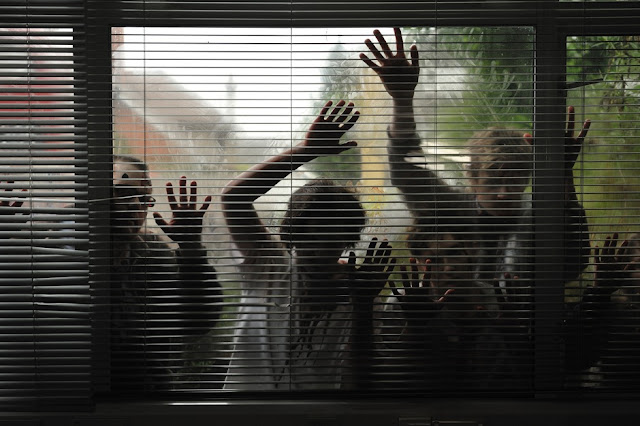 After meeting this particular bunch of bandits, you know immediately that their robbery won’t resemble the plan in any way, shape, or form. Not that there was much of a plan to begin with. Lucky for them, after the job goes awry and the cops show up, the zombies arrive to clean up the mess for them. What a fortunate coincidence. As they attempt to wade through the walking dead to rescue their granddad and his wrinkled pals, who are holed up in their home, you know exactly what’s coming. There is nothing particularly original going on here, however, you do witness one of the most entertaining chase scenes in zombie lore, as a geriatric with a walker shuffles away from zombies, which shuffle at a similar speed.

A likable cast is what really makes “Cockneys vs Zombies” as much fun as it is. If not for them, the fact that you’ve seen this story a thousand times would probably bother you. Even the characters know they’ve seen this before, and after accepting that this is a zombie outbreak with a barely a shrug, they set about doing what you do in such a situation. Terry, Andy, and Kay banter like an ornery family, Davey does stupid shit at every given opportunity, and Mickey acts like an absolute madman. Meanwhile, at the old folk’s home, shit is getting real, and dear old granddad isn’t above fist fighting a walking corpse. And for the most part, the pace is swift—again, slowing down would only lead to problems.

There are a couple obligatory attempts to insert emotion and tragedy into the script, all of which cause the tempo to flag. Fortunately these are sparse, and kept brief when they do pop up. The filmmakers know this ain’t “Shaun of the Dead”—which may have the best balance of horror, comedy, and legit emotion of any movie out there—and they never linger for long. And that’s good, because, likeable as they are, you don’t particularly care if any live or die. The river of emotional and psychological investment runs rather shallow.

“Cockneys vs. Zombies” is nothing you need to think too hard about, or ever watch again, but as a fun one-off, it isn’t bad. Some out there aren't huge fans, which is a sentiment I totally understand, but I enjoyed this despite the obvious shortcomings and limitations. I definitely prefer my zombies to fall more in the horror category—few and far between are the films that pull off the horror-comedy—but “Cockneys vs. Zombies” is still raucous and gory enough to be a damn entertaining time.