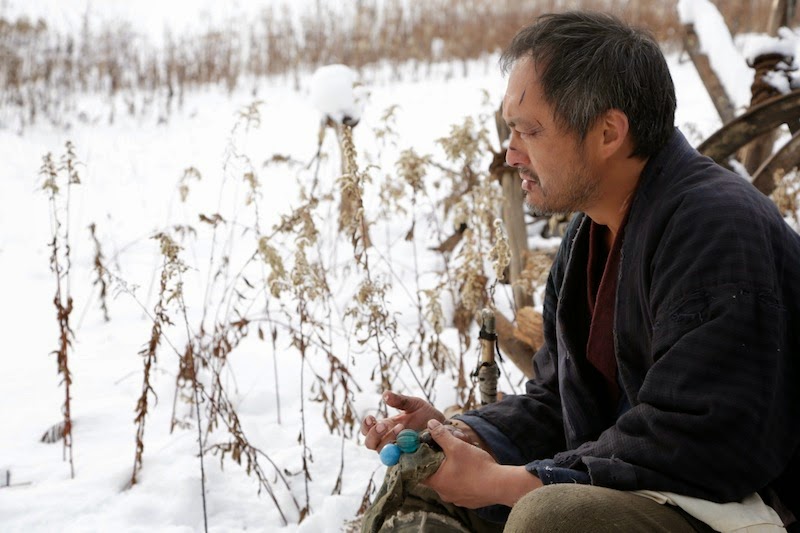 When we discuss a remake, we’re usually talking about an American revamp of a foreign movie. Hollywood sure does love to borrow plots and characters from Eastern cinema, from “Seven Samurai” and “Yojimbo” to “Oldboy” and, most recently, another stab at the “Godzilla” franchise. Well, this East-West cultural exchange is, in reality, a two-way street. Granted, most of the traffic flows in a single direction, but that doesn’t mean there aren’t occasional cars headed the other way from time to time. This is the cast with Sang-il Lee’s (“Villain”) remake of Clint Eastwood’s western “Unforgiven.”

To say this new version is as good or better than Eastwood’s film is crazy talk, the 1992 is a modern classic that is every bit as poignant and powerful as the day you first saw it, but Lee’s film is an admirable effort and a strong movie in its own right. Plot wise, the two films are almost identical, but the seamless way the subject translates from American history to Japanese history is interesting to look at. Instead of the American West, the story takes place in Hokkaido, the largest and northernmost island of Japan, which stands in for the remote, lawless frontier. Lee even draws easy parallels between the way US expansion attempted to eradicate not only the indigenous people but also their very culture, only in this instance it is the Ainu people, not Native Americans, who bear the brunt of the oppression. It’s also fun to see swords interchanged with guns from time to time, including a classic western showdown, swordsman style.

Jubei (Ken Watanabe) is a former samurai, a reformed killer of a unique and particularly vicious variety. Those days are behind him, however, and now he lives the simple, isolated life of a farmer, something he’s not particularly successful at. Watanabe is nowhere near as grim and grizzled as Eastwood in the lead role, but he’s still a similar kind of badass. When an old war buddy, Kingo (Akira Emoto), comes by, looking for a partner in a bounty venture that means killing two men who badly slashed the face of a prostitute, Jubei reluctantly goes along. Their quest throws them in direct conflict with the local constabulary, Ichizo Oishi (Koichi Sato), a man every bit as brutal and ruthless as they used to be.

If you’ve seen Eastwood’s “Unforgiven,” then you know what to expect. Like I said plot point for plot point, the films are almost identical. As are the themes, but thanks to great performances across the board, it never feels stale or repeated. For all of the external clashes, the real battle is the one that rages inside of Jubei. The man he was and the man he has become tear him in multiple directions, and as their journey continues, he finds it increasingly difficult to stamp down his darker, violent tendencies that ruled so much of his life. The promise to his dead wife that he had changed butts heads with the fact that without this money, he and his children might not be able to make it through the brutal, bitter winter that looms on the horizon.

“Unforgiven” is unflinchingly violent, and, like its predecessor, never shies away from the harsh realities of life on the frontier. This includes the internal world of the characters as well as their external realities. Sure, their feelings and emotions may not cut their faces with broken glass or shoot them while they’re on the crapper, but they leave different kinds of scars that are just as harsh. This is a story about the unpleasant things you have to pick between, the consequences that result from those choices, your legacy, history, and revenge, among so much more.

In addition to being brutal and layered like a thematic onion, “Unforgiven” is also stunning to look at. The cinematography is absolutely gorgeous, and Lee’s camera captures the natural beauty of Hokkaido, where the movie was filmed on location, and he also fills the frame with stark images of barren winter landscapes. Though many of these pictures will translate to a smaller screen, especially on HD, if you have the chance, you should try to experience this film on the big screen. I was lucky enough to be able to catch a recent screening at the Seattle International Film Festival, and if you get the opportunity, you should jump at the chance.

Posted by Brent McKnight at 5:43 PM