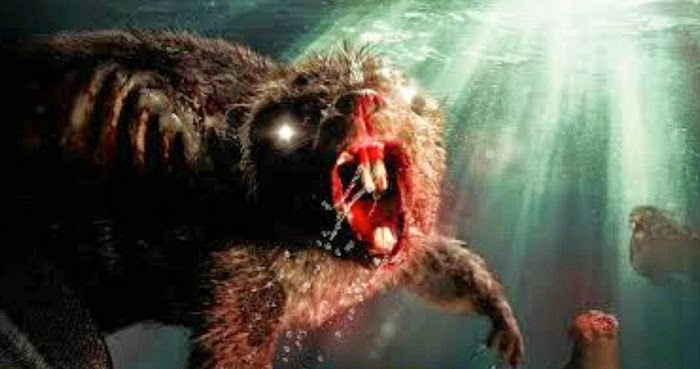 If you buy a ticket to a movie called Zombeavers, odds are you know exactly what you’re getting yourself into. At least you should, if you don’t, and you complain about it later, you only have yourself to blame. There is a good litmus test, however. Read the title out loud, and if you giggle, this is a movie for you; if not, you should probably sit this one out. And if you fall into the first category, I am pleased to report that Zombeavers is as much of a blast as you could hope for.

Director Jordan Rubin’s homage to schlocky, low-budget 1980s horror is tailor made for an endless run of late night screenings. Full of gore, crude and absurd humor, gratuitous nudity, and, most importantly, swarms of undead beavers, this really does everything you want out a movie like this, and is light years ahead of churned out crap like Sharknado. As ridiculous as it is, you can tell the filmmakers actually put in a great deal of thought and effort. If you’re fan of movies like Piranha 3D then this is a movie for you. If nothing else, you’ll want to schedule a “safety orgy” with five of your closest friends ASAP.

The set up is the same as countless horror movies that have come before, and the details are incidental at best. A group of horny college kids go for a weekend at a remote cabin in the woods, they party, they hump, they get slaughtered. In this case, the slaughterer is a crew of normally peaceful beavers infected by a chance encounter with a canister of mysterious medical waste. There are creepy rednecks, gratuitous nudity, and hokey practical creature effects that are tonally perfect. All of the people are genre types—the good girl, the hot nerd, the bitch, the jock, the jerk, the obnoxious bro dog—and terrible people to boot, but they do exactly what they’re designed to do. Character wise, the one thing Zombeavers does that’s interesting is keep you guessing about who will survive, and you don’t wind up rooting for the person that you immediately expect, so there’s that.

This isn’t a spoof or even a winking tribute. Zombeavers plays the action totally straight, which makes the humor that much more outrageous and funny. The sorority sisters don’t know they’re in a horror movie, no one makes snide jokes about playing real life whack-a-mole when the beavers start popping up through the floor of the cabin, and every obvious double entendre is delivered with complete earnestness. It toys with all of your favorite horror tropes, like POV shots of a killer watching its victims through the trees.

Movies of this ilk have one huge Achilles heel that, more often than not, causes them to crash and burn in spectacular fashion. They don’t have enough substance, light at is may be, to fill up the space of an entire movie, like there was a great idea, but little follow through. After starting well, they stumble in the middle, meandering about, trying to figure out what to do next, and lose your attention. Or worse, the down time gives you a chance to actually think about and consider the absurd nature of what’s happening on screen, and that’s never a good thing.

Zombeavers, however, never falls into this trap. The action kicks off fast, things escalate and get out of control quickly, and the complications continue to ratchet up exponentially. Throughout the 85-minute run time, the pace never sags for a moment, and the script even manages to pull of a solid twist, changing direction in the final act. Sure, there are pissed off, zombified beavers running amok, chewing the shit out of everything and everyone they see, but eventually things get even worse, if you can believe that.

If anything you’ve just read sounds even slightly enjoyable to you, do yourself a favor and find the closest showing of Zombeavers you can find. Run, don’t walk. If the recent screenings at the Seattle International Film Festival are any indication, there will be a substantial line and lots of likeminded folks in the theater with you. It’s worth watching just for the lounge song that plays during the end credits that recounts the entire plot. Somehow those vindictive beaver bastards sound so much more adorable in the dulcet tones of a silver-throated crooner.

Posted by Brent McKnight at 1:29 PM